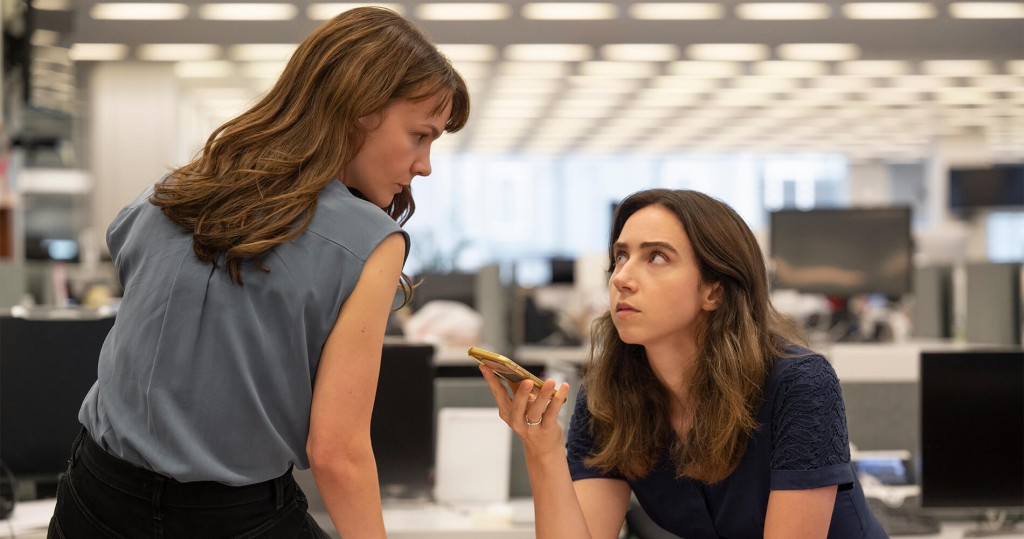 She Said, which chronicles the 2017 New York Times investigation into workplace harassment perpetrated by Harvey Weinstein while at Miramax and The Weinstein Company, serves as a fitting conclusion to what I’ve dubbed “The Carey Mulligan ‘Men Behaving Poorly’ Trilogy.” Much like its spiritual predecessors An Education and Promising Young Woman, She Said promises to deliver Mulligan serving men their comeuppance with a side of wry wit.

Unfortunately, it delivers only the shallowest satisfaction.

The film follows Jodi Kantor (the ever-charming Zoe Kazan) and Megan Twohey (Mulligan) as they begin a working relationship while desperately searching for former Miramax employees willing to go on the record about the abuses they suffered during their employ. It’s a winner on paper: strong cast (rounded out by Andre Braugher, Patricia Clarkson, Samantha Morton, and Ashley Judd as herself), a storyline that gripped the nation, and the gravitas to bring audiences to the theater when their only other option is the latest Marvel epic.

While the movie starts strong, interweaving flashbacks from Weinstein’s various victims with the journalistic narrative, it devolves into a chore to watch.

There are glimpses of a bond between Kantor and Twohey (in one scene, they meet up to interview a potential whistleblower while wearing strikingly similar outfits; “Reporting twins!!” they giggle). However, there is no “Dustin Hoffman and Robert Redford playing Woodward and Bernstein in All The President’s Men” here. There isn’t even “Will Ferrell and Bruce McCulloch as Woodward and Bernstein in 1999’s Dick.” Kazan and Mulligan try their best to overcome two hours of stilted dialogue, but never truly sell it.

The film also suffers from its non-fictitious nature—we know Weinstein was convicted of rape and predatory sexual assault, and he’s currently on trial in Los Angeles for more of the same. There’s rarely if ever a tense moment in the film.

She Said does deliver some pleasant surprises in its small, arguably inconsequential details. There are scenes where the protagonists are on the receiving end of anonymous phone calls threatening violence. Scenes where the protagonists sneak out the door to go to work, and have FaceTime calls with their daughters. There are zoomed-in shots of Twohey and Kantor, the sole figures remaining in an otherwise dark office. The film serves as a touching snapshot of what it feels like to be a working woman in America in the 21st century (that is, if you’re white, middle-class, and write for the largest publication in the country).

She Said may serve as an accurate summary of the legwork Kantor and Twohey did to shine a light on the injustices overwhelmingly inflicted by powerful men of an older generation. However, it’s hard to see a movie solely interested in regurgitating the details we already know as anything other than Hollywood patting itself on the back.