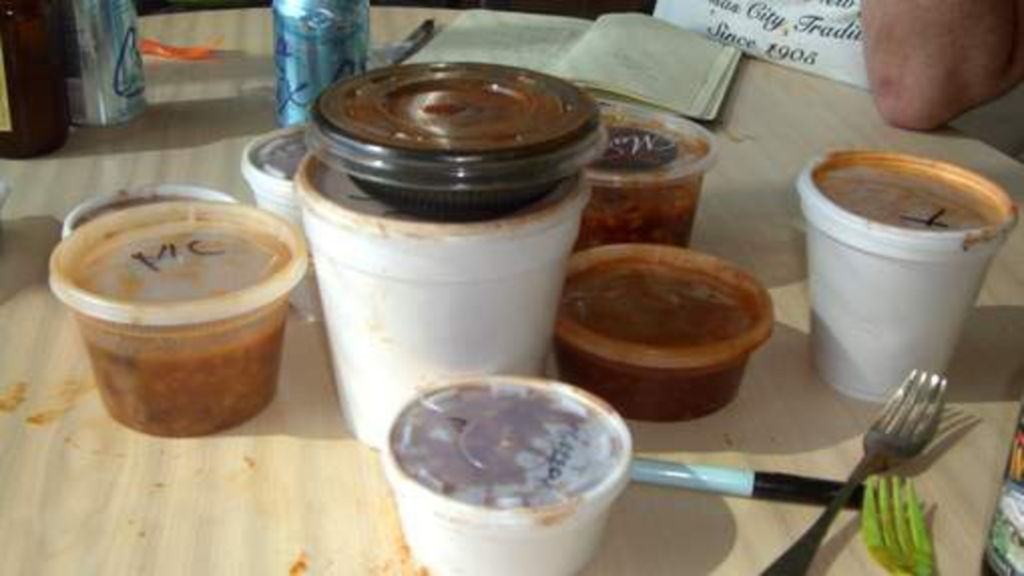 Until today, we just assumed that everyone loved baked beans. But as Charles Ferruzza, Owen Morris and new Fat City blogger Jonathan Bender discovered — thanks to erudite Pitch music editor Jason Harper — that no less an authority as Pythagorus opposed the consumption of beans (he wouldn’t touch meat either, based on the principles of reincarnation). The poet Callimachus wrote: “Keep your hands from beans, a painful food: As Pythagorus enjoined, I too urge.” Callimachus, however, did not write: “Beans, beans the musical fruit/the more you eat, the more you toot.”

Tooting right along, what’s a Fourth of July celebration without baked beans? It’s un-American! That’s the reason Fat City’s Ferruzza, Morris and Bender (with some assistance from Jason Harper and Crystal Wiebe) tasted eleven different varieties of baked beans — not the Boston Baked version, but the traditional barbecue joint staple — from many of Kansas City’s more iconic barbecue restaurants.

We immediately crossed the beans from Fiorella’s Jack Stack Barbecue off the list because our carry-out container of baked beans was heavy on the sauce, seriously light on the legumes and practically meatless.

Here are our choices and rankings for the Top Ten Baked Beans:

10) Greedy Man’s BBQ, 5536-A Troost. So thick, glossy and rich with molasses sweetness that they come the closest to Boston baked beans in consistency and taste. Extremely dark in color and light on beef. The overwhelming taste? Sweet, very sweet.

9) McGonigle’s Market, 1307 W. 79th Street. The outdoor smoker in front of the store puts out some excellent smoked meats, but the baked beans got mixed reviews from our panel. The legume purists in the group didn’t like the mix of different varieties of beans (including lima beans, which Charles detests) and it didn’t contain much meat. One taster thought the sauce had a “coffee aftertaste.” Owen noted that allspice seemed to be the dominant seasoning.

8) Cosentino’s Brookside Market, 14 W. 62nd Street. The meatiest, by far, of any of the baked beans tasted, well-seasoned, packs a little heat, not as sweet. A good blend of spices but this was underwhelming, lack any smokiness that defines a true baked bean.

7) Oklahoma Joe’s Barbecue & Catering, 3002 W. 47th Street, Kansas City, Kansas. A beloved spot of all of our tasters, the baked beans are, again, a blend of legumes — including black beans, which make a pleasing visual note —  and the sauce — which has some heat — is splendid; Owen detected a strong note of cumin.

6) Gates Barbecue, many locations. Excellent, sassy and smoky beans. Not a hell of a lot of meat, but well-textured and delectably-seasoned. But like all things Gates barbecue, these were divisive. If you love Gates sauce, you’ll love the beans as well. If you don’t, then best avoid.