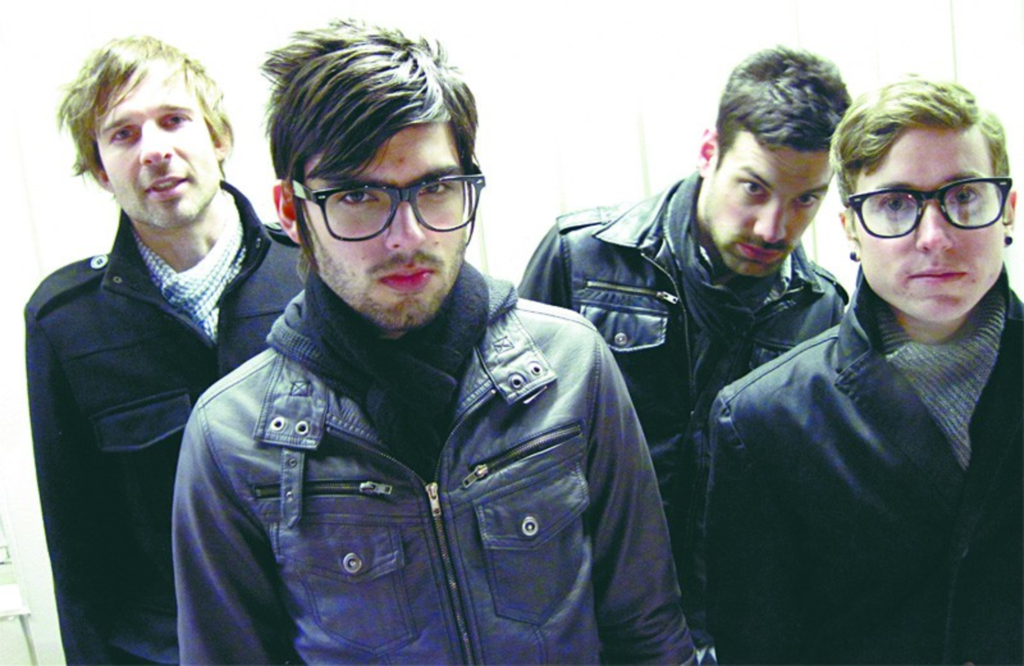 And when he’s onstage, singing his own lyrics and wailing on a guitar that’s patched through an array of pedals, the Thieves frontman is perfectly adept at channeling his cultural references into a cohesive musical statement.

But when it comes to ordering pub food, Hiser minces words.

“I might be playing it a little close to the vest, but I’m considering the chicken fingers,” says Hiser, vocalist and guitarist of the Kansas City indie-rock band Thieves, as he settles into a booth at the 75th Street Brewery.

So begins the debate about Hiser’s use of the phrase “close to the vest.” Sometimes heard as “close to the chest,” the saying is meant to express secrecy, as in concealing one’s cards while playing poker. When prodded, Hiser admits that he’s unsure of the exact meaning of the phrase, explaining that he was trying to convey his intention to order conservatively, without risk. Of course, his bandmates let it slide.

“I think it’s hilarious when people use expressions the wrong way,” says guitarist and keyboardist Salar Rajabnik. “Like, ‘I’m just going to go home and chill out — when in Rome.'”

Chet Kueffer knows the feeling, too. Once, while hosting a show on KJHK 90.7 in Lawrence, he made a reference to the film Waiting for Guffman, telling his audience that he was going to go home and “bite my pillow.” (The expression is a euphemism for gay sex.)

“I literally did not know what that meant, and I had the flu,” recalls Kueffer, who received an irate call from the station manager. “That was a humbling day.”

“There’s a certain friction between every member of this band because we can only really agree on a handful of bands that we like,” Hiser says. “The six songs on Divider were the only ones we were able to complete because they met everyone’s criteria.”

The result is six songs with six different moods, though the Thieves’ debut EP certainly favors the brooding and sedate side. Reflecting an influence of glitch and minimal-techno production, Divider, which the band released online for free, marries experimental alternative rock with disparate rhythms that evoke recent Britpop bands such as Doves and post-OK Computer Radiohead. Theoretically, all artists are thieves, and it certainly helps to borrow from iconic musical sources.

“A driving factor was trying to convey a mood that changes the way the room feels,” Hiser says.

Whichever mood that may be, rooms are filling up to experience it: Thieves sold out its EP-release show in November at RecordBar.

“It was pretty surreal peeking around the corner and seeing them [RecordBar staff] turning people away,” Rajabnik says. “It was a good night for us because it took a long time to get there.”

By most local-band standards, however, Thieves is ahead of the curve. It was only a year and a half ago that Rajabnik and Hiser started making music in a rented 10-by-15-foot space in an Olathe self-storage lot. This unlikely (and unheated) germinating ground was also home to Kansas City jam band MojoLotus as well as a couple of metal bands.

“It was like The Breakfast Club of local bands — a bunch of people who wouldn’t normally get along except in extraordinary circumstances,” Hiser says.

When the space’s management changed and the group began mysteriously losing power every time it rehearsed, Thieves relocated to the basement of drummer Wayne Zimmerman. Kueffer signed on as the group’s bassist after a chance meeting with Rajabnik at Best Buy.

“My dad brings him over like, ‘This guy is a musician,'” Kueffer recalls. “That’s any musician’s worst nightmare. I figured he was going to be into Tool and pro wrestling. But we started talking about music and we realized we had a similar U2 crush and three of the same basses.”

The Thieves team soon expanded to include manager Ryan Hetu, stage technician Jake Vaughan and lighting designer Nathan Giesecke. As a result, Thieves now strives to “give people a $50 show for $5,” according to Rajabnik.

Without the level of showmanship that the production team provides, Rajabnik says, Thieves would look like any other band. “We’ve encountered people that like our music and people that don’t, but we know that we work with intention and professionalism,” he says.

The band plans to take this confidence back into the studio this winter and spring to create its full-length debut album.

“We all have a desire for perfection, but at the same time we’re trying to find the face of the band,” Kueffer says. “Writing is like childbirth for us — it can be totally painful.”

But Rajabnik knows the payoff is well worth the effort: “There’s a lot of tearing and yelling and crying, but when you’re holding that beautiful baby boy, oh man, it’s great.”