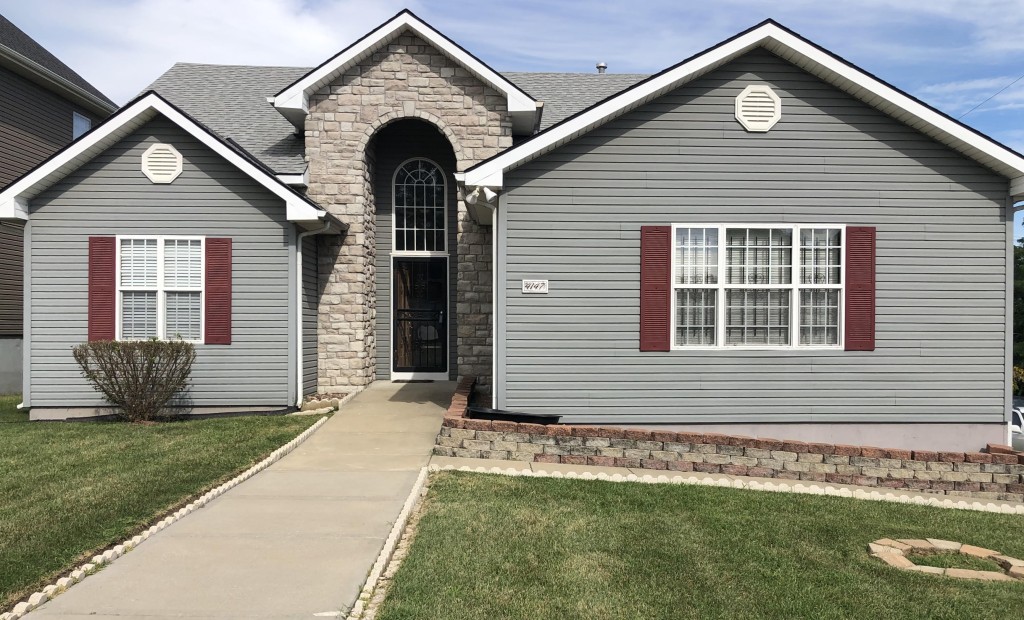 Current Oxford house in Kansas City, Missouri. // Courtesy of In the Name of GRACE

“I wasn’t a great kid. I drank too much, I smoked a lot of weed, and I didn’t work a lot. Even then, I was functional. But the first time I smoked meth, all I ever wanted to do was whatever I had to do to smoke more,” Rob Elsey says, paraphrasing his long-time friend who is recovering from addiction to methamphetamine.

According to the Missouri Department of Mental Health, as of 2020, 368,000 Missourians struggle with substance abuse disorder. Of the individuals admitted for treatment in 2020, 27% were using methamphetamine.

Following their daughter’s first treatment at a center in Texas, the Elseys sought out a transitional home in the KC area to promote her sustained sobriety.

“When you’re in recovery, being around people who understand your daily struggles is imperative,” Rob Elsey says.

In their search, the Elseys discovered the Oxford House.

“There are 10-20 entities that run different types of sober living throughout the state. What makes the Oxford House model unique is that there are no paid employees in each house,” Rob Elsey explains.

And while it may be difficult to envision a house of 6-12 residents who are recovering from addiction managing bills, this democratic agency, paired with the validation of shared experience, cultivates self-esteem, an essential and often lacking component of sustained recovery.

The Elseys quickly realized that there was only one Oxford House for women on the Missouri side, and it was located in a neighborhood that was frankly incompatible with their daughter’s recovery.

So they tried Kansas, and following their daughter’s relapse, they tried Omaha.

“We always had the best relationship with her when she was living in an Oxford House. She was always the strongest in her sobriety,” Rob Elsey says.

During their daughter’s move to Omaha, Rob Elsey noted that the nine-women Oxford House had been gutted and built back to allow for more residents. Rob Elsey has been in real-estate for 29 years at this point, and he wondered why Missouri was unable to accommodate Oxford Houses like this.

Rob Elsey posed this question to a woman working for Friends of Recovery Association, a partner to Kansas’ state-funded Oxford Houses. “Missouri needs houses, but they need outreach more,” she says.

So why was Missouri lacking outreach? Despite being the first state to embrace the Oxford House development in 1989–Kansas City initially received a state grant of $25,000 to bring experienced Oxford House residents to start the first two Missouri Oxford Houses–, Missouri decided to hire outreach workers in 1995 directly.

In 2015, David Hudnall, former reporter with The Pitch, uncovered the corruption due to Missouri’s defunding.

In essence, a man named Howard Robinson claimed the title of housing-services chairman for Oxford Houses in the Kansas City area and then effectively transformed a democratic recovery environment into an authoritarian regime.

Despite Robinson’s experience with addiction—he landed a position at the Oxford House following his graduation from a substance abuse treatment center in Swope called Imani House—his attitude toward others struggling with addiction was dehumanizing, to say the least.

“I always say that you could load up a van with a bunch of addicts, bus them into Universal Studios, and replace the real actors with addicts, and the studios wouldn’t lose a dime,” Robinson told Hudnall in 2015.

As Missouri continues to operate its Oxford Houses independently from Oxford House, Inc., it is critical that leadership a) humanize individuals who struggle with addiction and b) promote the self-governance that allows Oxford Houses to succeed.

“Addiction is an ugly disease that demonizes and criminalizes people and turns them into people they wouldn’t normally be, and we have to look beyond that. And that’s why we use the word ‘grace.’ We have to give these people grace and give them a chance to evolve into the people they can be,” Anissa Elsey says.

“If someone in their addiction does not want help, walk away, because you can’t help them. But if they want it, do they deserve it? Absolutely,” Rob Elsey adds. “I have friends who have been in recovery for 15+ years, and they tell me, ‘it’s one day at a time.'”

By fall of 2017, the Elseys hired Lance Whitney as an outreach coordinator. Whitney closed a few “sick” houses, relocated a few more, and then began opening new houses currently arranged in pockets throughout Platte County, Gladstone, and Raytown.

“Our daughter came to us while pregnant with her second child, Joey. At the time, she was houseless with her daughter, Mariah, who we’d never met. We got our daughter clean, anticipating that she’d relapse after she gave birth, and she did. But we claimed custody of Mariah and Joey,” says Rob Elsey.  “Not everyone is as fortunate as we are.”

Residents must maintain sobriety, pay for housing through active employment, and attend a 12-step self-help program. Alcoholics Anonymous and Narcotics Anonymous are the most prominent programs in the state, although the Elseys anticipate drug-assisted treatment to gain attraction.

The nonprofit is currently negotiating with Oxford House Inc. to fund the entire state of Missouri. This means Whitney will also erase his boundaries and integrate St. Louis, Columbia, St. Joe, and the Bootheel into his care. Expansion is crucial, as there are four times as many individuals in treatment centers as available beds at Oxford.

In the Name of GRACE is a unique situation. It’s the largest private outreach program in the country, and aside from a few small community grants, its growth has relied entirely on fundraising. 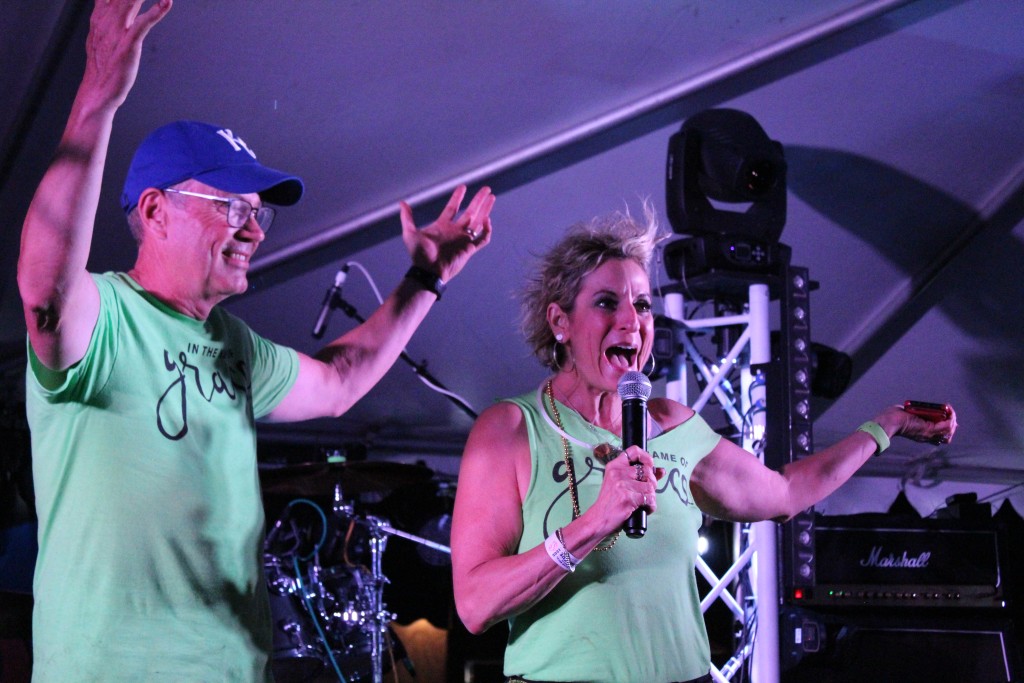 Rob and Anissa Elsey at their annual Your Royal Grace fundraiser. Courtesy of In the Name of GRACE

On Sept. 30, In the Name of GRACE will host its fourth annual fundraiser at The American Royal.  Your Royal GRACE is an ‘80s prom-themed night featuring the Elseys’ award-winning barbecue, the M-80’s performance, and an open bar.

Anissa Elsey addressed the paradox of an open bar at a fundraiser for sober-living head on: “We asked a few of our key residents at the Oxford Houses about serving alcohol. They told us, ‘Of course, we understand. You have to serve alcohol to raise money.’ In the past, we’ve had residents bartend. Although, more recently, we’ve decided this probably isn’t the best idea.”

Nonetheless, this paradox poses some interesting questions. The truth is that drugs permeate all facets of society, and while the Oxford House provides a buffer for individuals who struggle with substance abuse disorder, does their true recovery require reintegration into a world that frankly does not accommodate to their needs? And how can we collectively strengthen relationships within ourselves, with others, and with the substances the prove to be problematic for so many?

Single and couple tickets for Your Royal GRACE are available online.