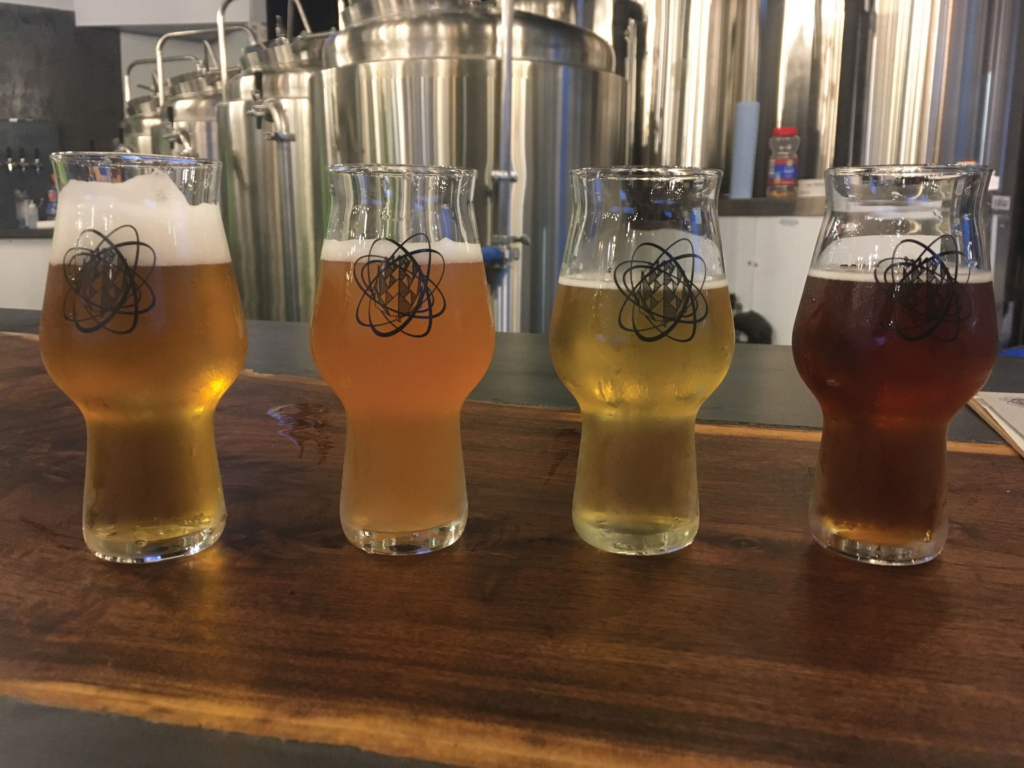 Kansas City’s had an explosion of craft breweries over the past few years, and if the number of openings slated for the rest of 2018 is any indication, we still haven’t reached Peak Beer.

But let’s be honest: not every new brewery is gonna be a revelation. And as the craft beer boom spreads further out of the city and into the ‘burbs (and beyond), checking them all off your list can become a logistical and financial headache.

Completionists, take heart: I have done the grueling work of visiting three of KC’s newest suburban breweries — in North Kansas City, Lee’s Summit, and Blue Springs — to help guide your visits. Here’s the beer (or beers) to order at each while you stamp your brewery passport. 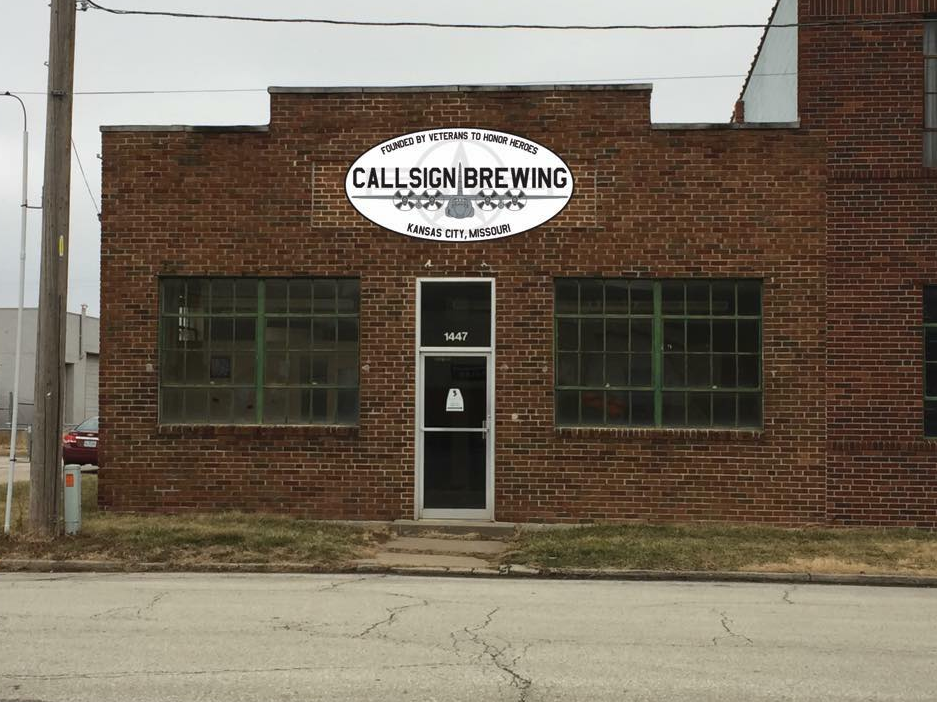 North Kansas City doesn’t exactly have a dearth of craft breweries. But Callsign Brewing, a two-month old brewery and taproom, is filling a no-frills niche on the city’s more industrial east side. Owner and Air Force vet Steve Sirois brews sturdy beers for sturdy livers: the two most popular picks here, the Blonde Bombshell and the Bomber Brown, clock in at 6.5 and 5.9 percent ABV, respectively. The whole operation seems allergic to craft brew snobbery. This isn’t the place for wild yeast and frivolous fruits; you get the feeling that anyone caught fussing over “lacing” and “mouthfeel” will be asked to do push-ups in the parking lot.

The best beer by a landslide is the Bomber Brown. This is an easy-drinking, American-style brown ale that’s not tipped too far in any direction. Sirois’s brown marries a smooth, dependable maltiness with enough bitterness to keep it interesting. You can imagine drinking a few of these without getting bored — and at $5 a pint, that’s not hard to do.

Callsign’s taproom is a pleasant enough place to drink them. The building used to house a tire-patch factory, and tall ceilings with arched wooden rafters give the space the look and feel of an airplane hangar. The décor is subtly military-themed — flight paddles shaped like airplane propellers, a chalkboard wall that supports the troops — but nothing’s overly jingoistic. To date, I have seen zero velvet paintings of flag-draped bald eagles shredding electric guitars with their Freedom Talons. Plus, there’s snacks. So put on some khakis, grab a suitcase of cheese balls, and go to town on a sensible brown. 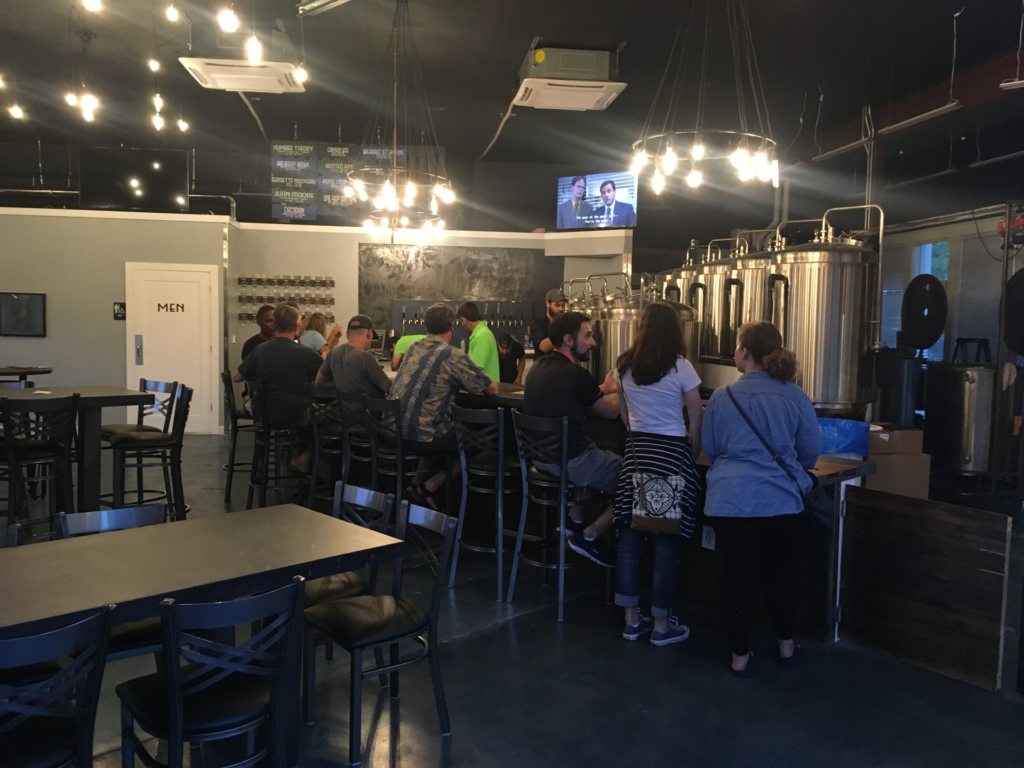 If Callsign had an antithesis, it might be New Axiom Brewing Co. The Lee’s Summit brewery is a playground of bold flavors and risky experiments. And although the brewery has only been open for a month, the tap list is already long enough to indulge the imaginations of each of its three brewers: Mac Lamken, Devin Glaser, and Sean Householder.

New Axiom’s one of my favorite breweries to open this year, but a disclosure’s in order: these are assertive brews, and some of the flavors are polarizing. A flight or a short pour is an ideal way to test your palate for the Crimson Bog (a cranberry sour with strong notes of cereal and vanilla) or the Rooted Rye (a brick-colored ale that blends the sharp herbal bite of root beer with the spicy-sour tang of rye).

The best pick for a full pint is the “Anyways. Haze.” New England-style IPAs are having a bit of a moment right now, which is good news for people with taste buds. (My elevator pitch: NE IPAs are the first 10 seconds of a stick of Juicy Fruit.) New Axiom’s version is true to style, with a hazy golden color and a soft, round sweetness. It’s also packed with fruit flavor: if you’ve ever wanted to dry-hop a bucket of Trolli Peachie O’s, this is the beer for you.

If IPAs aren’t your speed, try the Grisette Nouveau, a crisp table saison (think: lower ABV) with a dry, effervescent finish and a slight earthiness from the rooibos tea. There’s not much funk on this bad boy, but there’s enough for Lee’s Summit.

New Axiom’s taproom is sleek but cavernous, tucked inside a corporate-feeling strip off Highway 291. It’s also both dog and kid-friendly — in nice weather, you can lounge on a large outdoor patio and drink in the crisp sea? air from one of the city’s luxurious manmade ponds. 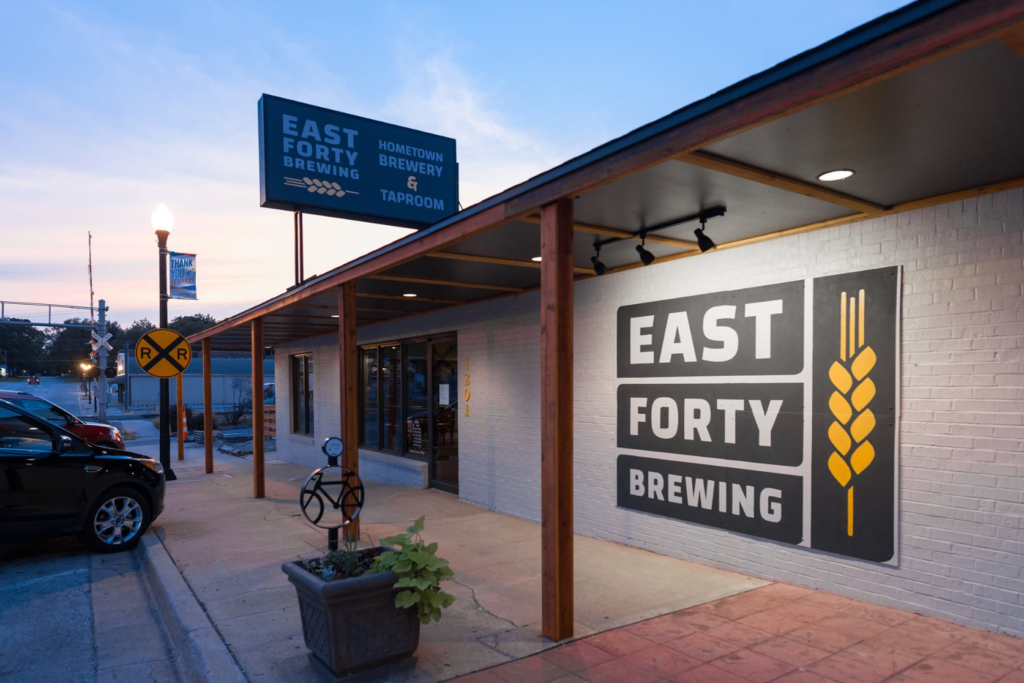 City dwellers, I hear your whining from here: Blue Springs is so faaaaaaaar. Well — I’ve got both good news and bad news for you. The good: East Forty Brewing Co., a three-month-old brewery in the cute core of Blue Springs, has the kind of ambience that will make you want to stay a while. The bad: it’s gonna be an expensive Lyft.

East Forty has a cozy, lived-in vibe (lots of barnwood and live-edge tables), and locals are already camping out here for solid pizzas, soft pretzels, and beers with more IBUs than Lucille Bluth. Hops are the bumper rails on the bowling alley lane of brewer and founder David Mann’s brews.

If you like pale ales, you’re in luck. The brewery’s flagship pale, Quarter Quarter, has a clean, fresh finish and a flirty, guava-adjacent nose. Tropical hops give the beer a little heft without punishing your palate. But my pick — both for audacity and execution — is the Calm Me, Maybee, an American IPA fragrant with honey and lavender. There’s no way around it: this beer, uh, tastes like weed. But the honey and lavender soar over the top, blunting the hops’ jagged edges with a cuddly, cloudlike softness.

IPA skeptics along for the ride might enjoy the Second Breakfast, a full-bodied porter that tastes like an Oreo McFlurry, or the Blackberry Dog Days Summer Wheat, a thin-bodied but easy-sipping brew voted Most Likely to be an Alcoholic Seltzer at its high school graduation. Beer skeptics might enjoy the atmosphere, too: East Forty offers ciders, wine, and cocktails on top of its taps.