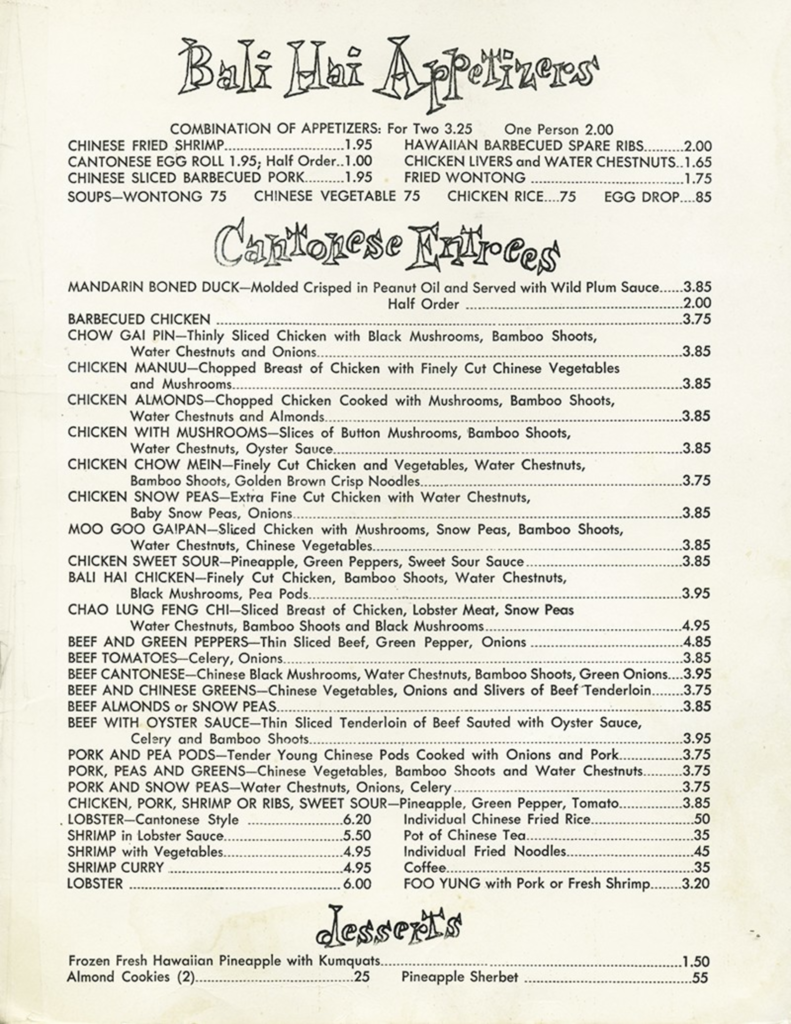 A friend of mine gave me a gift last month: a vintage menu from the mostly forgotten Bali Hai dining room, a popular Cantonese restaurant on the lower level of Bretton’s Restaurant at 1215 Baltimore — don’t look for it, the building was torn down years ago. Bretton’s Restaurant was a landmark local dining venue from 1945 to 1976, serving both traditional Jewish dishes and classic continental entrees like beef Wellington and baked Alaska. The owner, a former rabbi named Max Bretton, opened the Bali Hai room in 1954, five years after the musical South Pacific opened on Broadway and made the song, “Bali Hai,” a big pop hit.

The Bali Hai menu presented to me probably dates from 1960. The prices are very cheap (almost all of the entrees are less than $5; lobster is $6), and although most of these dishes are inspired by Cantonese cuisine, there are nods — like Hawaiian spare ribs and fresh pineapple — to the more tropical “Polynesian” cuisine (influenced by the French, the Fijian and the Hawaiian) that was becoming so popular in the 1950s, when Trader Vic’s and the Luau were two of the most popular restaurants in Los Angeles. It didn’t take long for the trend to move to the Midwest.

Part of the Eisenhower era allure of the (mostly) sweet Polynesian culinary creations were the sugary but potent cocktails that were served along with them. The Bali Room offered Caribbean Punch, the Voo Doo, the Atomic Bomb, the Tropical Splendor, the Hurricane and the Shipwreck.

“Young people loved the Bali Hai,” Ray Starzmann says. He was a waiter upstairs at the more formal Bretton’s Restaurant from 1966 until it closed in 1976. “It was dark and intimate and like going downstairs to a secret club. And, of course, people got very, very drunk.”

More Polynesian restaurants and nightclubs followed: the Castaways at 4331 Main and, about 10 blocks to the north, a dark saloon with bamboo poles and tiki statues called the Kon Tiki (it later became a gay bar and served fried-chicken dinners on Sundays). Later — but also on Main Street — was the Kona Kai restaurant in the old Hilton Inn, which served Polynesian cocktails and cuisine for more than three decades until Polynesian cuisine, such as it was, became passe in the 1990s. (Even the iconic Trader Vic’s in the Westin Crown Center Hotel had vanished by 1996.)

There are still Polynesian-style cocktails (a lot of them, actually) served at the Princess Garden at 8906 Wornall — and a couple of vaguely Polynesian dishes, too. There’s nothing on the dinner menu for $3.85, but this isn’t 1960 anymore.

And where can you still find a Pu Pu Platter today?