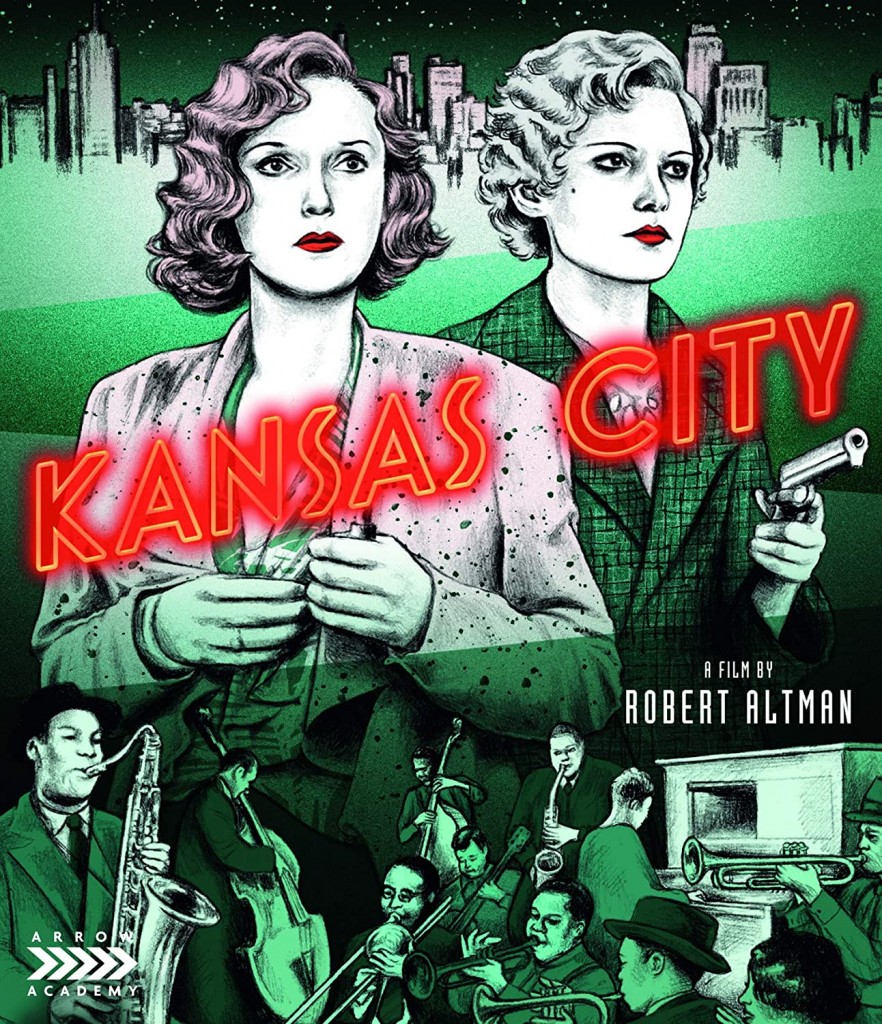 Prior to watching Kansas City (1996), I had seen maybe, like, two Robert Altman movies in my life, and those when I was too young to really understand the difference between them and any other movies. Probably not the best way to establish my bona fides at the head a review, but here we are.

When I got the Arrow Academy Blu-ray of Kansas City for review, I figured it was high time to correct that deficiency. And what better place to start than with a movie that’s set in—not to mention named after—the metro where I live, which was also Altman’s hometown?

A few years ago, I wrote a story for Jazz Age Cthulhu that was set in Kansas City in the ‘20s, when it was still known as the “Paris of the Plains.” That’s not quite when Altman’s Kansas City is set, but it’s closer to then than it is to now.

Made just a decade before Altman’s death at age 81, Kansas City revisits the KC of his youth in the ‘30s. Specifically, it’s set in 1934, during the reign of “Boss” Tom Pendergast and in the midst of an election year so violent that it became known as the “Bloody Election.”

We see Pendergast’s thugs rounding people up to vote “as many times as I tell you to,” as Steve Buscemi’s Johnny Flynn informs them. We also see them execute a man who tries to object to the fact that they are hauling truckloads of voters in from other districts.

“Democrats do that?” Miranda Richardson’s laudanum-addicted Carolyn Stilton, wife of a prominent local politician and advisor to President Roosevelt, asks incredulously—just one of the many times the movie showcases the disconnect between appearances and reality in Kansas City under the “Pendergast machine.”

The plot, which follows a number of parallel storylines, involves Blondie (Jennifer Jason Leigh), a desperate woman whose husband Johnny (Dermot Mulroney) has robbed a visiting gambler while in blackface and found himself in the clutches of Seldom Seen (Harry Belafonte, having a blast), the owner of the Hey-Hey Club in Kansas City’s famous 18th Street jazz district.

In an attempt to secure her husband’s freedom, Blondie kidnaps Carolyn Stilton at gunpoint, demanding that her politician husband (Michael Murphy) use his connections to get Seldom Seen to release Johnny safely.

As Blondie and Carolyn travel around the city during the course of one night and day, encountering the other characters and bonding, Seldom Seen holds Johnny prisoner, Henry Stilton puts the political machinery of Kansas City into ponderous motion, and we see large-scale voting fraud underway in broad daylight.

For KC residents like myself, part of the joy of watching Kansas City is spotting landmarks, with the prominently-featured Union Station being the most obvious. (The film is set the year after the Union Station Massacre, a fact that the characters bring up.)

Not many movies are set in Kansas or Missouri; fewer still are shot here. Yet, Altman’s film makes use of a number of familiar buildings and streets, even while it transforms them into the Kansas City of the Jazz Age, rather than the one of today.

Kansas City during the Depression was built on jazz, and so is Robert Altman’s Kansas City. The band at the Hey-Hey Club, composed of a who’s-who of contemporary jazz musicians, provide the score to the film, which is also broken up by extended interludes of the band jamming all through the night and into the morning.

“I tried to write this film like jazz,” Altman said in the movie’s production notes, “and I tried to shoot it that way.” The new musicians perform the classic music of figures like Count Basie, Mary Lou Williams, and Duke Ellington, including a recreation of a “cutting contest” between Coleman Hawkins and Lester Young (Craig Handy and Joshua Redman), witnessed by a 14-year-old Charlie Parker, played by Albert J. Burnes.

“Cutting contests” were something of a Kansas City specialty and, according to those same production notes, “No city engaged in these sessions with such enthusiasm and competitive spirit.” In fact, so much footage was shot of the various performers engaged in their “genuinely joyful” music that Altman also released a documentary the same year, Jazz ‘34: Remembrances of Kansas City Swing, narrated by Harry Belafonte himself.

Ostensibly a tragicomic gangster film in what we would now think of as the Coen Brothers vein, the jazz music that is the lifeblood of the picture keeps things from feeling too tragic, and as the credits roll over a rendition of the Duke Ellington classic “Solitude,” which is said to have been Altman’s favorite song, we see Charlie Parker sleeping in the balcony, bringing us home.