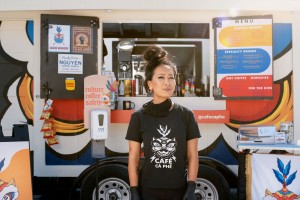 Enough is enough. Kansas Citians gathered outside of Cafe Cà Phê to pray for the eight Atlanta shooting victims and stand in solidarity against anti-Asian crimes Sunday.

Jackie Nguyen, the owner of Cafe Cà Phê, says she is tired of feeling like “the other”.

Growing up, Nguyen wished she could be white. She would bring rice and grilled pork splashed with fish sauce for lunch but her peers would make fun of her for bringing “dog” or “rotten fish” to eat.

Nguyen had gone so far as to stop speaking Vietnamese to prove she was born in the U.S. Now, she has brought more visibility to Asian culture by opening Kansas City’s first Vietnamese coffee shop.

Racism against Asian Americans has risen during the COVID-19 pandemic after former President Trump did not take advice from the World Health Organization to refrain from terms like “Wuhan virus”.

Trump even used an anti-Chinese slur during his interview this evening on Fox, just before news trickled out of a mass shooting in the Atlanta area that apparently targeted Asians and left 8 people dead pic.twitter.com/UY56F9WWxY

Mari Matsumoto, 33, of Leawood, says she was spat on at a store and told to go back to her own country on Friday. She says the harassment was present in her life before the pandemic and was in the crowd to mourn the victims of the Atlanta-area mass shooting of mostly Asian women.

It is time to stand up for what is right. Anti-racism resources to support the AAPI community can be found here.