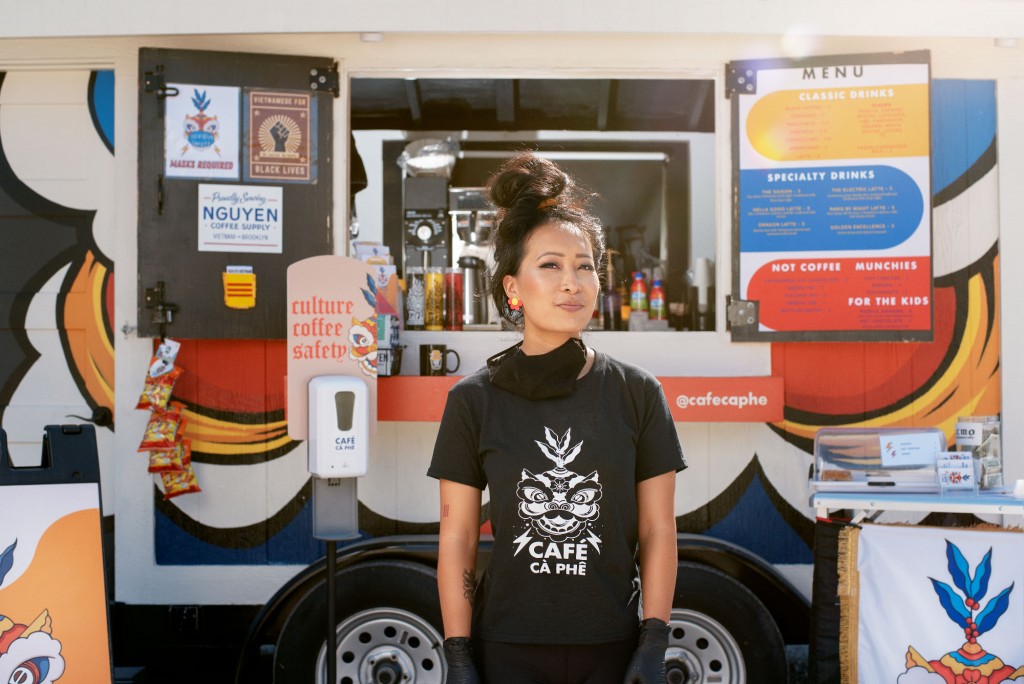 The day all of us spooky season fanatics have been waiting for is arriving this Saturday, Oct. 31. No, not Halloween  (insert side-eye emoji here). Kansas City is finally being forced to acknowledge the city’s lack of Vietnamese coffee! But fear not, Cafe Cà Phê, KC’s very first Vietnamese mobile coffee shop, is making its grand debut this weekend. With cà phê meaning “coffee” in English, the business, founded by Jackie Nguyen, is bringing the joy of this “coffee coffee” to the community.

Nguyen, a first-generation Vietnamese American and daughter of a refugee, grew up in San Diego, CA. She lived in New York for a decade working as a Broadway actor. She also worked as a barista for eight years. A trip to Vietnam last year inspired her to make a career change into entrepreneurship and bringing the coffee from her roots to the U.S. felt like the perfect move. She visited Kansas City for the first time last December while touring with the Broadway revival production of Miss Saigon. Nguyen soon fell in love with the city and recognized the potential the location could mean for her future business.

“It was such an up and coming with everything else that is developing right now,” Nguyen says. “While I was trying to pivot my career, I was trying to look at different areas of the country that weren’t saturated with Asian cuisine, or Vietnamese cuisine, and also a place where I can have better affordability and be able to have a better standard of living versus New York and LA. Kansas City just seemed like a perfect middle ground, literally in the middle. A place that not only needed a coffee shop like this but the culture also. That’s why I decided the Midwest was a perfect place to start with, trying to bring more visibility to the Asian culture and cuisine.” 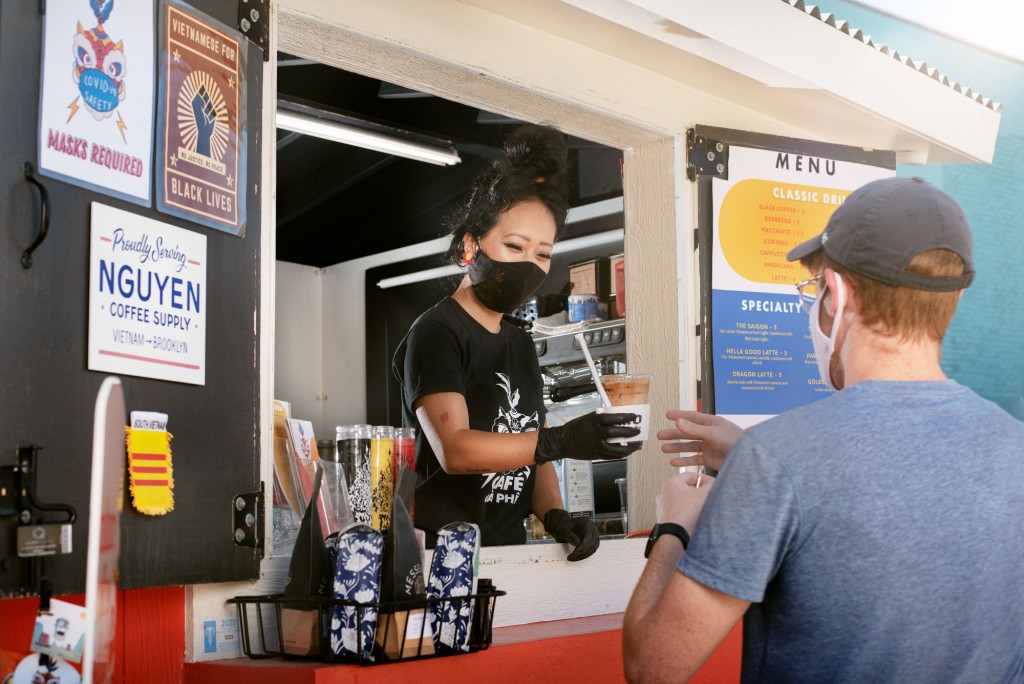 After deciding on KC, Nguyen started coming to terms with what the transition from actor to business owner would look like. Though she was initially intimidated by the logistics behind owning an LLC, she quickly realized there were elements from her Broadway career that prepared her for the process.

“In a way, acting has really lent itself to this business, because I’ve been able to be really malleable, and I’ve been able to have thick skin. When it came to getting rejections from banks and lending, it was like nothing, it didn’t feel like a rejection at all. I was like, “Okay, well, I’ll just move on to the next one,” and as different as it seems, it’s actually really benefited me and helped me. The skill sets that I need as far as owning a business—leadership, creativity, being able to balance many things happening at once, and when things go wrong, you have to kind of problem solve—all of those things I’ve learned from being an actor. Things can go wrong on stage and really quickly, you figure out what to do on the fly, while hundreds of thousands of people are watching.”

Up until March, Nguyen was set on the idea of starting her coffee shop in a brick and mortar, but the sudden presence of a global pandemic forced her to reconsider her options. Banks were focused on giving PPP loans to small businesses to save restaurants, and spaces were hesitant to take a chance on new restaurants. Nguyen was also unsure when people would feel comfortable returning to physical spaces outside of their homes. She was initially opposed to the idea of a food truck, but she came to realize the money it would allow her to save and how she could customize a mobile space that still captured her original vision. Nguyen has since come to embrace her “mini brick and mortar,” and is taking advantage of what being on wheels will allow her to do for the community.

Nguyen plans to partner with different Asian businesses through the KC metro area in hopes of bringing attention to what their food and services have to offer. “I know so many of them are mom and pop, they’re just wanting to survive. They’re not really trying to be part of [this] movement, you know what I mean? But I think if I could help and be like, let me do all the work, you just show up partner with me, that’s what I’m hoping to do,” she says. 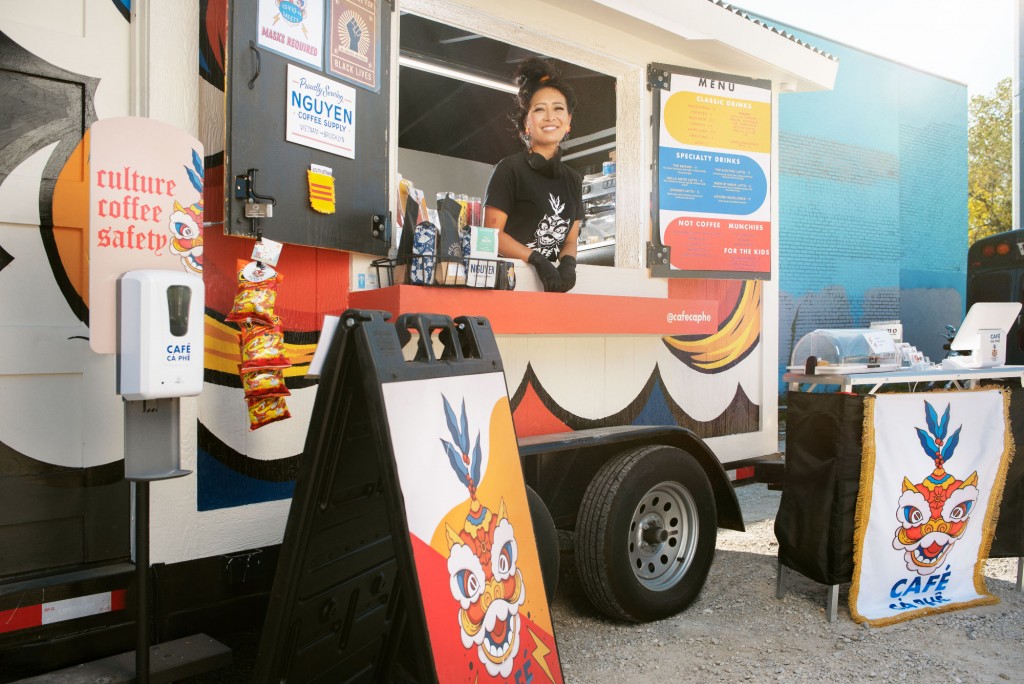 Though Cafe Cà Phê is yet to officially open, Nguyen has done a handful of pop-ups over the last month to get feedback on her menu and introduce her business to the community. Last month, Cafe Cà Phê teamed up with Mr. D’s Donuts, a donut shop run by a Mongolian and Taiwanese couple in Shawnee. She has also partnered with Virgils Plant Shop, Peaches Vintage Co., Inner Space, and Seven Swans Creperie, with masks and social distance always required.

Nguyen has also been very active through Cafe Cà Phê’s social media, keeping followers updated on what the business is doing and where to find surprise pop-ups. After partnering with Sassy Nails in Westport, a Vietnamese owned and operated nail salon, Nguyen shared a candid conversation via Instagram story regarding her personal experience with the role Vietnamese nail salons have played in her life. She also educated viewers on the misinformed view Americans often attach to the service. Nguyen’s ability to be open with followers has shown the care she has for her culture and business, and well as the honesty and passion she hopes to bring to the community.

Nguyen has branded her mobile coffee shop to a level of *chefs kiss* perfection in preparation for opening weekend. With a distinct dragon logo, fans will never fail to attach to Cafe Cà Phê after seeing it, merch includes stickers, pins, totes, candles, and MASKS in anticipation of the big day. She also has plans to release a phin—a Vietnamese coffee brewing tool.

The businesses’ Instagram and Facebook have teased several drinks that will be offered on the menu—lychee apple cider, pumpkin sesame hot chocolate, ube oat milk Vietnamese coffee, need I go on?

Nguyen anticipates the number of Vietnamese coffee virgins she will encounter with the opening of Cafe Cà Phê, saying “I know a lot of people are gonna be like, ‘What is Vietnamese iced coffee?”’ She is ready to answer questions and provide the KC community the opportunity to try something new.

Want to learn how to make your own Vietnamese coffee? Learn from the specialist herself here.