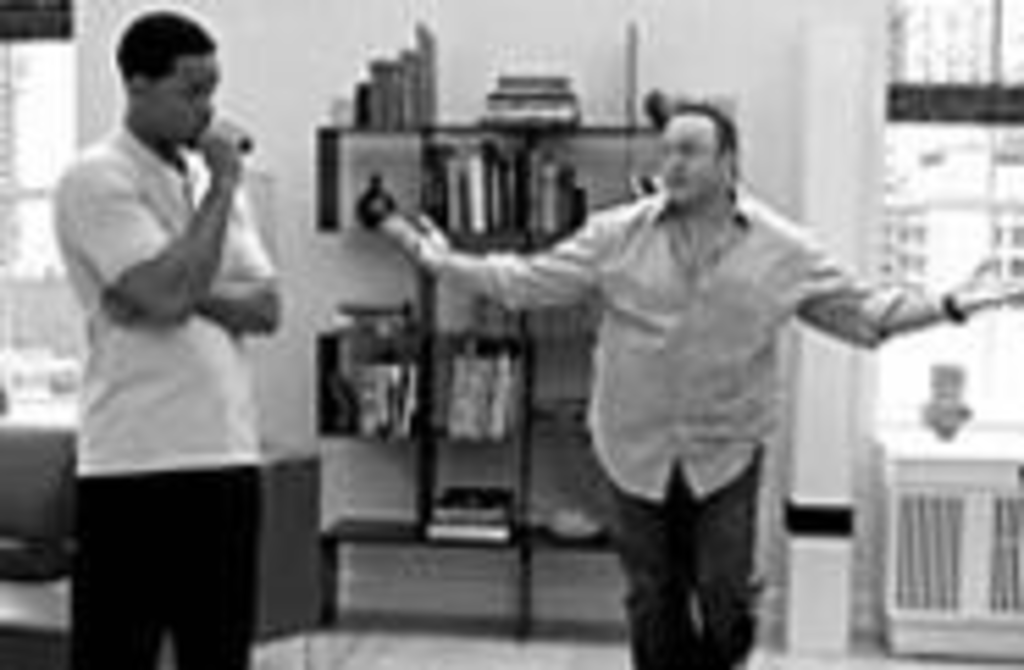 One should expect little from the man who has directed an Olsen twins movie (It Takes Two, the one with Steve Guttenberg); Matthew Perry’s first Friends-to-film entry (Fools Rush In, its title an apparent nod to its audience); and Sweet Home Alabama, one of those interchangeable romantic comedies located at the bottom of Reese Witherspoon’s barrel. Andy Tennant is a director whose name audiences will never know. He works even when his movies don’t — which is most of the time, because he stays out of his stars’ way, offering nothing in the way of visual style, verbal wit or, apparently, direction.

His latest job was to sit on the set of Hitch while Will Smith acted like Will Smith, or at least what we imagine he acts like when cameras aren’t rolling. Calling his work here a performance would stretch the definition; Smith could as easily have been sitting on a couch next to Jay Leno or ordering a deli platter. As Alex “Hitch” Hitchens, a “date doctor” who teaches schlumpy young men how to woo women out of their league, Smith is the stale prince of charming grins and adorable asides. It’s astounding that this is his first real romantic comedy — it feels like he’s been doing this shtick for years. It doesn’t help that he is forced to deliver dialogue like “Life is not about the breaths you take, but about the moments that take your breath away.” This bolsters the theory that screenplays have become merely the cobbled-together results of Google searches for hackneyed aphorisms. This particular search was conducted by Kevin Bisch.

Hitch is meant to be a cynic who believes in romance only for other people — in this case, nebbishy accountant Albert, played by inexplicable TV star Kevin James (King of Queens), resembling a swollen Jeremy Piven. Albert’s got the hots for heiress and allergy medicine Allegra Cole (Cameron Diaz look-alike Amber Valletta) because she’s stunning. Albert hires Hitch to provide pointers on how to score some Allegra, but that romance is pushed to the sidelines for such long stretches that you’d be forgiven for forgetting they’re even in the movie.

What Hitch is more interested in, without actually showing much interest, is the burgeoning love affair between Hitch and Sara (Eva Mendes), a gossip reporter for a New York City tabloid. Both characters have supposedly been damaged by traumas experienced long ago, Hitch by a college love affair that ended badly (seen briefly in flashback, with Smith dolled up like Steve Urkel), Sara by a younger sister’s brush with death when they were children. Precisely how these moments left these two beautiful people so ugly inside is left to the imagination. (Would that the makers of the movie had half of one.) Needless to say, they flirt, go on a couple of dates and fall in love, only to experience one of those unfortunate misunderstandings that people in movies have when they fail to ask a single question whose answer could explain everything.

Buried somewhere in here, about 6 feet deep, is an intriguing premise: Hitch fixes up other people because he’s broken, a hopeless romantic who claims he doesn’t believe in romance. Late in the movie, when his world is torn asunder by Sara’s vengeful front-page piece outing him as a maker of one-night stands and a breaker of hearts, Smith flashes a touch of the talent that made him so remarkable in Six Degrees of Separation and Ali. He lashes out at Albert, who believes in a thing called love, by claiming it doesn’t really exist, that its fleeting pleasures lead only to lasting pain. But Hitch and Hitch obviously don’t believe that; perpetrators of fluffy fictions have no interest in harsher truths, especially when the audience has come to see people have “their last first kiss,” as Hitch likes to say when selling his services. You don’t sell tickets to a date movie by telling the audience they’re kidding themselves, even when the makers of the movie clearly are.