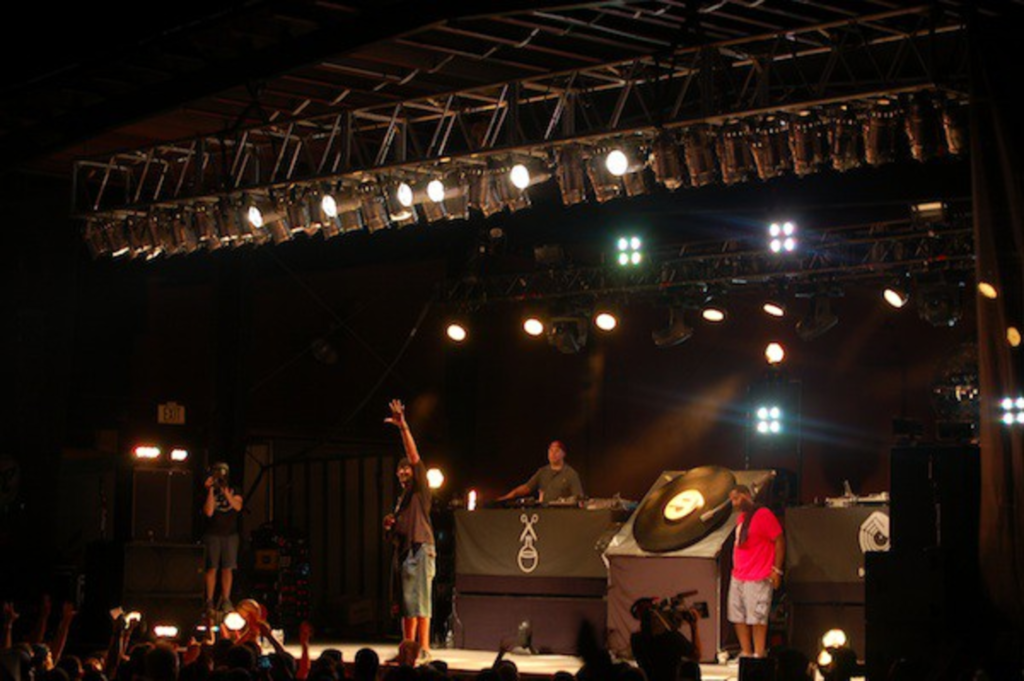 Jurassic 5, 20-year veteran group of the hip-hop world, brought its signature rhymes and beats to Crossroads KC last night, much to the delight of a packed venue. Audience members had surely been anticipating this show; the last time J5 performed together was in 2007.

J5’s set kicked off in a frenzy, flowing from one song to the next with fleeting space in between. Containing staples like “After School Special” and “I Am Somebody,” it was obvious that the group was still as much on point as it was in the glory days of the early aughts. When baritone MC Chali 2Na took a break to introduce the band in full, the crowd cheered for each of the original six members.

After the warm welcome, the mood shifted into the comfortable favorite “Quality Control.” 2na’s many shout-outs to KC emanated from the stage, engaging the fans and encouraging heads to bob throughout. As the band transitioned into “Concrete Schoolyard,” Ike Turner’s sampled piano notes put smiles on the faces of everyone listening. This was probably the most nostalgic track of the night, with the memorable hook taking everyone back to the first self-titled J5 EP.

2na had a solid solo on “Comin’ Thru,” a track from his 2009 solo album, Fish Outta Water. The big man handled the spotlight with aplomb and was backed up by DJ’s Numark and Cut Chemist. A sample from Three Dog Night’s “One” provided the groundwork for “Future Sound,” bringing MC’s Akil and Zakir into the spotlight. 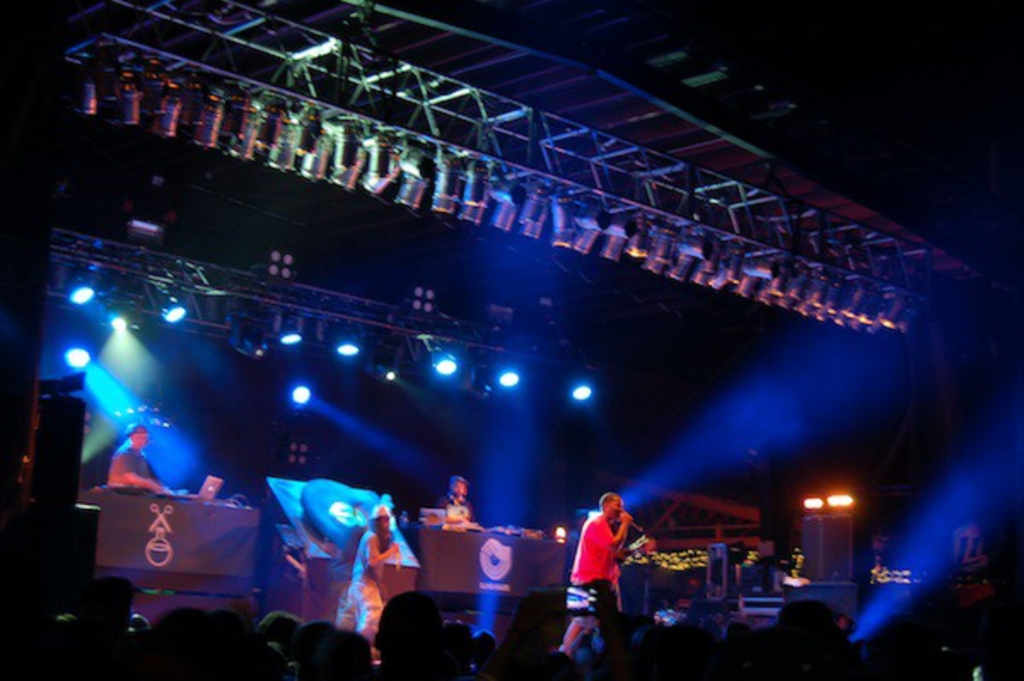 “Hey,” the one slow jam of the night, was a welcome change of pace, settling into more of a synth-heavy 1990s R&B vibe. The crowd relaxed into this song, and the throwback soul vibe continued with “Baby Please” and “Gotta Understand,” tracks driven by Al Green and Curtis Mayfield samples. The latter definitely showcased J5’s cohesiveness from a vocal standpoint, featuring tastefully harmonized parts from all of the MCs.

Akil had a quick call-and-response with the audience leading into “Freedom,” causing hands to rise up into the cool night air. “Thin Line” followed, resulting in the only part of the evening where the sound was less than ideal. The subtlety on this one was lost when the bass overpowered a large part of it. Despite the MC’s best efforts to replicate Nelly Furtado’s guest vocal from the studio cut, the live version was a bit muddy. Another shout-out from 2na to Kansas City (actually specifying Missouri) yielded a quick breather before the upbeat “Countdown” and “In the House.” That one, with its Rapper’s Delight-esque bass groove, took us into a dance-party vibe. All six cohorts came out front for a few choreographed dance moves before ending the set in a scratch-filled flurry of feedback, courtesy of the DJs. 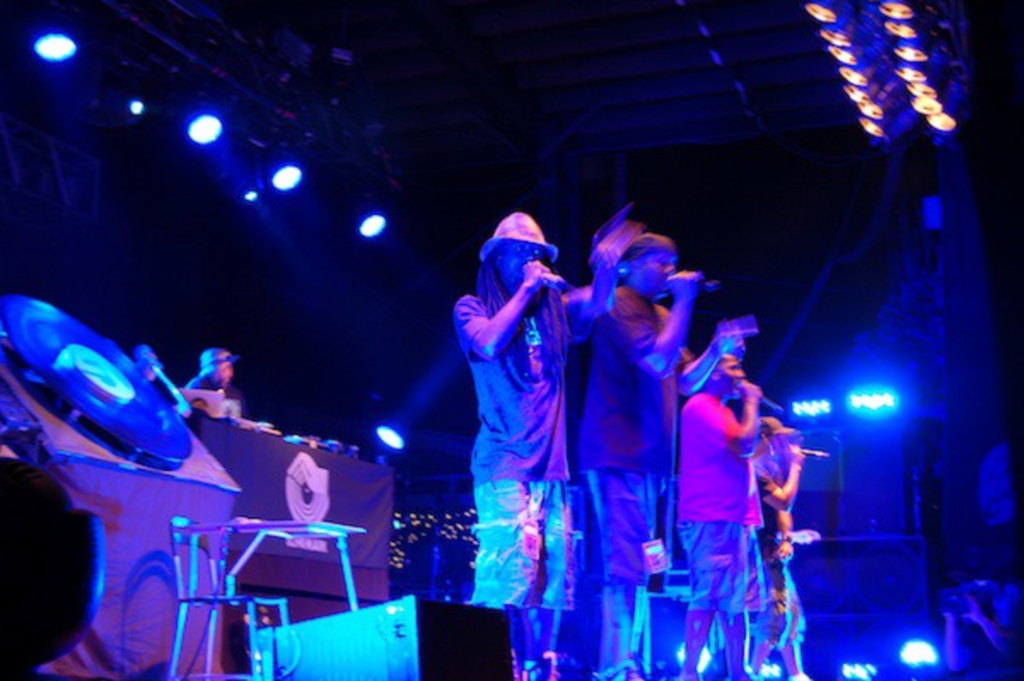 As encores go, this one was pretty lengthy. Chali 2na petitioned the audience for suggestions, but he had one requirement: It had to be something that the band wouldn’t normally play. The result was a short excerpt from Quality Control’s “Game,” then an immediate shift into J5’s new single, “The Way We Do It.” The latter track probably had the most pop feel of the evening, certainly due to a White Stripes “Doorbell” sample. The MCs showed their sense of humor, quoting a few lines of Nelly’s “Hot in Herre” before Numark and Cut Chemist kicked off a funky R&B groove, using a Dap-Kings riff for the driving cut “Red Hot.”

“A Day at the Races” was a surprising late-show feature, with a revved up-tempo and some impressively fast rhyming. MCs Zakir and 2na both exhibited superior dexterity in enunciation, but Mark7 outdid each of them.

The encore set ended somewhat predictably with “What’s Golden,” although it seems fitting that one of the best-known tracks should end a reunion show. Jurassic 5’s hiatus was long and left alternative hip-hop fans with an aching musical void; hopefully, this tour is a sign that these hip-hop originators are back in the game.