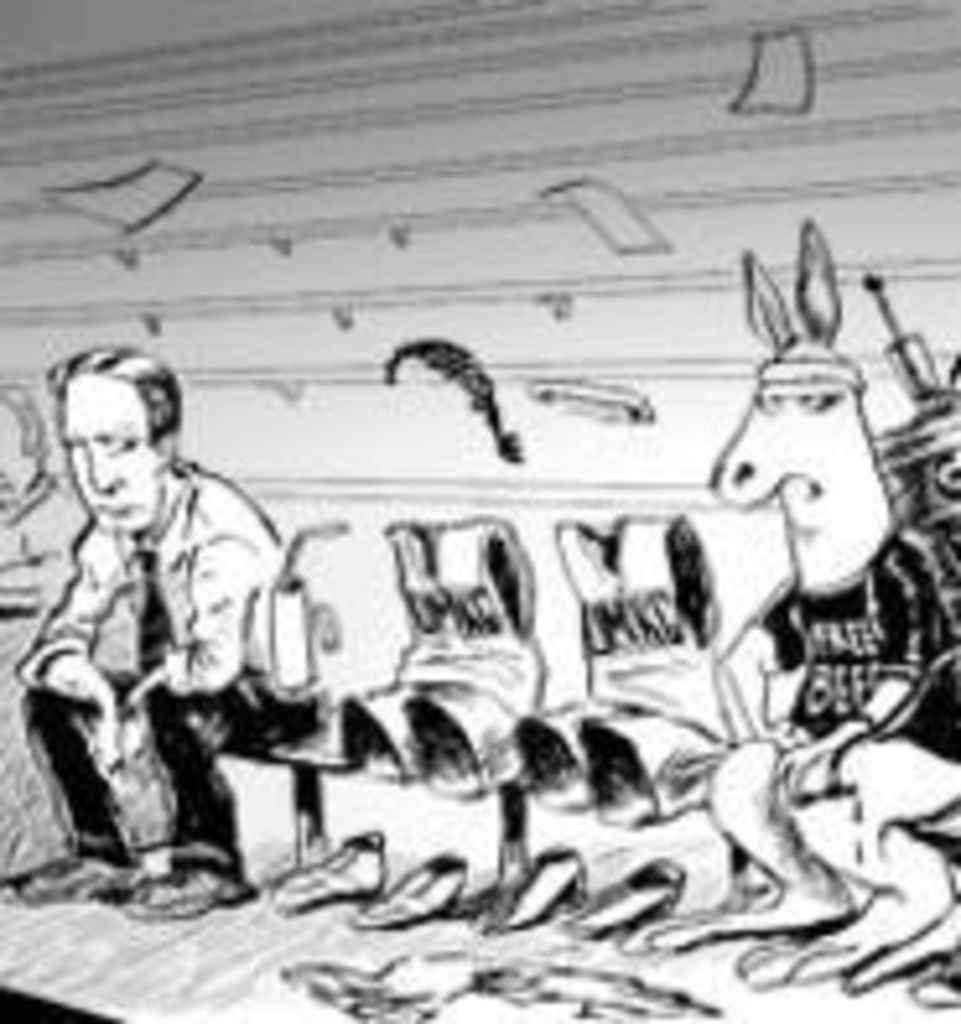 An arctic wind howled through Kansas City the night of January 25. Temperatures plummeted, as did any hope that the UMKC men’s basketball team could revive its pitiful season.

The season wasn’t turning out like Watson envisioned when we spoke before this season’s opener (“He’s a Ball,” November 28, 2002 ). Last year, UMKC won a record eighteen games. “This team has more talent than last year’s team,” Watson said. “We expect great things this year.”

But Watson and his teammates were hurtling toward the worst season in UMKC’s 33-year basketball history.

“If we ever do get it together, watch out,” Watson said, like a young man with only wishful thoughts.

Than an odd thing happened. The team started getting it together.

First was a surprising victory on the road at Western Illinois. The team was giddy going into its game against conference demigod Valparaiso the next night. For six of the past seven years, Valpo has won the Mid-Con postseason tournament, capturing the automatic NCAA Tournament bid that goes with it. “If we win at Valpo, I’m buying everybody who comes to my radio show a Budweiser,” declared Rich Zvosec, the ‘Roos’ second-year head coach.

The ‘Roos stole a 71-68 overtime victory in Valpo’s sold-out arena.

Four ‘Roos fans showed up the following Tuesday to take Zvosec up on his offer. Though the team claimed one of the most impressive road wins in UMKC history, The Kansas City Star ran the game story far inside its Sunday sports section.

“I just want Kansas City to know that we’re a good team,” says Carlton Aaron, the club’s 6-foot-9-inch sophomore center. “And that we’re coming together.”

To say Aaron was a dog on the court earlier this season would be cruelty toward man’s best friend. After the former Temple player sat out last season because of NCAA regulations on D-1 transfers, Aaron showed up for fall workouts weighing 350 pounds. He’s down to 290, but he’s still too heavy to maintain the kind of pace that UMKC needs from him. He played 24 minutes in the ‘Roos’ 91-69 blowout over Southern Utah on February 6, recording a double-double with 21 points and 10 boards. When Zvosec asked him to go 35 minutes in the next game, against lowly Chicago State, Aaron registered a respectable 13 points and 9 boards but was visibly gassed.

“He can be the best dominant big man in the conference if he keeps working at it,” Watson says of his teammate.

Aaron doesn’t disagree. “I’m just now getting my game together,” he says.

The same could be said for all the ‘Roos — including Zvosec. After stubbornly sticking to the complicated matchup-zone defense for the first three months of the season, Zvosec has relented and allowed his team to play more man-to-man defense the past four games.

The matchup zone was shrapnel from the Dean Demopoulos implosion. “The first half of the season, we’d make fun of the matchup zone. It’s retarded,” says Andy Hoffman, a UMKC senior from Cedar Falls, Iowa, who was one of the four fans to show up at Zvosec’s radio show and cash in on the brew. “If Zvosec stays with the man-to-man,” Hoffman says, “we’ll keep him.”

Brandon Lipsey agrees. He’s a smooth 6-foot-8-inch freshman forward out of Sumner Academy who is good for at least one SportsCenter-ready dunk a game. He says the man-to-man defense makes the team play more aggressively. “Nobody wants to get beat one-on-one.”

Realistically the ‘Roos are a year away from making a serious run at postseason tournament play. They’ll lose only one starter from this year’s club next season — their defensive stopper, Randall Atchison. Everyone else returns — assuming Watson doesn’t bolt for the NBA draft. He is currently fourth in the nation in scoring, averaging 25.0 points a game.

“After the season is over with, then I’ll have to look at all my options,” a dejected Watson said back on January 25. “It’s all up in the air right now.”

Not unlike the ‘Roos — who were ground-bound only a few weeks ago.