Julep Cocktail Club is off to the races in Westport 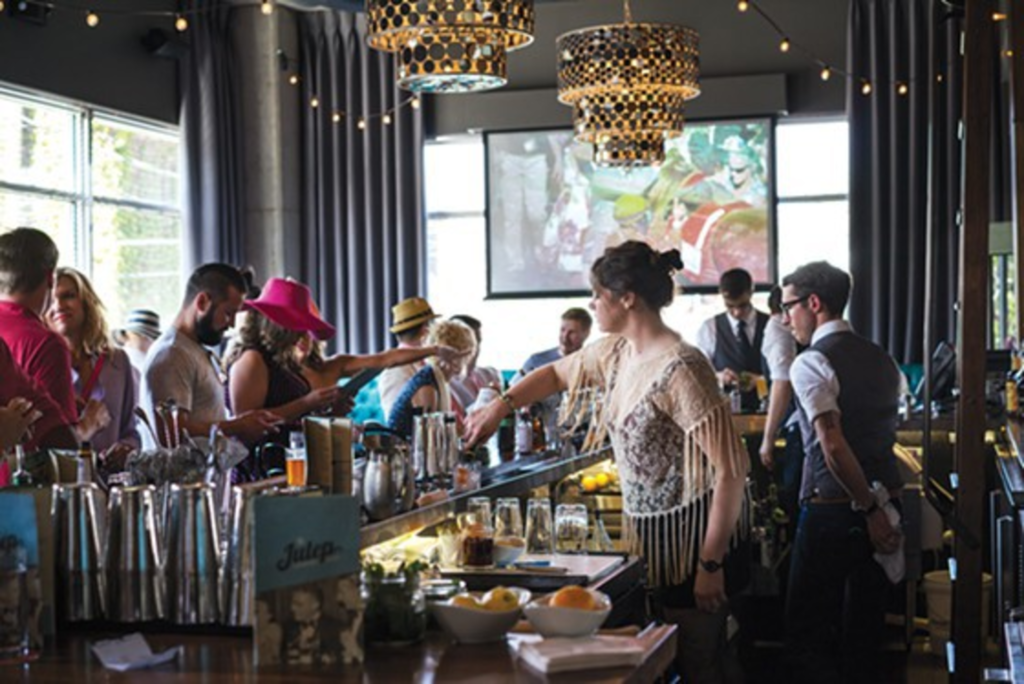 Afternoon drinking, horses, gambling – there is much to love about the Kentucky Derby and its accompanying celebrations. Last Saturday, the most appropriate local establishment to take in the race seemed especially obvious: Julep Cocktail Club, the just-opened, low-country-themed whiskey bar in Westport.

I saw bonnets of various colors, a headpiece that I am told is called a fascinator, some light-colored suits, and some straw hats. Bartenders in vests served up three kinds of juleps: the Vintage (Pierre Ferrand 1840 Cognac, sugar, mint); the Traditional (Buffalo Trace, sugar, mint); and the Modern (El Dorado eight-year rum, Falernum, bitters). California Chrome came in a length and three-quarters ahead. A woman in a flapper dress flashed what appeared to be several $100 bills.

“I think we went through 6 pounds of mint on Saturday,” says Beau Williams, who co-owns Julep with his wife, Keely Edgington. “It’s been a bit of a whirlwind in here ever since we opened.”

Williams is one of the creative forces behind the cocktail lounge Manifesto, which he managed until recently, and he designed the drink menu at Westport Cafe and Bar. As at those places, the drinks at Julep are smart. The faux-Southern-aristocrat quotient won’t be nearly as high the rest of the year (though a similar celebration is on the way for the Preakness), yet Julep seems sure to draw big crowds regardless of the occasion. It’s an excellent bar that’s already operating at a pretty high level.

Like Port Fonda – with which it shares an address, 4141 Pennsylvania – Julep’s exterior resembles a dentist’s office more than it does a drinking-and-dining destination. Port Fonda has combated this (as has Ça Va, a block down) by affixing artsy decals to its windows. Julep has installed an understated, classy little sign above its door that simply reads “WHISKEY.”

Inside, things get more opulent, and more permanent-seeming. “We wanted to make sure the bar was built in a way where it would still be here in 50 years,” Williams says. And in some ways, the place looks as though it’s been here that long already. The plantation-chic decor reflects, Williams says, a hodgepodge of design tones: art deco, the 1920s, Spanish and French, modern and classic. Gold chandeliers shaped like upside-down wedding cakes hang above the bar. Festoon lights dangle.

But the bar is the real show-stopper, with something like 300 bottles of liquor (200 of them whiskey) taking up five 20-foot rows of wood shelving that stretch nearly to the high ceiling. It’s a dizzying sight; Williams calls it “the beast.”

The food menu, designed by John Brogan (a right-hand man of sorts to Rye and Bluestem’s Colby Garrelts), is inspired by the low-country cuisine of Charleston, South Carolina. It’s mostly snacks: deviled eggs, pimento cheese, a charcuterie board. Among the more substantial dishes is the Gulf shrimp po’boy.

But cocktails are the draw, and I can vouch for several of them. I especially dig the Monarch (Rittenhouse Rye 100, Cocchi Vermouth di Torino, Luxardo, Olive Heights Braeburn Belle bitters, $11) and the Soft Conspiracy (Great King Street Scotch, Aperol, Pierre Ferrand Dry Curaçao, $11). A few people have told me they find Julep’s juleps a little on the sweet side. I took a few sips from my companion’s Vintage julep and found the drink heavenly – perhaps it’s best in smaller doses.

Julep doesn’t serve draft beer and stocks only Boulevard bottles ($5 – $6). Yes, the bar sells scotch that costs $125 a glass, but you can get $2 cans of Hamm’s and PBR, too. There are also shot-and-beer deals, like the Ozark Justice (a can of Coors banquet beer and a shot of Slow & Low Rock and Rye, $7). Julep is a little like Harry’s Bar & Tables (or even Harry’s Country Club) in that regard: classy but not snooty, comfortable, a place for adults. Williams says that’s been the plan all along.

“I really like that we have a guy with a wadded-up $5 bill ordering an Old Style at one end of the bar and a guy paying with a black AmEx on the other,” he says. “That’s the kind of eclectic crowd we wanted when we first started talking about this bar, and so far, that’s what we’re getting.”