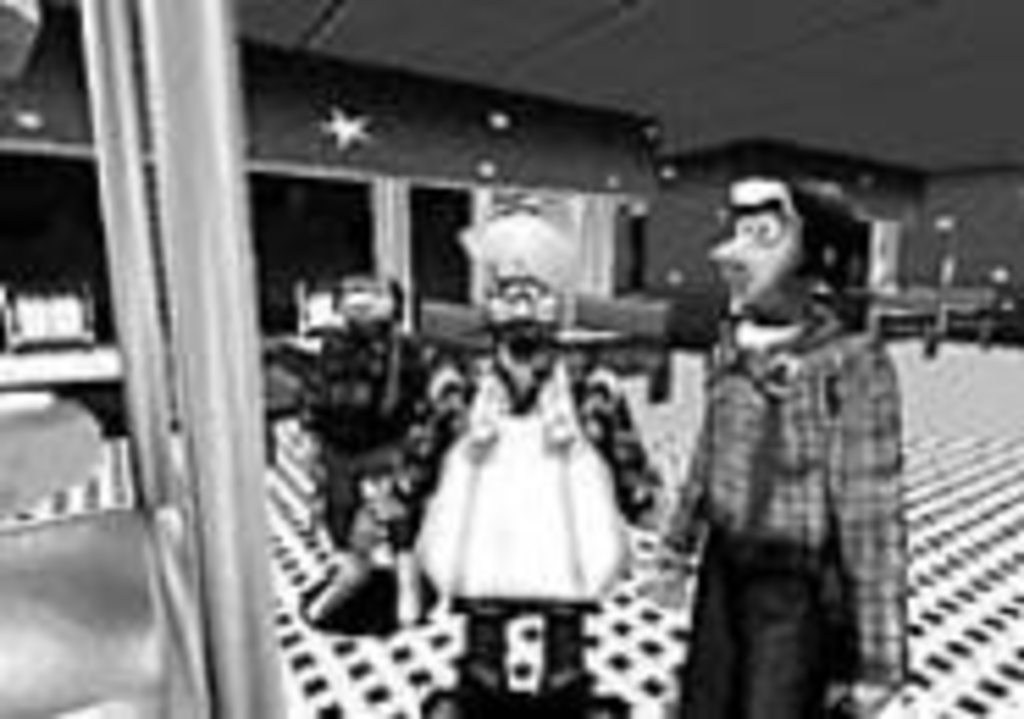 Up to a certain point, Paul Marino’s story is a familiar one, especially to any single guy in his 20s who likes playing with his joystick. Four years ago, Marino and his pals would leave their offices on a Friday night and go to another friend’s workplace, where they’d play Quake, the enduring first-person shoot-’em-up video game, till the sun came up. (This, incidentally, is way down the list of methods for impressing, make that meeting, women. The only thing lower, actually, is moving into and never leaving a men’s locker room.) But there’s only so much game-playing a grown man can take. Actually, there’s only so much watching another dude playing a video game anyone can stomach.

So, one night, Marino and his pals started talking about this oddball piece of moviemaking they’d heard about, a bit of animation called Operation Bayshield “filmed” entirely within their beloved Quake universe. It kinda looked like Quake, from its characters to its scenery, but sounded very much like a Saturday Night Live sketch, complete with multiple characters spouting dopey pop-culture jokes. OpBay, as it would come to be known, was such a freaky hybrid—”a Quake movie,” as it was then called—it captivated Marino and his buddies, all film majors and animators not long out of college. OpBay was little more than the product of a few pals killing time during what was no doubt a lubricated New Year’s Eve—”we thought [it] would be fun,” explained one of its creators—but, in time, it became The Jazz Singer of a new genre of filmmaking called “machinima,” in which aspiring animators unlock video-game code in order to break into the world of moviemaking. Oh, yes, it’s as effed-up as it sounds.

Look no further than Marino’s 2000 film Hardly Workin’, a 16-minute comedy starring two lumberjacks, Lenny and Larry, applying for a job at a cafe. (It’s a sequel to an earlier short, 1998’s Apartment Huntin’, that’s far more rudimentary—less a premise than a promise of things to come.) If you didn’t know better, you’d swear the thing was run-of-the-mill computer-generated animation—a little rough, maybe, but not so shoddy it detracts from its entertainment value. (Fact is, it almost looks like claymation till the cartoon turns mildly violent, in keeping with its vid-game roots, so you keep wondering when Davey and Goliath will show up spouting Bible verse.) But look closely, and the “sets” and “props” look mildly familiar to anyone who’s killed an hour or a week or a lifetime plugged into Quake III, from which Marino and his creative partners—known, collectively, as the ILL Clan—appropriated their virtual surroundings.

“We just said, ‘This is such a great vehicle, and look what they’re doing; you know, maybe it’s something we can do,'” Marino says from his offices in New York City. “We all come from different backgrounds that have some creative flair to it; we play Quake often enough, so we created our first film called Apartment Huntin’, which was really a kind of ‘proof of concept’ for us. It was like, ‘Can we do this? What can we do to see it work?’ The Quake characters initially have axes in their hands, so we just rolled that into making them lumberjacks so we could justify this whole thing. After we finished that, we got such a good response we decided to make another film, Hardly Workin’, only this time we decided to kind of take it as far as we could, which meant creating all new assets, all new characters, everything. We wanted to show it around, be able to distribute it without it being so tied to the game from which it came and to give it, of course, its own look and feel.”

Machinima, in short, is what Scottish filmmaker Hugh Hancock calls “an adaptive technique, something out of a Bill Gibson or Bruce Sterling novel…a whole collection of different technologies grabbed and dragged together” by kids with digital cameras who aspire to make something bigger than mere real-world movies. It merges video games and digital video, allowing its practitioners—its directors—to “film” CG characters in a virtual reality using little more than cracked computer code and a joystick. All you have to do is tape some dialogue, use a few tools to create characters and props and sets, then record it all in real time. It’s more like puppeteering than animating, actually, since the director controls the characters’ actions with a joystick or a keyboard or a mouse—point and click, in essence, without shouting “Action!”

Still have no idea what the hell we’re talking about here? Be patient: Machinima is in its infancy, a child trying to read The Odyssey before it has uttered its first word. To that end, Marino and a handful of would-be filmmakers have actually formed the Academy of Machinima Arts & Sciences, the mission of which is to “promote, organize and recognize the growth of Machinima filmmaking and filmmakers,” according to the organization’s Web site (www.machinima.org). Marino’s the executive director of the academy, which is based in Manhattan, but a handful of machinima mavericks sit on the board and wield equal power. Among their ranks are Hancock, who runs www.machinima.com, an impressive site containing not only films but also several lengthy how-to essays; Anthony Bailey, whose Quake Done Quick was among the earliest examples of machinima; and Katherine Anna Kang and Matthew Ross, whose Fountainhead Entertainment develops animation specifically for “new media” applications.

Fountainhead and the Academy are also producing the Machinima Film Festival, which takes place August 17—in, of all places, the Traildust Steak House in Mesquite, where Jerry Hall and the Mesquite Rodeo are about as cultural as that town gets. (As a native Dallasite, I always thought Mesquite was French for “mullet.”) Actually, there is a relevant connection, as Mesquite is also home to iD Software, inventors of Quake and, for now, quiet supporters of machinima, at least until its practitioners figure out how to make money by distributing their films outside the confines of the Internet. The film fest is tied, quite loosely, to the annual Quake Con, where gamers from all across the country gather outside Dallas to pay homage to the iconic smorgasbord of shoot and splat.

And the fest promises a handful of offerings that transcend being novelties and demo reels full of potential. Most of what’s going on still resides in the domain of the cybergeek toying around in a virtual reality, which is why some of the best examples of machinima either look like The Matrix or quite literally re-create scenes from that film and set them within the Quake dimension. But for every experiment, for every toe dipped into the choppy waters of a new technology, there’s a brilliant piece of work waiting to be discovered. Look no further than Hugh Hancock’s Ozymandias, a sparse, hypnotic adaptation of Percy Bysshe Shelley’s poem in which a longhaired stranger (the “traveler from an antique land”) wanders the desert and stumbles across a headless statue (“two vast and trunkless legs of stone”). It’s a literal adaptation, but also a spellbinding hint of machinima’s potential: The film contains barely a hint of its video-game roots, which are buried deep beneath the expanse of computer-generated sand.

Which is why Marino and his mates in the Academy of Machinima Arts & Sciences believe the medium could one day be taken as seriously as any other form of commercial animation, such as the Pixar technology used in such films as Toy Story and Monsters, Inc. After all, machinima has several advantages over most forms of animation: It costs next to nothing to produce, at least once you own the software and hardware, and where it takes the Pixar people months to produce a few seconds’ worth of cinema, it takes as long to make a machinima film as it does to alter the code in your own image. Remember: You’re just changing existing sets and existing characters, making them over to fit your film—your comedy, your thriller, your bloody action movie. It’s cinema-on-the-cheap—a set change, a wardrobe change, but little more.

And machinima is garnering some kind of acceptance among mainstream filmmakers: Steven Spielberg and the wizards at Industrial Light and Magic broke the code for the video game Unreal Tournament so they could block out scenes for A.I. Artificial Intelligence. It was far less expensive and far less time-consuming than using computer animation, and far more useful than drawing out sparse storyboards.

“It was a tool for Steven to be able to say, ‘Hey, guys, here’s the shot I created while I was on the plane; replicate it in the effects work you’re doing,'” Marino says. “They didn’t call it machinima, of course, but it is, by and far, that medium…We define machinima as filmmaking within a virtual 3-D environment. That’s a very broad-stroke definition, but to me it’s really a definition between what we do and what animation—what traditional CGI animation—is about.”

In the end, what’s most fascinating about the machinima community is how much of a community it really is—if not a collective, then at least a group of like-minded pioneers struggling to gain recognition and respectability for this child they’re raising. That’s why they formed the Academy in March, during the Game Developers’ Conference in San Jose, California: to protect machinima while it’s still vulnerable to less well-intentioned interlopers who’d seek to shape and name it in their own image. They share common goals, a common language—and common jokes. “You know you’re producing machinima,” Hancock writes on his Web site, when “you haven’t seen daylight in over a month [and] people compare your work with pre-rendered 3D, and you really can’t see what they mean.” Uh…hmm.

“A lot of people didn’t, quote-unquote, get it,” Marino says of the medium—and, he knows, they still don’t. “Most people are just looking at what they think is animation, but it really is a different message. It is entertainment, of course, but it’s not. The production technique in which it’s developed is innovative, and we knew that we were all having a hard time by ourselves, trying to get people to notice what we’re doing. Part of the reason why we were having this problem is because there’s no unified voice. And while we’ve had some success, we realize there would be a stronger voice if we were all kind of saying it together. The successes therefore could double or triple because we were looking at it from more of a medium standpoint than just one lone gun saying, ‘Hey, look at the stuff I’m doing.'”