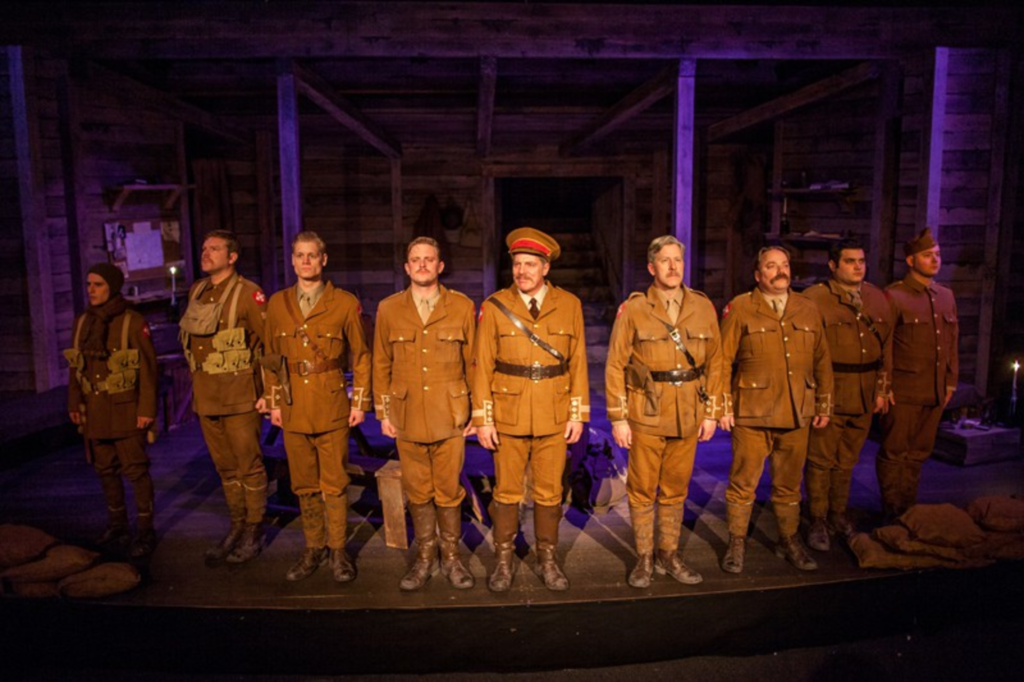 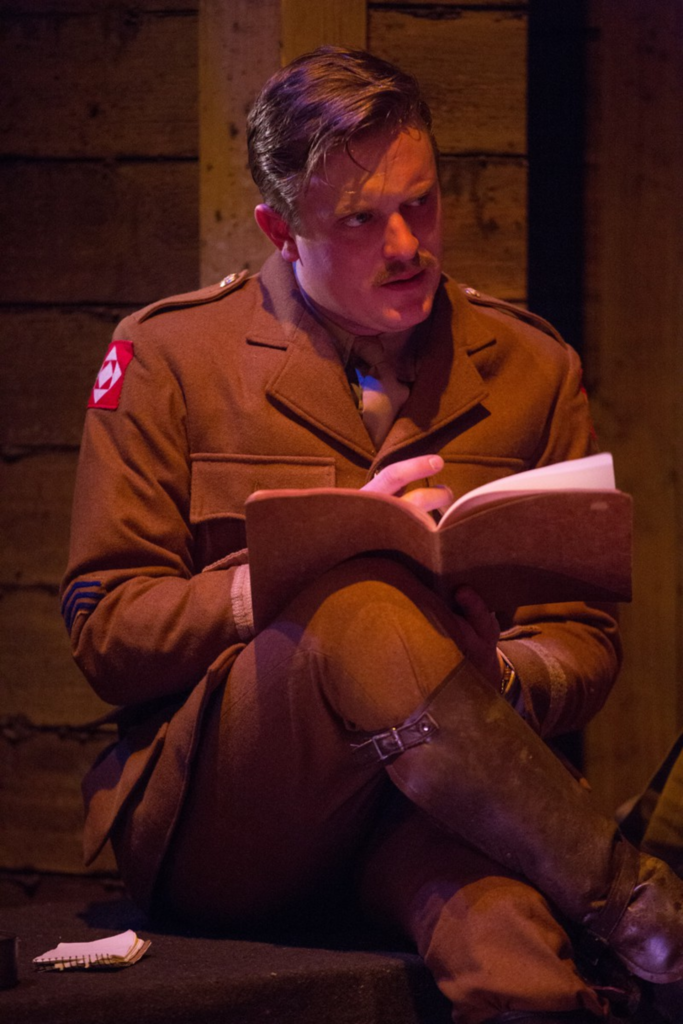 As the World War I centennial approaches, memorials and monuments take on greater significance. But the distant solemnity of cold marble and bronze leads to an uncomfortable question: Are we remembering the actual people?

Kansas City Actors Theatre and UMKC Theatre restore our proximity to the fighting men with their co-production of Journey’s End at the National World War I Museum. Playwright R.C. Sherriff, himself a veteran of the Great War, offers a complicated and compassionate look at the lives of British officers near the front line.

Sherriff’s play chronicles war’s banalities as much as its battles. All three acts take place in a dugout in the trenches of Saint-Quentin, France, where the officers of C Company swap stories. Intelligence suggests a German attack is imminent, and as each quiet hour passes, the tension mounts, the men winding their watches or counting down the minutes aloud.

Director Mark Robbins submerges his talented cast in a pressure cooker of nervous energy. Jacob Aaron Cullum finds the earnestness in Raleigh, the newcomer eager to please Capt. Stanhope, his schoolboy idol. Matt Leonard is explosive as Stanhope, a young commander with the cynicism (and liver damage) of a much older man. He’d sooner stomach a bottle of whiskey than an ounce of hero worship, and his hardened temperament clashes with Raleigh’s naïve enthusiasm. Spencer D. Christensen makes a sizable impression in a small role as the cheerful Capt. Hardy, and Charles Fugate’s Lt. Osborne is tender and paternal.

Matthew Rapport explores every nuance in his portrayal of the preternaturally steady Trotter, lending the second lieutenant a voice as full and butter-rich as Trotter’s figure. His banter with company cook Mason (Joseph Fournier), over some ration meat of dubious provenance, seems to lighten the men’s load. It’s one of the frequent funny moments in Sherriff’s script, wringing wry British humor from grit and catastrophe. As the forced propriety continues, however, we sense the strain behind the smiles. When two of the men are assigned to a probable suicide mission, Trotter proclaims it “a damn nuisance,” and his resignation hits us harder than any breakdown.

Anxiety boils under the surface instead, made notably manifest in Uldarico Sarmiento’s smart, visually textured scenic design. Devorah Kengmana’s evocative lighting design is similarly attuned to the needs of the production, suggesting dazzling flashes from exploding shells in one moment while allowing us to appreciate the gentle blush of candlelight. And there’s room in Michael Heuer’s dynamic sound design for haunting a cappella war songs and the atmospheric thrum of distant German whiz-bangs and bombs.

The realism on display underscores Sherriff’s ambivalent attitude toward combat. Like Stanhope, the playwright rejects hero worship and glorified depictions of war, choosing instead to focus on the strength of the relationships among these men. It may be the highest compliment I can pay these actors to say that it’s hard, at the end of the play, to picture the men of C Company cast in bronze. They’re just men — capable of heroism, yes, but also cowardice and vice, love and longing.