“Regardless of the state of the world, Gingerbread Lane has a nice escapist, albeit ephemeral, quality.” 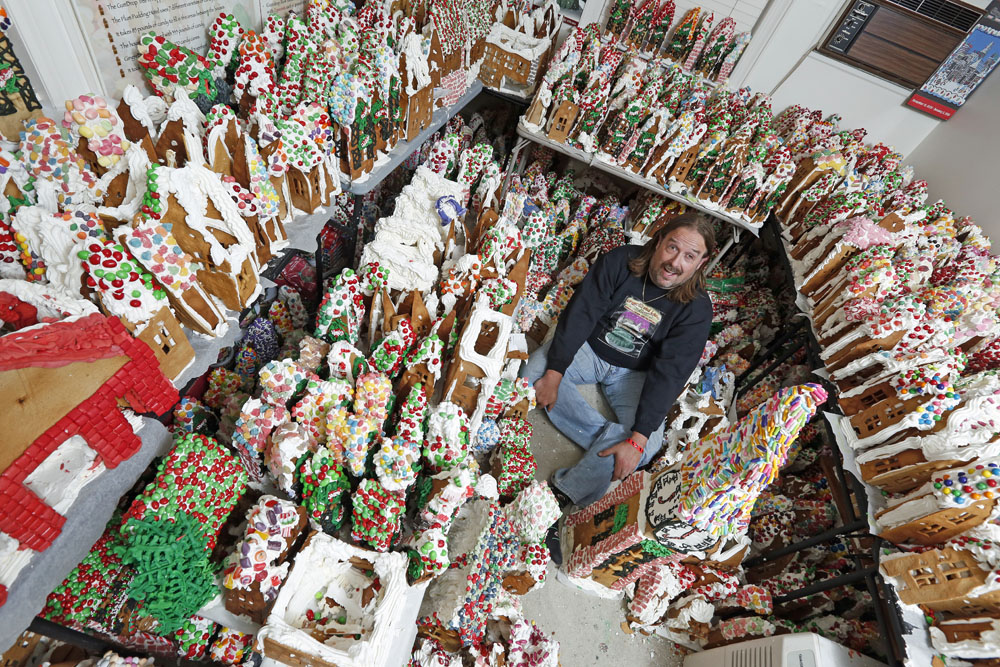 Jon Lovitch amongst his gingerbread village inside of his Forest Hills home, Queens, NY. // Courtesy of Jon Lovitch.

It’s 4 p.m., and Jon Lovitch is hauling cardboard boxes full of constructed gingerbread homes from his Penske cargo van into the Toy and Miniature Museum. He’s covered 2,000 miles with what he claims to be 2,000 pounds of gingerbread, candy, and icing for his 50th iteration of Gingerbread Lane.

“This morning was exceptionally windy. My cargo van was wiggling, so I had to slow down. Living in NYC, the hardest part is actually getting out,” says Lovitch.

Amazingly, the majority of Lovitch’s gingerbread village arrives intact and slowly fills a room in the northwest corner of the museum. The sun is sinking into the horizon, and the glass panels allow streams of warm light to bathe tables cloaked in white.

Lovitch’s mom, Vickie Lovitch, and his aunt, Cynthia Cline, are cross-legged on the wood-paneled floor, meticulously applying red and green gumdrops to the front sides of the tablecloth with royal icing that dries within minutes.

Vickie Lovitch denies that Jon Lovitch inherited any creativity from her, although she admits that she was always crafting in his younger years. 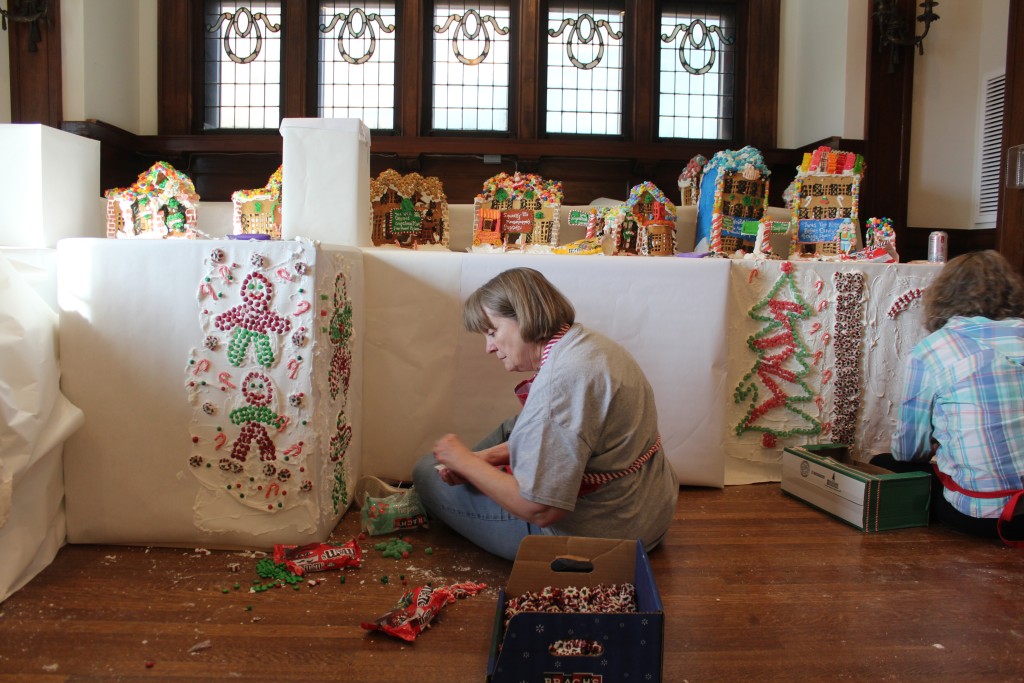 “I generally employ the help of one or two people at most at the very beginning stage. After that, I am too particular about how I want things,” Jon Lovitch says.

This year, Lovitch has relinquished a bit of control. Stephanie MacDonald and Sarah Franson graduated from Fort Osage with Lovitch. The three have kept in touch through Facebook over the years, but today is the first time they’ve shared physical space in 40 years.

Their connection is palpable. An effortless banter complements the Christmas music that is shockingly inoffensive considering it’s early November.

“There’s just a warm feeling that comes with being around someone you grew up with who understands you without requiring any explanation,” says MacDonald.

Jon Lovitch emits a certain warmth in general. He confesses that he’ll anonymously hang around his exhibits, soaking in unfiltered reactions to his baked wonderland.

“Regardless of the state of the world, Gingerbread Lane has a nice escapist, albeit ephemeral, quality,” says Jon Lovitch.

It might come as a surprise, then, that an undercurrent of bitterness defines Jon Lovitch’s persistent success. The concept was conceived in 1994 when Lovitch entered a gingerbread house competition in Prairie Village called Gingerbread Lane. 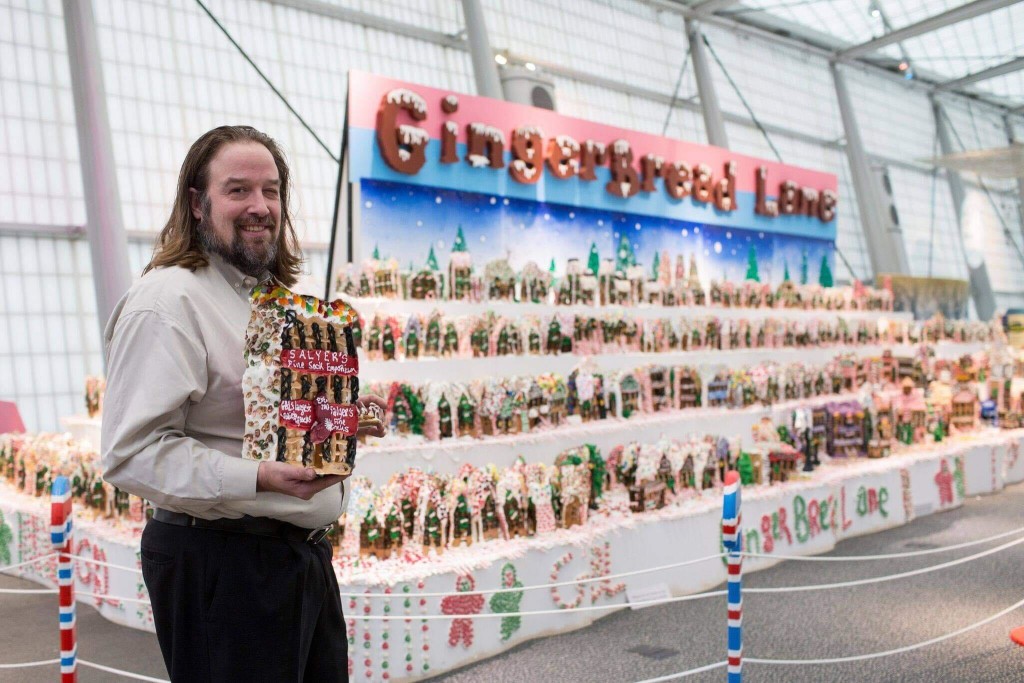 For the past 28 years, his displays have grown in complexity and scale (although elements of KCMO like Topsy’s Popcorn, Crown Center’s Ice Terrace, and Union Station’s train station remain), with appearances in D.C., New York City, and Norway. This year, following his stint in KC, Gingerbread Lane will appear at the Leonardo Art Museum in Salt Lake City and Essex Market in NYC.

“When I met my wife eight years ago, it was a selling point. And I used that—I put that in my first email with her,” Jon Lovitch says.

It was more recently that Jon Lovitch pursued Gingerbread Lane as a full-time profession as opposed to a passion project.

“I was running kitchens at some of the nicer hotels, like the Algonquin, in NYC. To give up the paycheck, the security, and what I’d been passionate about for 20 years… to walk away from that was daunting. I was kind of done with it, though,” he says.

Jon Lovitch’s direction may have shifted, but his work ethic remains. He starts baking new gingerbread houses on the week of Christmas before the following season. His home in Queens, which he shares with his wife and four-year-old daughter, is eternally packed with gingerbread structures and dehumidifiers.

“People come over and tell me, ‘Wow, your house smells so good.’  What is it that you’re smelling? Because I smell cat litter, laundry detergent, and the meal cooking on the stove. I am not picking anything up. I’m immune to it,” he says.

Jon Lovitch does eventually take a break. At the end of the year, once his gingerbread homes have been distributed to people as bird feed or next year’s decor, and before his baking really ramps up, he’s known to sleep often and ski in the Poconos Mountains. He’s eager to visit Snow Creek, where he learned to ski, when he’s back in Kansas City in January.