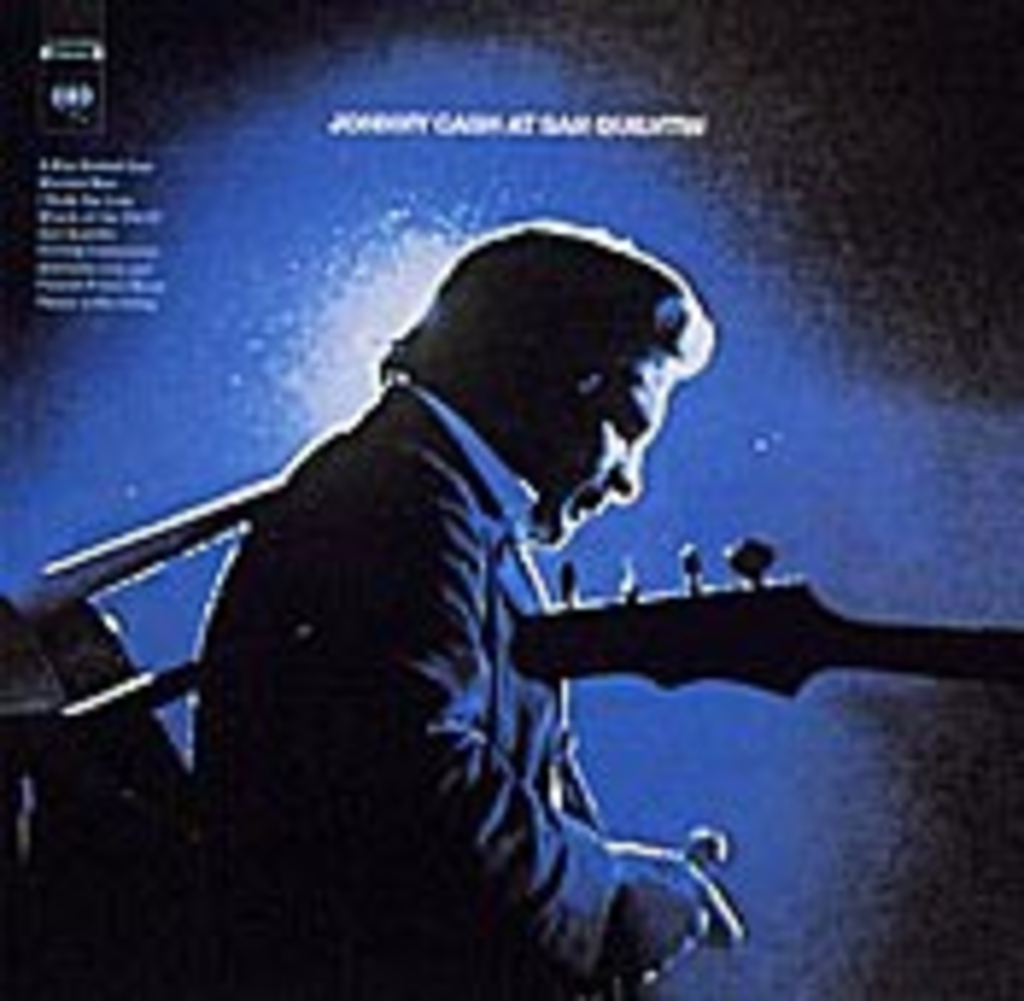 “I’m Johnny Cash,” drawls the Man in Black as he dives headfirst into “Big River” at the start of At San Quentin. It’s February 24, 1969: The British Invasion is about to birth heavy metal; the Beatles are nearly through; Richard Nixon has just been sworn in; in five months, Neil Armstrong will walk on the moon; and the Vietnam War is still six years from a conclusion. However, all the cultural milestones that make the ’60s a watershed or a disaster for those who lived through the decade and those who wish they had mean almost nothing to the prisoners of San Quentin Penitentiary in California. What matters is that a man not quite 37 years old who sings his hard-bitten songs with a leather-whipped voice stands among them to perform a brand-new song named for the jail that holds them. San Quentin/I hate every inch of you, the Man in Black sings, earning an enormous burst of felonious applause.

Columbia/Legacy, the suddenly vital reissue arm of the Sony music giant, continues to polish the country gems in its catalog, a habit that has so far yielded more must-owns than similar efforts from any label but the venerable Rhino. At San Quentin, a one-stop market for a chunk of Cash’s most recognizable songs, is the peak of their first year of Nashville re-releases. The disc finds Cash firm (it was this concert that gave us his famous bird-flip photo), witty (“Someone tune this sonuvabitch for me,” Cash says after an aborted attempt to ready his guitar for “Starkville City Jail”), and backed by one of his best bands (including Carl Perkins). The boom-chicka-boom he perfected here takes on the staccato fury of the inmates for whom Cash is playing.

Now, it might sound quaint, the notion of a mess hall full of pre-Miranda crooks whooping it up to “A Boy Named Sue.” And it might not be Cash’s best song, but remember that its narrator swears fatal revenge against his dad for his name. Even Cash’s tongue-in-cheek rambles pack gangsta-rap-size mayhem. The difference, more than 30 years later, is that Cash’s songs are rooted in the conflict of a wandering heart defending itself, not so eagerly. The songs of discontent now ruling the charts are freighted with aggression, a ruthless, vigilante bent that stomps its beat on racial, sexual, and gender fault lines. That they’re embraced largely by the privileged (where Cash was not) is their most troubling aspect. Could there ever be a Slim Shady at San Quentin LP? Not without a riot; not while divisiveness is pop’s manifest. Cash came to heal.

Cash wasn’t a revolutionary, but his approach was at the root of what became country music’s outlaw movement in the ’70s. He and Merle Haggard, vaunted ne’er-do-wells, were traditionalists. Tompall Glaser and Waylon Jennings were less gospel, more switchblade. Willie Nelson, though, straddled the line, writing “Crazy” for Patsy Cline, then emerging a decade later as a vagabond hero. Red Headed Stranger, a landmark artistically and professionally for Nelson (providing him with the number-one “Blue Eyes Crying in the Rain”), showed a way out for frustrated Nashville artists. Humble Nelson suddenly was a country-music Moses born to part an oozing sea of treacle that was drowning his heritage.

For one, Stranger is a concept record. In 1975, that was old hat compared with rock, but a risky move for Nelson. Despite its quietude — Nelson is often singing alone with his guitar — the disc has the cinematic sweep of a Sergio Leone film. Two years after Bob Dylan’s soundtrack to Sam Peckinpah’s movie Pat Garrett & Billy the Kid, Nelson built the better western soundtrack, a series of haunting vignettes about a wandering preacher that needs no actor to sell its loneliness. The Stranger and the lost souls he encounters are ambiguous figures, mean-tempered but cloaked in spirituality. Nelson didn’t invent the antihero, but he brought it to country and turned it platinum. The remastered version has the de rigueur bonus tracks, which are fine, but the reason Stranger is still essential is that it’s an album that refuses to be yoked by genre, speaking to anyone who will listen. Like Cash’s body of work, Stranger (and most of Nelson’s stuff) makes redemption, not infamy, the point of telling the story.