John Moreland’s voice is the one you’d want to wake you up to in a time of crisis. He’d shake you gently, with quiet, polite words, utter something like, “Buddy, I’m afraid you’re going to have to get out of this truck. It’s on fire.” It would keep you calm.

That’s basically what happens when he sings — except in his songs, the person a little bit on fire is him.

Sunday evening at the resurrected and concert-ready RecordBar, Moreland had a full house sighing with his tales of heartbreak and sorrow. As he took the stage, strapped into his acoustic guitar and began “Hang Me in the Tulsa County Stars,” an absorbed crowd, well-versed in his tales of dirt road loneliness, leaned in to parse every line.

Those lines are worth parsing. Derailed only momentarily by a microphone that fought back, Moreland dove in to “Blacklist,” a song about long-ago rebellious years that struck a chord with most of the audience: “We read all the right books/We sang songs we misunderstood/With or without any reason/ we did rebellion what justice we could.”

After that song, Moreland paused for a minute and laconically joked, “What are my songs?” As the crowd began tossing out possibilities, he gave the barest smile, strummed a few chords and said “I remember one.”

That song was “Your Spell,” a high school story of finding that person who finally understands you … and then losing them. As Moreland sang “You were the queen of my condition/I was the king of the ignored,” it was the beginning of a suite of tales of jagged, bone-weary pain. Lines like “I’m the kind of love it hurts to look at” (from the next song, “You Don’t Care Enough About Me To Cry”) hung in the air around an almost silent crowd. (It was so quiet, the sound of someone filling up the ice bin behind the bar was like thunder in the distance, and it was a comical, tension-relieving break.) 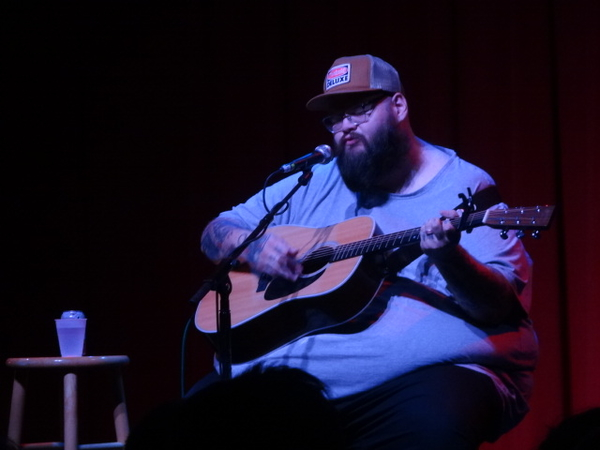 Most of Moreland’s songs are addressed to a nameless “you” who is achingly gone, and most detail a sense of loss (and being lost, and being a loser) that, in a lesser songwriter, might get repetitive. While there is more than a little Bruce Springsteen in his songs — reconfigurings of the past, intricate narratives of struggling couples, Cadillacs (in this case, the devil’s) — they rarely pull up at the end with Springsteen’s graceful, triumphant swoop. Moreland sings from the wreckage, from what might be the moment just before the hero picks himself back up. More frequently, it’s the place where he just gives up.

Part of the gut wrenching value of Moreland’s songs is that when he sincerely sings, in “Heart’s Too Heavy,” “Thought I was someone nobody could love,” it’s clear that he’s felt that way — a lot. The biggest value, though, the part that sinks in, comes from  knowing that everyone else has felt that way, too. In an unnamed new song, Moreland sang the only-just-barely ironic lines, “If we don’t bleed/it don’t feel like a song,” summing up the way he writes perfectly.

At the very end of the show, the crowd finally joined in on “Nobody Gives a Damn About Songs Anymore” for a semi-hushed, respectful sing-along, only building to something close to full volume for the lines “I’ve heard truth is what songs are for/Nobody gives a damn about songs anymore.” When Moreland came back for a quick encore of “Gospel,” and the crowd settled into lines like “I want to find my faith in records from long ago,” it was clear that Moreland’s take on people caring about songs might be an over-generalization. 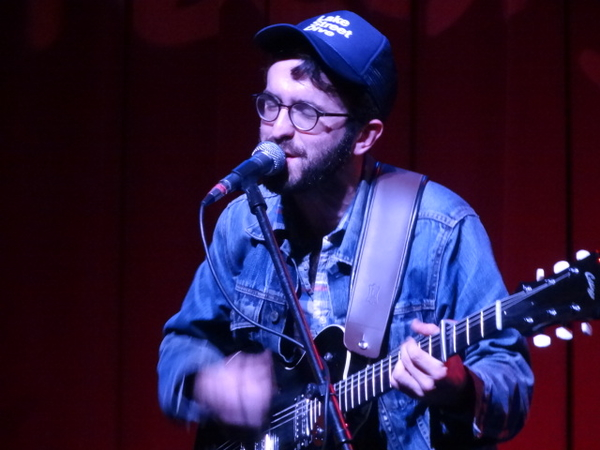 Leftovers: Songwriter Anthony da Costa, a New York native, opened the show for his first official show in Kansas City (after at least two years ago at the Folk Alliance). In comparison to Moreland, his solo songs of picking up the pieces after failed relationships  were practically cheerful. At their core, though, Da Costa’s songs were only slightly less painful than Moreland’s; they were just delivered, and explained, with a wry smile. “It’s about maintaining communication with ex-girlfriends,” he grinned, explaining “Talking To You,” one of several songs that covered that territory. His fascinating electric guitar work, moving from sweet, buoyant riffs to ghostly, jazzy dissonance to Cheap Trick power chords, provided each tune’s undercurrent of sadness. He should definitely come back soon.

Hang Me In The Tulsa County Stars

You Don’t Care Enough For Me To Cry

No Glory In Regret

I Need You To Tell Me Who I Am

American Flags in Black and White

Nobody Gives A Damn About Songs Anymore