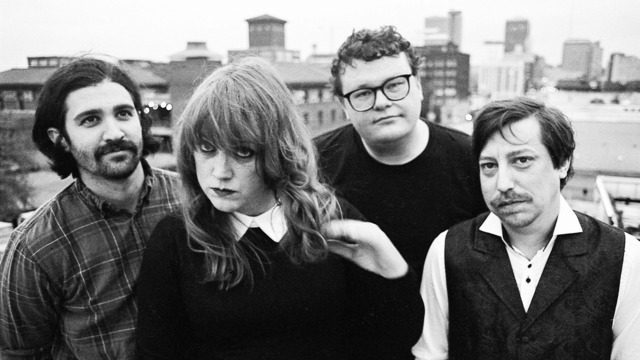 Those last six months in Texas is when everything started to turn, Jocelyn Nixon says, drinking a lemonade at Lawrence’s Decade on an afternoon in early June.

“I’d left [Kansas City] to work on my marriage,” Nixon continues. “My wife at the time was offered a job and I figured, Yeah, Austin, great music city. I should see what happens. A music city like Austin was the silver lining in moving away from my band.”

That band was Abracadabras, a hooky, Britrock-inspired group that was active around Kansas City from 2006 to 2009 or so. Nixon fronted the band, which also included brothers Collin and Kyle Rausch, who now play in the pop act Shy Boys. “That was, like, the first band,” Nixon says. “I’d been writing songs since I was probably about 22, and that was our first band together. So it was like we all grew up together … Once I went to Austin, I felt like it was time for me to stand on my own.”

The marriage hit the skids a few years in, but Nixon continued writing music. She released a solo project called English Major, a divorce record of sorts. Five years in, though, everything finally seemed to come to a head.

“The traffic, the cost of living — our rent went up $750,” Nixon says. “It was almost impossible to stay. I was like, Why am I killing myself to do this? I was also starting to come to terms with my own personal identity, and it blew into this existential crisis, where I was like, I can’t keep this bottled up anymore.”

Nixon’s referring to her recent transition into life as a woman, a process she’d started early during her time in Austin — “Tweezing my eyebrows, laser hair removal, therapy, going out more in femme,” she says — but largely abandoned after her marriage fell apart and she stepped into a new relationship. But the desire to transition hadn’t gone away; Nixon was just burying it.

“I was depressed to the point where I kind of — there’s that line in ‘Yer Blues,’ where John Lennon’s like, Feel so suicidal/ Even hate my rock and roll.’ I was like, ‘Oh, I get that line,’” Nixon says. “I didn’t ever feel like I was going to commit suicide, but I had this fantasy of faking my death and becoming a new person, which was all sort of leading me to transition, but I was just miserable and I just didn’t want to be around it.”

She decided to leave Austin and return to KC, though moving back home as she transitioned wasn’t something Nixon was initially eager to do. “I thought it was scarier to move back,” she says. But then she realized that, as she says, “I needed to do this in front of the people I grew up with, and have those tough conversations, and tell them who I really am and how I really  feel. It felt like the most honest way to do things, and it felt like the most authentic way to bridge my past to my present.”

Nixon started hormones and came out as a woman after she moved back home to KC. She says everyone’s been cool about it — tons of support.

“When I came out, I felt stupid, because I was like, ‘I should’ve done this sooner,’” she says. “An immediate weight lifted off of me, just from carrying the weight of that consuming all my mental faculties at all times. It just shot my nervous system.”

Then came the Creepy Jingles.

Nixon had quit playing music toward the end of her time in Austin, and she gave herself a few years during her transition to “get my head right and heal from a breakup, and also, approaching this new phase in my life,” as she puts it. But she kept writing songs. She started jamming with Nick Robertson, a drummer. Then they brought in Travis McKenzie, a former Abracadabras guitarist, and the Creepy Jingles were born. They played around for a few years and then, last year, began recording what would become their debut self-titled EP.

“We took it slow, doing it like, once a week, and then once fall rolled around, we were like, ‘Let’s record some things,’” Nixon says. They took the music to Ross Brown, another Shy Boy, who recorded and mixed the EP in his basement. Collin Rausch ended up playing bass on it (Adam York has since joined the group as the full-time bass player).

“It was kind of like a little family reunion,” Nixon says of reuniting with some of his old bandmates.

The EP was released on High Dive Records at the beginning of May. It’s confident and exuberant, a Kinksy mishmash of Britpop garage rock. You can hear the songs live for yourself this Thursday at the Replay.

We finish our lemonades and get ready to head back outside. I tell Nixon she strikes me today as somebody who’s quite sure of who she is.

“I am now,” she says. “I don’t know if I was years ago. I felt like I had to adopt a mask or a character to protect myself a little bit onstage. Now it feels very me, and I’m very comfortable.”