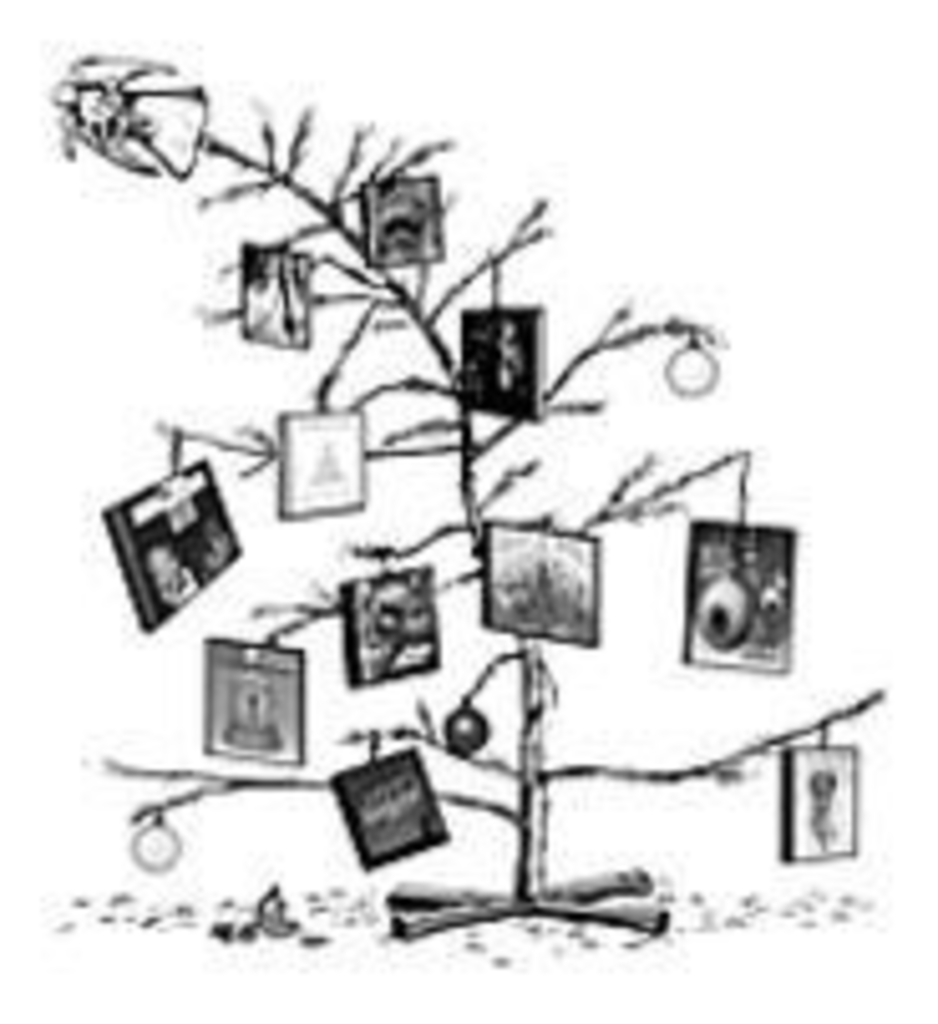 Asylum St. Spankers
Christmas Spanking (Bloodshot)
“Seems y’all been very naughty,” Asylum St. Spankers percussionist Mike Henry says during the introduction to his group’s live album, Christmas Spanking. “We think that’s nice.” So to reward its ruddy-faced, red-nosed hometown fans for their rowdy behavior, this completely acoustic (no microphones or amps) Austin-based outfit slaps its distinctive handprint on fifteen holiday-themed selections. Its most delightful present, a gleefully eclectic version of “You’re a Mean One, Mr. Grinch,” veers from washboard-and-fiddle country to a spirited pairing of Spanish vocals and Flamenco guitar to a gruff, Tom Waits-style finale. This usually boisterous (and often racy) ensemble keeps it clear and clean through most of these carols. Singer/ukulele player Christina Marrs shines with her solo rendering of “Blue Christmas,” and her vocal counterpart, Wammo, turns “Rudolph the Red Nosed Reindeer” into a low-key blues shuffle. But Christmas Spanking isn’t without its hot spots, such as the toasty duet “Baby It’s Cold Outside” and the chestnut-roasting “Trim Your Tree.” One of the year’s top seasonal offerings, Spanking appeases the Great Pumpkin by including both a Charlie Brown cover (well, Charles Brown’s “Merry Christmas, Baby”) and a revamping of Lucy and Linus’ theme that evolves from Dukes of Hazzardous backwoods instrumentation to scat-driven jazz.
—AM

Barbra Streisand
Christmas Memories (Columbia)
For a moment, at the beginning of “I’ll Be Home for Christmas,” the track that opens Barbra Streisand’s first holiday recording in 34 years, there is reason to believe that elves (high-powered agency elves) have somehow assembled a mature, sincere set of standards and respectable recent songs. But then someone flips on the little programmed drummer boy, and a chromatic harmonica trills along with Streisand as though the song — or Streisand — needed a touch of homespun warmth.

Humbug. It’s nothing more genuine than the crackle of a burning Duraflame log that draws fans to Streisand’s still-pretty, still-aloof voice, a sound that rarely conveys the depth of a song’s lyrics, especially when the material is purely seasonal. We know she doesn’t mean a word of it, but that’s OK; everyone is in on it but Streisand, who still peddles with full audition-strength gusto. At the inorganic heart of this bland platter of giblets is a reverent, tepid “Ava Maria”; it should be redemptive, a moment to remember what used to be impressive about Streisand. But she can muster chemistry neither with the song nor the choir and soloists who join her. Still, as long as they celebrate the holidays in nail salons, this manicured set will have a home for Christmas.

Destiny’s Child
8 Days of Christmas (Columbia)
Rumors of a split don’t exactly constitute glad tidings of holiday cheer, especially when a group has the rare sense of harmony developed by Beyonce Knowles, Kelly Rowland and Michelle Williams. But if Destiny’s Child breaks up, Knowles and Williams, both of whom could shine as soloists, shouldn’t fret. Singing lead on “Silent Night,” Knowles sounds as strong as she ever has, while Williams’ vocals on “O’ Holy Night” make the argument that she’s the trio’s best singer. Rowland doesn’t fare as well on her solo shot, “Do You Hear What I Hear?” and the group falters together with the clumsy title track, the flat “‘DC’ Christmas Medley” and the just-plain-goofy “Platinum Bells.” The disc suffers from weak beats (did the producers get a Casio last Christmas?), but the girls manage to keep the album from freezing with some inspired vocals.
—SE

Various Artists
MTV: TRL Christmas (Atlantic)
Hey, Carson Daly, way to confuse the fat man — your MTV TRL Christmas is both naughty and nice. On the naughty list, there’s fourth-rate material girl Willa Ford cooing “Santa Baby (Gimme Gimme Gimme),” a paean to what Christmas is apparently all about: getting things. The good stuff comes from Weezer and Blink-182, both of whom do what they usually do as well as they usually do it, a rarity for tossed-off compilations. Still, the coal lumps outweigh the worthy gifts.
—RB

They Might Be Giants
Holidayland (Restless)
The holidays are a time for us all to come together, so here’s Holidayland, an EP of Christmas- and Hanukkah-related tracks from They Might Be Giants. In addition to the sole new track, a remake of the Sonics’ “Santa Claus,” the disc offers four previously released gems. The best of these, taken from the group’s second record, Lincoln, is “Santa’s Beard,” in which the narrator’s wife is seduced by a friend dressed as the jolly one. Ho ho ho, indeed. Plus, there’s “Festival of Lights,” originally on the Hanukkah comp Festival of Light 2; “Careless Santa,” from John Flansburgh’s side project Mono Puff; and a German-language version of “O Tannenbaum.” But while these are high-quality tunes, and it’s certainly nice that Holidayland is multiple-holiday-encompassing, this EP delivers a miserly amount of music, clocking in at a Scroogelike twelve minutes.
—RB

B.B. King
A Christmas Celebration of Hope (MCA)
What would Christmas be without a jolly old fat man belting out a little holiday cheer? With his beloved Lucille pressed firmly against his bowl-full-of-jelly belly, B.B. King lets loose with characteristic aplomb and grace on the sultry “To Someone I Love;” the slick, organ-laden “I’ll Be Home for Christmas;” and a number of other carefully chosen favorites that offer a whole new meaning to the term “holiday blues.” In welcome contrast to the annual assault of seasonal Muzak, Christmas Celebration rings as clear and true as a silver bell on a cold December night.
—JK

Various Artists
Making Spirits Bright: A Smooth Jazz Christmas (GRP)
Somewhere among the din of the hustling and bustling holiday shopping at the Gap and Old Navy is a really bad Christmas album merrily chugging away just out of aural reach. If ever overtaken by the need to bring the experience home, mallgoers can seek out that album, Making Spirits Bright. Banal performances such as Joyce Cooling’s sterile cover of “The Christmas Song” and guitarist Jeff Golub’s “Here Comes Santa Claus” might make St. Nick lose his last load of milk and cookies. While a few tasty crumbs shake loose here and there, including Diana Krall’s swinging play at “Jingle Bells” and Joe Sample’s teasing solo instrumental take of “I Saw Mommy Kissing Santa Claus,” this fruitcake just isn’t very appetizing.
—JK

Nancy Wilson
A Nancy Wilson Christmas (Telarc)
Jazz chanteuse Nancy Wilson has made a name for herself by coupling her vocals with some of the best players in the business, including Cannonball Adderley, Art Farmer, Ramsey Lewis and Benny Golson. With her first complete Christmas offering, Wilson continues the tradition by teaming with flutist Herbie Mann and the Dizzy Gillespie Alumni All Star Big Band. From her swanky strut through “Let It Snow! Let It Snow! Let It Snow!” to her gentle rendering of “The Christmas Song,” Wilson injects these holiday standards with a much-needed dose of sincerity.
—JK

Jon Secada
The Gift (Telarc)
After eyeing the smarmy black-and-white cover shot that features Jon Secada striking the quintessential ’50s crooner pose, shoppers looking for a white-elephant present might select this dubious-looking Gift. But if Charlie Brown taught generations of children anything about Christmas, it’s that holiday cheer comes in all shapes and sizes. Secada radiates a comforting warmth throughout this collection, which drips with sweeping orchestral arrangements and traditional song selections. It is old-fashioned and perhaps a little too conservative for those looking for some spice in their holiday music, but it does capture the spirit of the season with its simple charm.
—JK

.38 Special
A Wild-Eyed Christmas Night (Sanctuary)
For years, cultural critics have warned us that blatant commercialism is causing the holiday to lose its luster, but there’s nothing wrong with popular artists (Destiny’s Child, Christina Aguilera) putting out holiday albums, enriching their already supple pocketbooks and the lives of their devoted fans along the way. The operative word there is “popular,” which .38 Special has not been for more than a decade. Sure, avid KCFX 101.1 listeners might still swear by these “Wild-Eyed Southern Boys,” as might people who look forward to the annual visit to NASCAR and the WWF as much as they long for St. Nick. And if you’re lucky enough to have those folks on your list, this might be the perfect gift. But the grizzled arena rockers don’t revamp these standards with much emotion or flair; their only innovation is the decision to use guitar licks in place of string arrangements. The original tunes .38 Special includes aren’t much better, with the ballad “It’s Christmas and I Miss You” the lone exception. By now, music fans know not to expect miracles from holiday releases, but they deserve better than this unfortunate attempt to resurrect the ghosts of good-times past.
—JH

The Campbell Brothers
Sacred Steel for the Holidays (Arhoolie)
“Sacred steel” is a pedal- and lap-steel-guitar-based music that has been nurtured for the past seventy years within the House of God. In that Pentecostal denomination, sacred steel players summon their congregations to worship via a declamatory, highly improvised style built on gospel and blues lines, though they’re nearly as likely to pull Southern-rock or country licks down from heaven. Thanks to the Arhoolie label, this once little-known tradition has become beloved recently by even the worldliest of roots-music aficionados.

The Campbell Brothers — siblings Chuck, Darick, Carlton and Phillip on pedal steel, lap steel, drums and a variety of other stringed instruments, respectively, as well as bassist Malcom Kirby and, on selected cuts, vocalist Denise Brown — are the genre’s most prolific recording act. Their latest disc, Sacred Steel for the Holidays, is a fine introduction to the sacred-steel sound, and it’s also one of the better Christmas albums in recent memory. On the opening “Silent Night,” for example, Chuck Campbell illustrates the church’s “talking steel” style, phrasing the familiar melody like a soul singer uses melisma. The group’s “God Rest Ye Merry Gentlemen” is jazzy and syncopated, its chugging “Go Tell It on the Mountain” features gospel shouting both human and instrumental, and its “Little Drummer Boy” discovers an honest-to-God groove in that song’s notoriously wooden rhythm. Also, highlighting a refreshing ecumenical spirit, the Campbells offer a rocking reading of the “The Dreydl Song” that could make the walls tumble at any place of worship, as well as a seven-minute version of that secular chestnut “The Christmas Song,” on which Brown makes like a mother mesmerizing her children with stories of Santa’s midnight ride.

If you’re familiar with the Campbells’ Sacred Steel on Tour disc or the group’s contributions to Sacred Steel — Live! and Train Don’t Leave Me, these new offerings will likely seem rather subdued by comparison. Then again, in the context of a Christmas album, the effect doesn’t feel like restraint so much as it conjures a fleeting and incomplete glimpse of peace on earth. Which, no doubt, is the point.
—DC