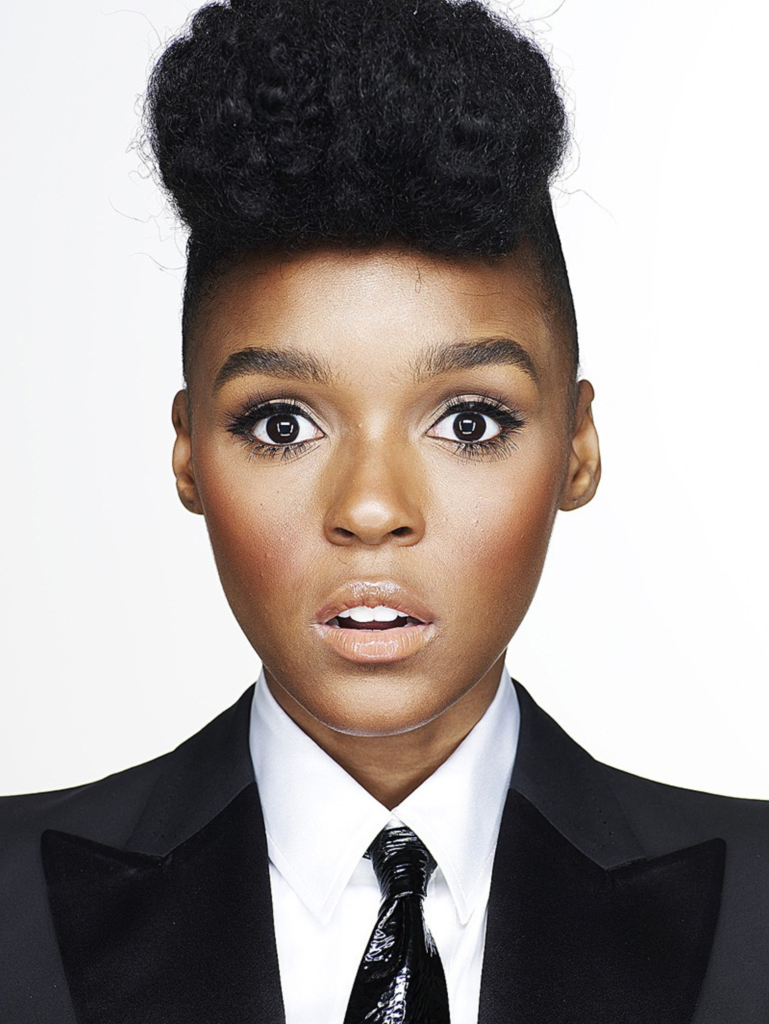 Janelle Monae’s cyber-girl stare, perfect pompadour and stark black-and-white outfits — tuxedos, typically — have landed her spreads in Vogue, InStyle and Essence. Onstage, though, the rising star is giddily human. She captivated the crowd at her Late Show With David Letterman appearance with a one-legged mashed-potato dance and a knowing glint in her eye. (Her soulful, swooping vocals on “Tightrope” may have helped, too.)

But Monae isn’t all style and charm. Later that night, at New York’s Highline Ballroom, her pompadour suddenly fell out, and she showed a glimpse of the woman who existed well before her science-fiction opus did. Stepchild, she sang, freak show, black girl, bad hair.

At 24, Monae has already enlisted Sean “Diddy” Combs and Big Boi of OutKast as co-conspirators in her four-suite series based on Fritz Lang’s 1927 sci-fi masterpiece, Metropolis. (Three of the four suites are out, spanning one EP and one LP, and a graphic novel is in the works.)

In Monae’s version, though, the hero — much like Monae herself — doesn’t come from the upper classes. (The movie’s monster rises up to become, as Monae puts it, “the mediator between the haves and the have-nots.”) Her work synthesizes bright, colorful shards of folk culture — reaching back to madrigals and then forward to big-band jazz through punk and hip-hop — to create something dazzling and new. Music journalists across the Atlantic and back have all echoed the sentiment expressed after a London show in the alt-urban PinBoard blog: “Where did she come from?”

This emergent rock-and-soul hero grew up on the tough streets around 21st Street and Quindaro in Kansas City, Kansas, a community that was established in 1856 when Wyandot Indians and abolitionists assisted runaway slaves. Now, thick black-metal bars cover windows on the few storefronts that aren’t boarded-up. Apart from the modest, A-frame homes, the only signs of vitality revolve around a barbershop, a beauty salon and three churches.

Weathered remnants of an age of hope stand a few blocks away. A statue of John Brown marks the old entrance to Western University, which was originally known as Quindaro Freedman’s School. Founded at the end of the Civil War, it was the first school for black children west of the Mississippi. The house of Monae’s great-grandmother sits just a fly ball’s arch away from the historic statue. A young Monae could stand at the Quindaro overlook and see the spot in Parkville, Missouri, where escaped slaves gathered to catch the Underground Railroad boats that would deliver them to freedom in Quindaro.

Jesse Hope III runs the Old Quindaro Museum and knows all about Monae’s family roots, which date back to 1879. Hope and Loretta Norman, Monae’s great-grandmother, are good friends. A visit to the community museum soon leads to reminiscing in Norman’s neighboring yard about the way the area looked before Interstate 635 tore through it in the early 1960s. “It took a lot of people’s houses,” Norman recalls. “We lost people, but we’ve maintained.”

One thing that both of Monae’s Quindaro great-grandmothers maintained was a family homestead. According to Monae’s father, Michael Robinson Summers, his grandmothers (Norman and Ruby Robinson) played a large role in raising Monae.

The scene on Norman’s porch suggests that role hasn’t changed. Teenagers and younger children trickle in and out of the house. Monae’s aunt, who works as a flight attendant and also is named Loretta, is in town for a few days, and she’s corralling some of the kids to go crawfishing the next day. Both women are proud to talk about “our Janelle.”

Norman brings out a framed portrait of Janelle as a baby, with her parents and great-grandparents. They show other baby pictures, current pictures and magazines. She’s on the cover of Jet. Her aunt just watched her open the BET awards tribute to Prince. “He is a fan of her,” Norman says proudly. Her aunt recalls, “She [Janelle] always had her own way of doing things.”

She certainly did. While attending F.L. Schlagle High School, Monae landed a scholarship to the American Musical and Dramatic Academy in New York City. After a year in New York, disillusioned with academics and Broadway, she set her sights on Atlanta. She moved in with cousins and sold several hundred homemade CDs to college students, until OutKast’s Big Boi heard her singing the Fugees’ “Killing Me Softly” at an open-mic session. She was soon performing with OutKast, and her Big Boi-produced album, Got Purp? Vol. II, hit the streets in 2005. Her two performances on OutKast’s Idlewild came out a year later, and Monae was on her way to becoming a star.

As her aunt is quick to point out, Monae learned to sing in the church, just like everyone else in the family. In many ways, churches have been the hub of the Quindaro community — Baptist, the AME Church, and Church of God in Christ. Members of her family, including her paternal great-grandmother, Robinson, were star musicians in these churches.

Still, it was clear that Monae’s was a different kind of talent. “She used to go to choir with my auntie,” her father says. “And the choir might have a hard time hitting a note. My aunt would say, ‘Janelle, hit that note for me’ because she knew she could always do it.”

A sense of history pervades a childhood in Quindaro. “You can’t hardly escape it,” says 19-year-old Corey Paris, another child of one of the old Quindaro families. He recalls a place, just a block from Norman’s home, where the kids used to play hide-and-seek among crags and crannies that slaves used as hideaways during Bleeding Kansas.

Though Monae has made it clear that she had to leave Kansas City to escape the drugs and violence that surrounded her, she keeps in touch. She mentions her parents in interviews, pointing out that she dresses the way she does because those are her work clothes. She explains that her father was a truck driver — he still is, for Deffenbaugh — and her mother was a janitor. They had their work clothes, and so does she.

“I’ve never forgotten where I come from,” Monae told The Pitch in 2006, before the release of her first Metropolis EP. “It’s crazy, but I really want to be the one to show everyone back home that it can be done. And not by selling drugs but by being passionate about the right thing — and the right things will come your way.”

While the culture around us seems to mourn dreams that have passed, Monae focuses on human liberation. She performs with a fervor that suggests the stakes are high.

“She’s doing what she’s meant to do,” her father says, beaming. “You have not seen anything yet,” he says. “Be sure that you print that.”