Jackson County has paid John Q. Ebert $2 million over the last five years to fix its assessment problems. What exactly has he been doing? 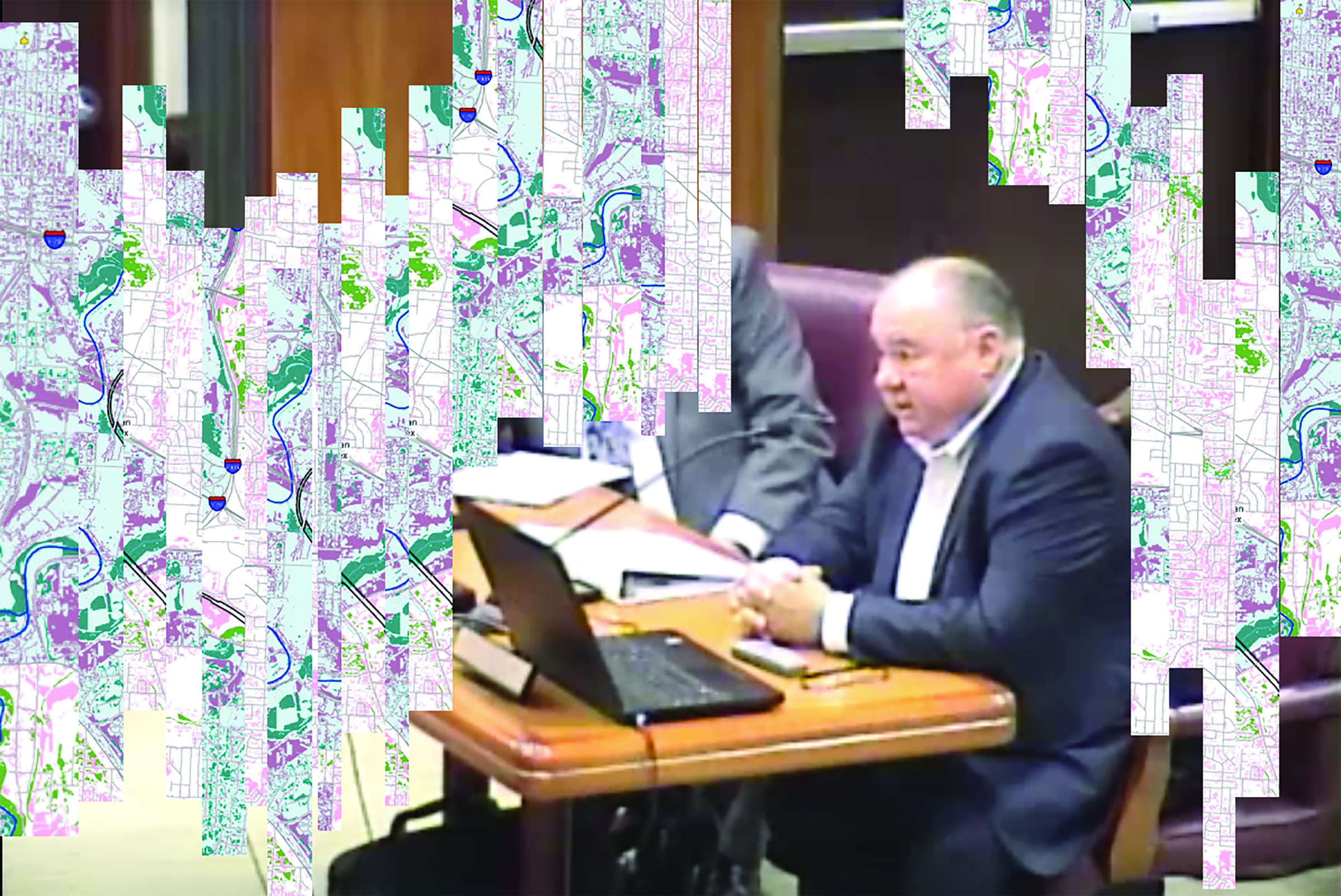 A rare public appearance by Ebert, captured at a 2016 meeting of the county legislature.

The Jackson County reassessment debacle of 2013—the one that sent more than 15,000 angry property owners scrambling to file appeals—was supposed to be the tax bill failure to end all failures.

Turns out, it was just a tune up. This year’s reassessment notices have already generated nearly 35,000 appeals, a class action lawsuit, calls for state investigations, and a growing wrath among citizens.

He would know. As Jackson County’s assessor in 2013, Koons took the fall for that year’s problems and resigned. Since he left, two more assessors have come and gone, along with most trained appraisers.

Through five years of upheaval, the one constant in the county’s assessment department has been the presence of John Q. Ebert, consultant.

What began as a $40,000 contract to Ebert’s company in 2014 to “establish best practices and budget efficiency” has morphed into a five-year stay, nearly $2 million in contract agreements—and widespread befuddlement about what that money has paid for.

Certainly, results would not indicate a roaring success. The 2019 reassessment process is widely regarded as a shambles. Notices to property owners, which normally are sent out the first week of May, arrived in mailboxes in mid-June. Thousands of homeowners were shocked to find their appraised values—and projected tax bills—had spiked by 50 percent or sometimes more. The most severe increases are in lower-income neighborhoods, where residents are frantic about losing their homes, and leaders are leveling charges that minority communities were targeted.

Values of commercial properties appear to be off, also. Grandview Mayor Leonard Jones recently sent Jackson County Executive Frank White a letter complaining that the county only assessed new growth in his city at $2,209,623—even though sales and permits show more than $19 million in new growth over the recent assessment cycle.

Opinions vary as to the degree for which Ebert is responsible for the debacle. Supporters say he made sound recommendations, which were consistently ignored or lost in the ongoing shit show that is Jackson County government. Critics think Ebert’s presence deterred the county from establishing a functional assessment department.

The reality, says Crosby Kemper III, executive director of the Kansas City Public Library, is probably somewhere in the middle.

“I think he is a professional. I think he more or less knows the right thing to do,” says Kemper, whose library funding comes almost solely from Jackson County property tax collections. “But to some extent he’s milking the system.”

Bringing in outside expertise made sense in 2014, after the assessment department’s failure to give enough weight to home foreclosures resulted in skewed residential values in many neighborhoods.

The state of Missouri had recently slashed the amount of money it pays to counties for assessment functions from $6 a parcel to $3. Beyond that, former Jackson County Executive Mike Sanders’ administration was peeling off funding for the assessment department to use for other functions, Koons tell The Pitch.

On the website for John Q. Ebert and Associates, which also goes by E&A Consulting, Ebert summarizes more than 50 years in the assessment business, and takes credit for a number of advances as the field has moved toward reliance on computer programs and data patterns to determine property values. He lists Cleveland and Boston among his clients, as well as several states.

No one disputes Ebert’s expertise with data and technology. But, in the time he has been involved in Jackson County, the assessment department has become heavily reliant on computer-assisted mass valuation of properties, former staffers say. On-the-ground inspections—the most accurate way to glean information—have become nearly nonexistent.

Ebert, in an email, told The Pitch he could not comment due to “pending litigation.” He remains under contract with Jackson County through August, although his company’s role in the botched 2019 assessments is unclear. Ebert reportedly told some legislators earlier this year that he wanted to be let out of his contract because no one was listening to him.

For years, though, Ebert has been collecting big paychecks from Jackson County, with few questions asked.

In October 2014, four months after he came aboard, legislators  authorized an additional $60,000 to extend his stay. They approved a much bigger payment —$270,000—in January 2015, and other hefty agreements after that.

Not until June of 2018, by which point Ebert had already received $1.5 million in consulting contracts, did legislators display much curiosity about his role.

That year, county officials approached school districts, the library, and other jurisdictions that benefit from property tax revenues and asked them to chip in money to help pay Ebert. Kemper said he told the county he would agree if library officials could get an inside look at the assessment process. That fell through and the library never gave the county money, but Kansas City Public Schools and other jurisdictions eventually ponied up a total of $285,810. The legislature was asked to allocate additional funding to bring Ebert’s total contract to $450,000.

Several legislators questioned the expense at a meeting.

Ed Stoll, the county’s chief administrative officer, replied that the assessment department was consistently shorthanded because of low salaries, and Ebert’s expertise was needed for specialized work such as updating property files. “We believe it would facilitate fair and accurate assessments,” he said, adding that Ebert would hire subcontractors to help with the process.

Legislator Scott Burnett, who sponsored the ordinance, said he had been told that Ebert would “have three or four dozen people here. Pulling them from all over the country.”

But that apparently never happened. A few days after legislators approved a $450,000 contract for Ebert in a unanimous vote, assessment director Robert D. Murphy resigned.

“With the approval of such a large amount of funding for Mr. Ebert, it is clear that I will be a barrier at this point…” Murphy said in his resignation letter.

Murphy was the second director of assessments to have taken the job and resigned while Ebert was involved with Jackson County. The current assessor, Gail McCann Beatty, took the job about a month after Murphy resigned.

The county had seen other changes as well. Mike Sanders, whose administration hired Ebert, resigned abruptly and is now in federal prison for crimes related to abuse of campaign funds.

Frank White, who risks becoming as legendary for incompetent leadership as for his storied career with the Kansas City Royals, replaced Sanders and was elected to a full term as county executive in 2016.

The ongoing dysfunction in the county executive’s office is mirrored in the breakdown of core functions. The Jackson County Jail has become a dangerous, terrible place and White hasn’t yet announced a plan to fix it. And now the assessment scandal is destined to occupy the county for months to come.

Kemper shares a view with many neighborhood leaders and others that property values in Jackson County have been skewed for years, and a key reason is the county’s deference to politically connected owners of commercial properties. Perhaps the most egregious example was a series of controversial decisions in 2017 resulting in the Country Club Plaza being assessed at $145.5 million a year after it had sold for $660 million.

“Real estate interests and development lawyers control this city,” Kemper says. “Assessments have always been politicized. No one’s ever reformed it.”

Most experts agree that Jackson County commercial and residential properties as a whole have been traditionally undervalued. Ebert supposedly devised a plan for raising the values fairly over time. But it has never been made public, and nothing about the 2019 reassessment speaks to fairness.

With adequate funding and political courage, Jackson County leaders had an opportunity to fix their troubled assessments system after 2013. They chose instead to outsource the job to a consultant. And $2 million later, they have only furious residents and lawsuits to show for it.