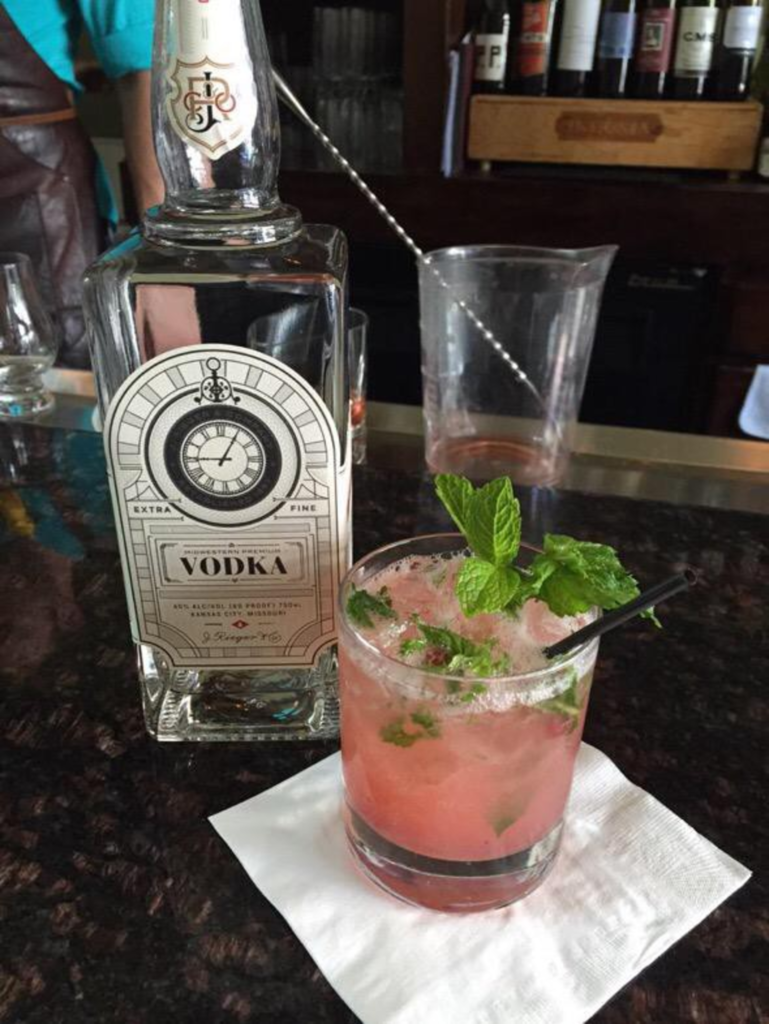 “We decided to do the vodka awhile back,” Ryan Maybee, co-owner of J. Rieger & Co. and partner at the Rieger Hotel Grill & Exchange, tells me. “It hasn’t been in the works for years like the whiskey has, but it was in our heads when we launched the company. It took some time to select the bottle and design the label and get the ingredients approved, all of that.”

Maybee’s extension of the J. Rieger & Co. brand brings up a few more questions, and one in particular: What’s next?

“We’re definitely going to have some more products,” he says. “You can expect more products out within the next few months, definitely by the end of the year. We were never going to be intent on just having one product like the whiskey, but we do think it’s going to be our primary flagship product.”

One of the primary differences between the Rieger vodka and a good deal of other recipes, Maybee says, is that the Rieger uses a mix of grains: corn, wheat and potato.

“We’re using a whiskey-minded approach to making vodka,” Maybee says. “Most vodkas are quick to proclaim that they are 100-percent corn or whatever. Ours is a blend. If you mix the grains in a rye [whiskey], you get different flavors, and the same things happen in vodka — just to a lesser extent because it is more neutral. We also run it through a copper still, which gives it added texture and body.”

When asked if there was an ideal cocktail for the Rieger vodka, Maybee says there’s no one right way to drink it.

“I think that it’s good enough to be drunk on its own, on the rocks or with a squeeze of lime,” he says. “But it also works well in cocktails, you know, because it’s a neutral spirit. I don’t have a preference on how people are drinking it, as long as they’re enjoying it.”

The Midwestern Premium Vodka was launched on Monday, and Maybee adds that distribution is still in progress, but locals can pick it up at most places that carry the Rieger whiskey — namely, Gomer’s and Cellar Rat. And, Maybee adds, the vodka is not short on supply.

“This vodka is not exclusive,” he says. “It’s designed to be right around $20 a bottle. Just like the whiskey, we don’t want to price outselves where it’s considered an unobtainable product. We want bartenders to use it in their cocktails. We want people to feel like they can go pick up a second bottle. We want it to be approachable.”

Cellar Rat held a launch party for the vodka on Monday night, and I stopped in for a taste. Immediate reaction from a non-vodka drinker: I’d have that again. Smooth and round but with a bite, suggesting that some dry vermouth and a few blue-cheese-stuffed olives would serve it well.