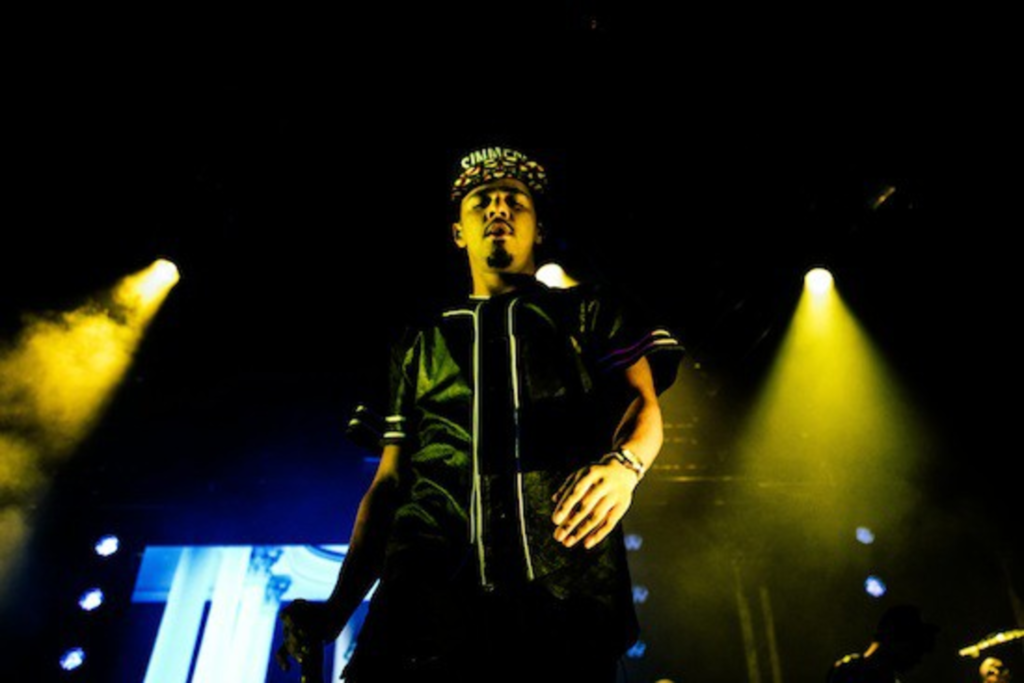 For weeks, basically ever since J. Cole debuted the song “Crooked Smile,” no one has been able to escape from it. It plays every three songs on the radio. That’s fine – it’s a great song. Solid flow, sing-along chorus (provided by TLC). Nice message. Easy to follow.

Nothing like J. Cole’s show last night at the Midland. 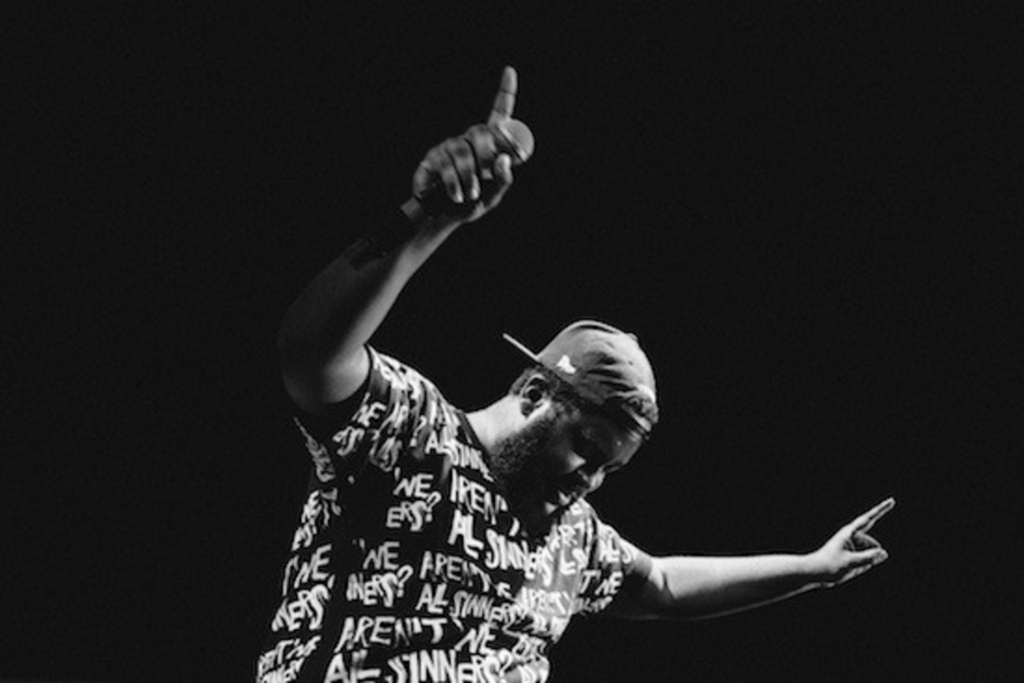 The night opened up with a short quarter-hour set from Bas, an up-and-coming New York-based rapper who is signed to Cole’s Dreamville label. Bas was energetic – even playful – and his set was all too brief. 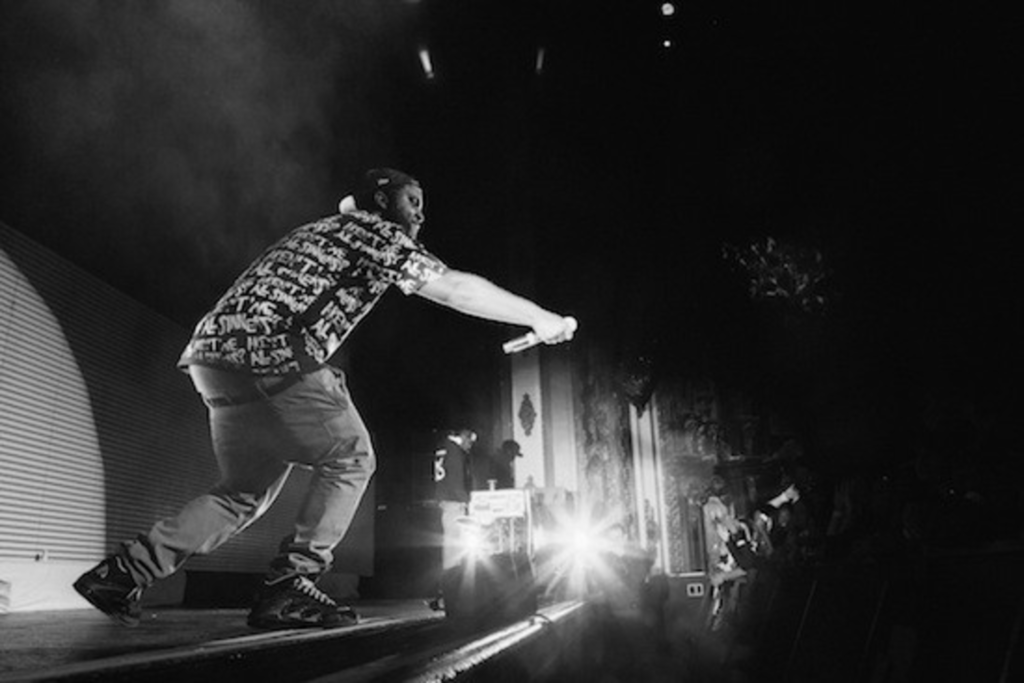 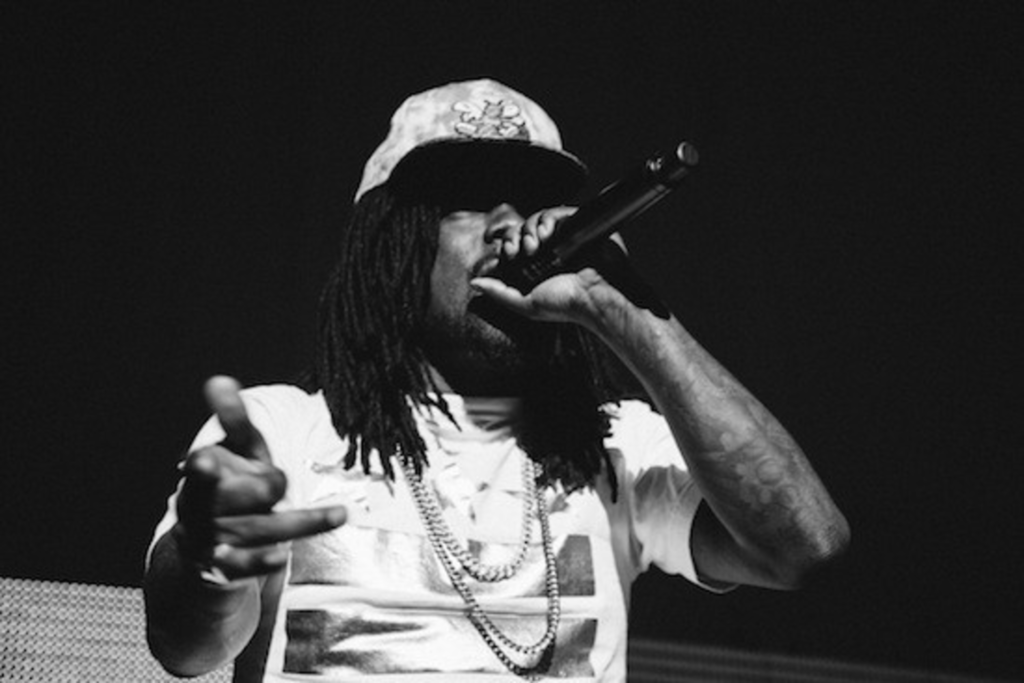 Wale was up next, and he delivered a nicely sized set (around 45 minutes) that featured crowd favorites like “Rotation,” which he dedicated to all those in the audience who liked to “smoke good and relax.” Then he lit a bong onstage, an act that was mirrored throughout the audience. Little clouds of thick smoke wafted up to the ceiling, curling and dissipating. 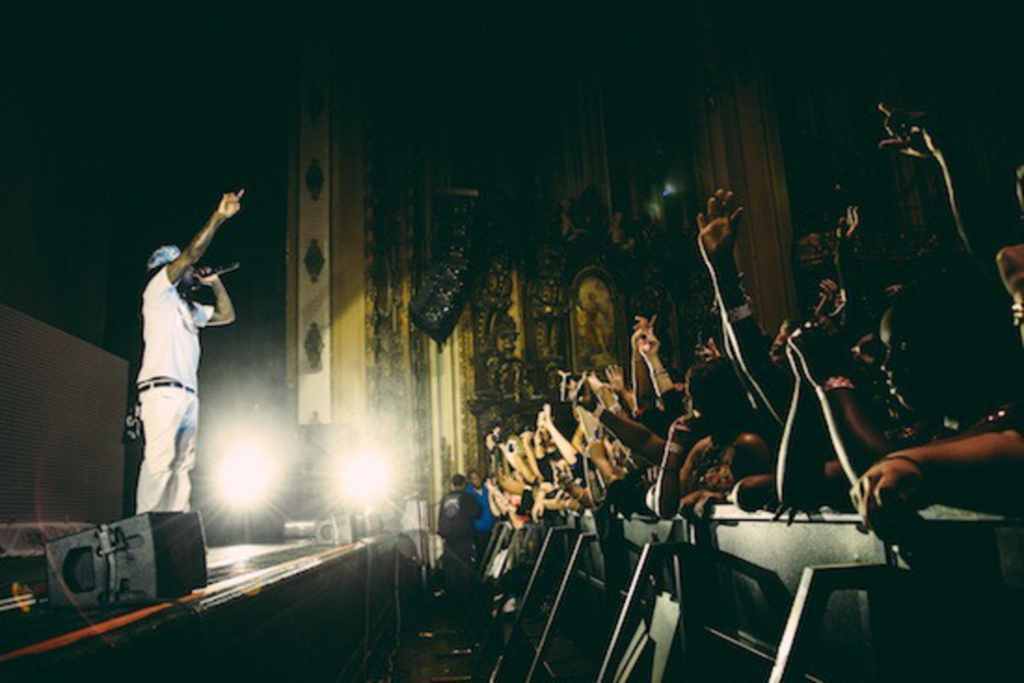 At one point, Wale decided it was time for a little one-on-hundreds interaction. Aided by a personal posse of serious-looking musclemen, Wale jumped down and waded through throngs of screaming girls, serenading fans with “Clappers” and “Pretty Girls.” Shortly after, he did some crowdsourcing for “two beautiful girls” to come onstage and dance with him while he performed “Diced Pineapples.” 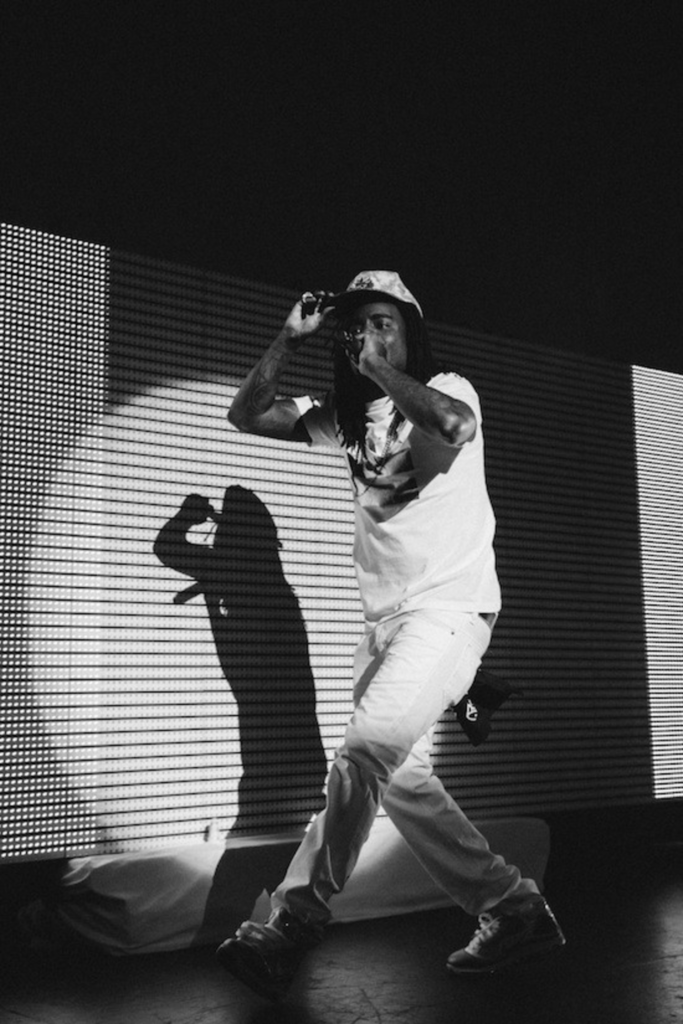 Approximately three days (or another 45 minutes) after Wale’s set ended, J. Cole took the stage. The digital backdrop that served as Wale’s stage setup was taken down to reveal a massive, tiered structure in which Cole’s backing band and two female backup singers were arranged. The group was perfectly still as a screen played a fake news broadcast, letting the audience know that J. Cole and his crew had been involved in a car accident, and survival was uncertain.
[page] 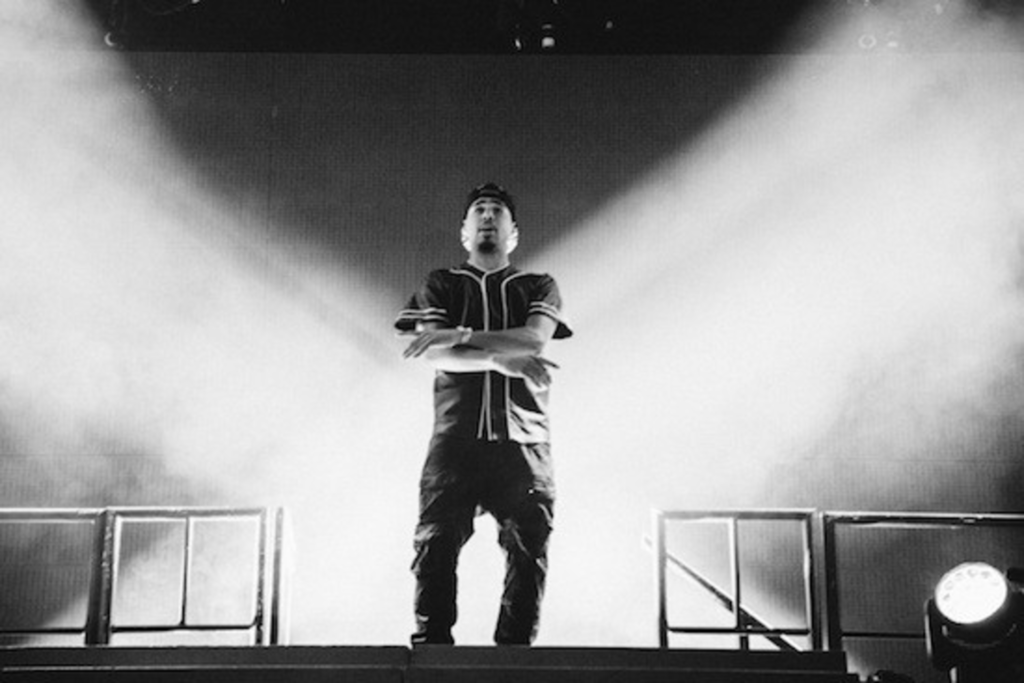 As the “developing story” clip ended, the screen morphed into a set of white pillars. Cole popped out by the display, on top of the white stairs that dominated the stage, and slowly made his way down them. Initially, this seemed to portray Cole as a sort of godlike figure, greeting the audience from the gates of heaven. As the show evolved, we learned that the loose storyline involving the “car crash” was somehow tied to the various scenes that Cole found himself in, which seemed to also suggest purgatory and hell.

Two songs in, J. Cole greeted the audience and announced that the evening was a “journey.”

“I’ve been doing shows for four years, but tonight is different,” he said. “When you feel like you’re on top of the fucking world, and you have everything you ever want, it’s funny how that shit can come crashing down before your very eyes.” 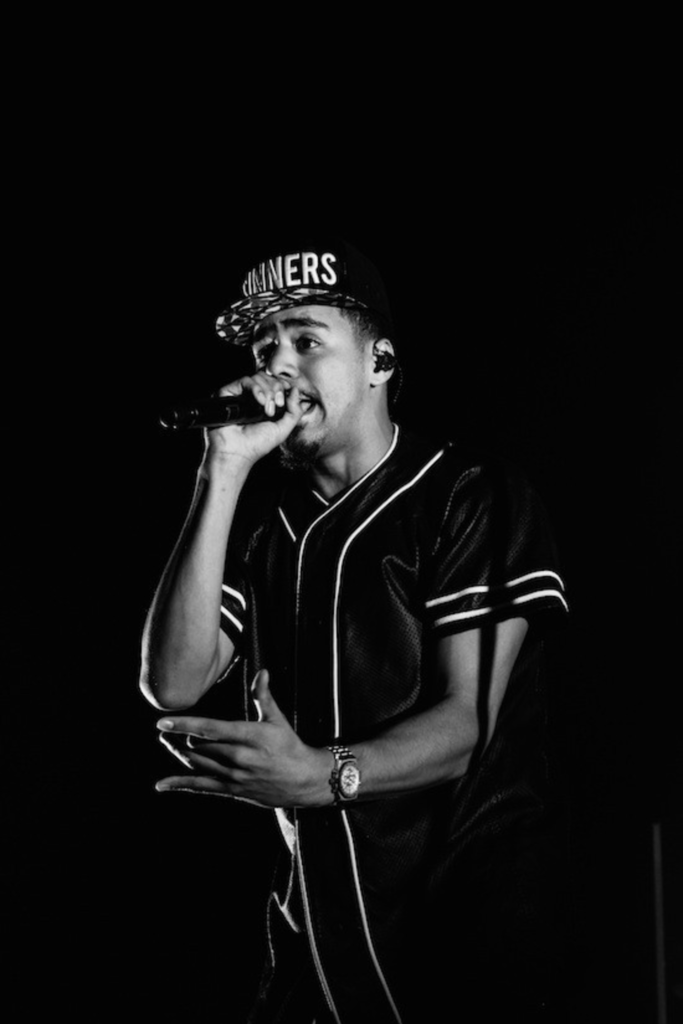 From there, Cole launched into “Blow Up,” which he dedicated to “the haters.” There was an epic electric guitar solo that seemed like it would be a better fit at an Aerosmith concert. Actually, there were plenty of electric guitar solos throughout Cole’s set, and they were all fairly beguiling. 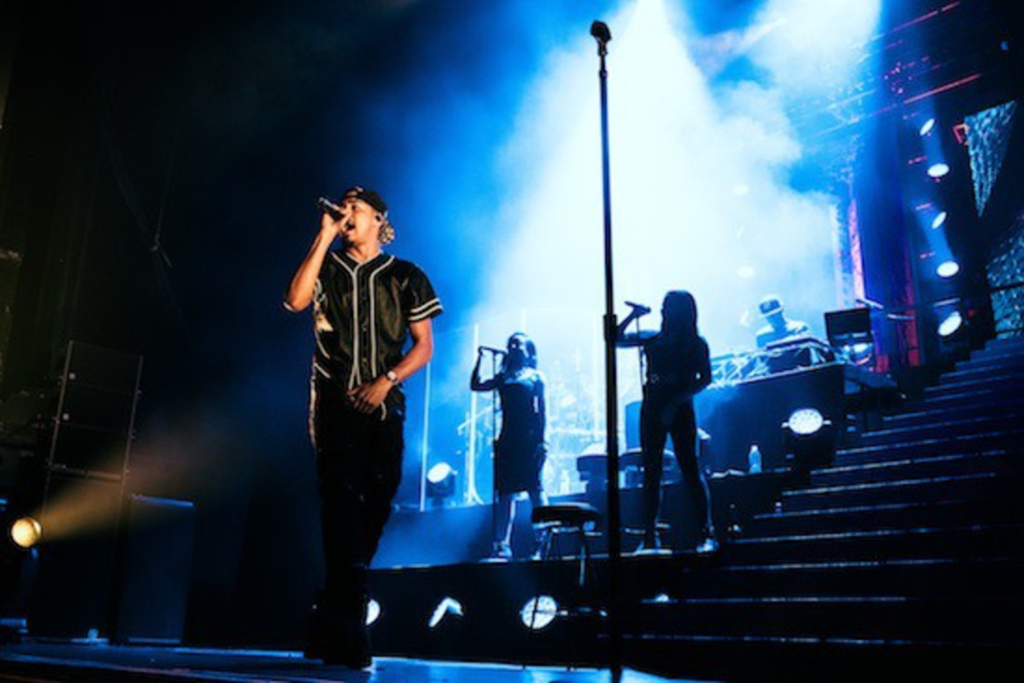 It was hard to tell if the crowd was into Cole’s set because they were actually enjoying it or because, by that point, most everyone in the front was higher than Cole’s steep ticket prices (around $50 a pop). Cole’s musical talents have been lauded, and he’s an excellent rapper, but the elaborate stage setup and extra features didn’t do him any favors last night. The rawness and the intensity that you can usually count on at a rap show were overshadowed by all the wobbly themes that Cole failed to really sync.

“There’s like a skull inside an apple,” Cole said at one point, referring to the display on the screen behind him. Presumably, this was part of his act for the night. “What the fuck is going on?” Not the greatest sentiment to have at your own show, really.

“This feels like a weird forensics skit from high school,” someone said behind me. 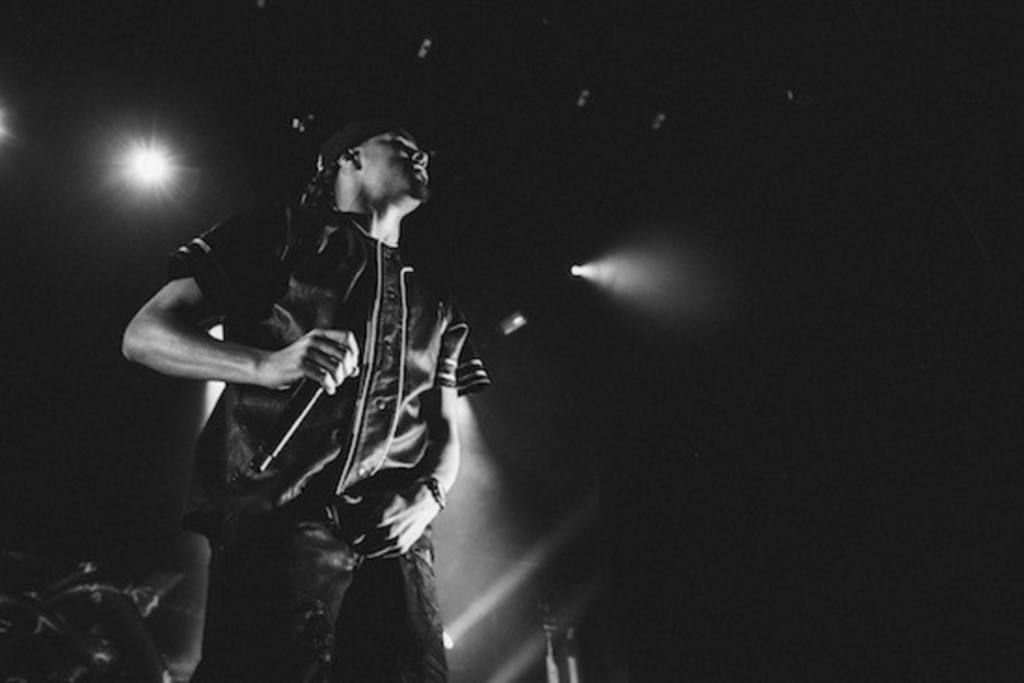 In the end, though, Cole’s “journey” was fairly inconclusive – heaven? hell? We shall never know – most of his fans didn’t seem to mind. Though by the end of the night, it’s doubtful that anyone would have minded much. 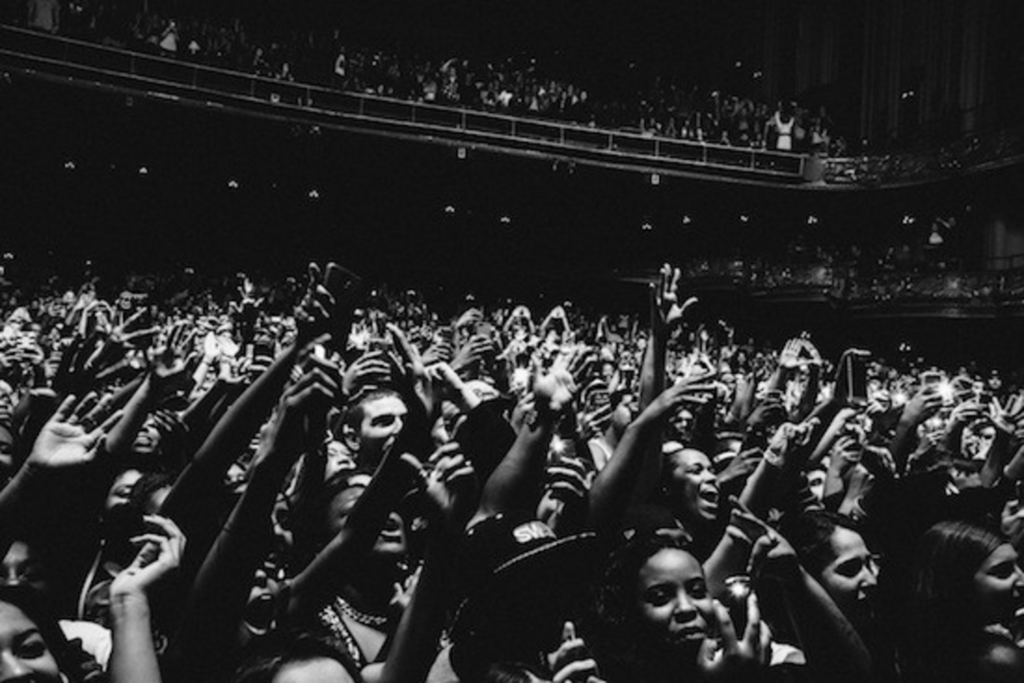