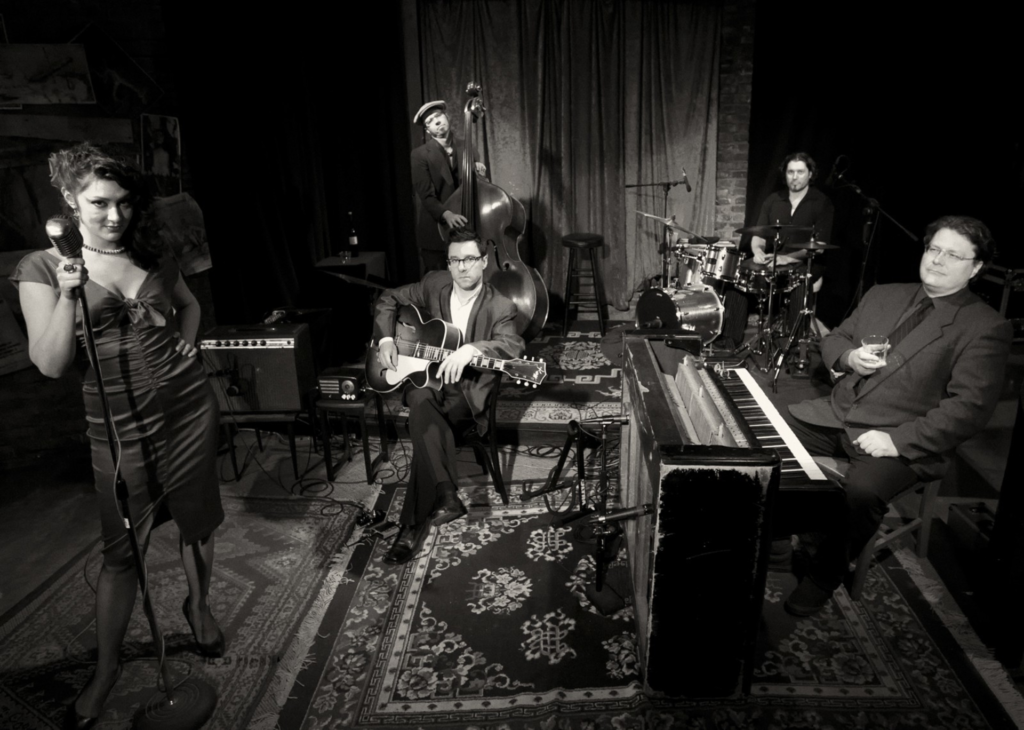 Across 318 square miles of Kansas City, six degrees of separation are three more than you need to make a connection. Three will get you the growing Oil Boiler collective, the latest example of what happens when nearly everyone in a vibrant, interconnected group of musicians, actors and artists turns out to know one another.

What is Oil Boiler, and who’s in it? Get your No. 2 pencils out, boys and girls. There may be a test on this later.

McGrane is better known as Ruby Falls, the saucy chanteuse of cabaret act Alacartoona. She also played George Clooney’s neighbor in last year’s Up in the Air. She does public-relations work for ArtsKC, the nonprofit organization that opened doors for Alacartoona’s first feature-length film, Night Is the Mirror.

Visual artist Tyson Schroeder created the haunting jacket design for the Night Is the Mirror DVD. (He also makes show posters for numerous other bands, earning him a Pitch “Best Of” citation this year.) Schroeder first brought the Oil Boiler concept to McGrane and her fellow Alacartoona founder Christian Hankel in January 2010.

“Tyson comes to us and says, ‘I have an idea for this play,'” Hankel recalls. “He didn’t even call it a play. He called it ‘this thing.'”

The “thing” shifted over the course of their discussions in January 2010. “It was going to be a chapbook story about a hit man and his stress-induced psychosis,” Schroeder says. “Then it was to be a comic book, then a movie, then five short performance pieces done in bars or street corners in a serial format. Erin and Christian came aboard and showed me the way.”

McGrane and Hankel helped Schroeder turn his idea into The Oil Boiler, a play set in the seedy underworld of the 1930s. The story: Neurotic hit man Leon Nesrac kills his lover and then faces a moral, philosophical and spiritual crisis.

The play’s dark, absurd themes proved to be rich enough to prompt an expansion, and the people involved up to that point comprised just the tip of an incest-pool iceberg.

“We decided to make it a collaborative project,” McGrane says. “We started bringing in people across different disciplines [and] started calling ourselves the Oil Boiler collective.”

“Each actor that came in started building up [the play], and it became deeper and more meaningful,” Hankel says.

Adding musicians and creative voices blurred the lines. The project was no longer just a play, and it wasn’t a band gig. Instead, it blossomed into a genre-bending spectacle, one that its makers say challenged the expectations of how a piece could be conveyed and experienced.

“The more the music developed and the more the story revealed itself, the more the two couldn’t be separated,” Schroeder says. “They grew together and sort of fleshed each other out.”

The show took over the Living Room, a Crossroads space, for a three-day run in May, transforming the venue into an assassin’s hideaway. The Living Room would later become a makeshift studio for recording the music from the play, arranged by Jeff Freling. (Connection alert: Freling used to play guitar in Mongol Beach Party — with Hankel on vocals — but now sits in on performances with John Hamil and Mark Lowrey, among others. That is, when he isn’t in Chicago, performing with the Blue Man Group.)

At first, it’s easy to understand how one might confuse the two. Taking a cue from the play’s scotch-swilling, suspender-snapping characters, the music is the kind of seductive, jazzy throwback that’s part of Alacartoona’s stage arsenal. The gentle swish of brushes on a snare and the easy throb of a bass blend with Hankel and Schroeder’s lyrics. Local jazz singer Shay Estes lends a heartbreaking yearning to “I Can Feel You” and “Beat My Heart.” Cody Wyoming’s gravelly vocals — invoking a young Tom Waits in “Not That It Matters” — press up sensually against Estes’ silky voice, like two lovers dancing alone under a spotlight. But they’re not alone, and the spotlight shifts constantly.

“The band’s up there playing, but people are actually interacting with the band,” Hankel says. “Who’s an actor and who’s a musician here?” Hankel adds, imitating an audience’s confusion. “The Oil Boiler breaks down all of those lines. It pushes the fourth wall to the back of the theater, so the audience is actually on the stage with you.”

The original-cast recording of The Oil Boiler was made live, relying on the expertise of Chris Meck, who does sound for Davey’s Uptown Ramblers Club. (Connection alert: Alacartoona performed its first bar show at Davey’s in 2003.)

Hankel credits Kansas City with making possible this kind of boundary blurring. With a supportive arts community behind them and what he calls a “concrete calling card” in the form of that CD — to be celebrated by a release party Friday, November 12, at the Living Room — the Oil Boiler collective sees more creative partnerships in its future.

Of course, more collaboration means further shrinking that incestuous little pool. For the Oil Boiler collective, and for the rest of Kansas City, that’s a good thing.