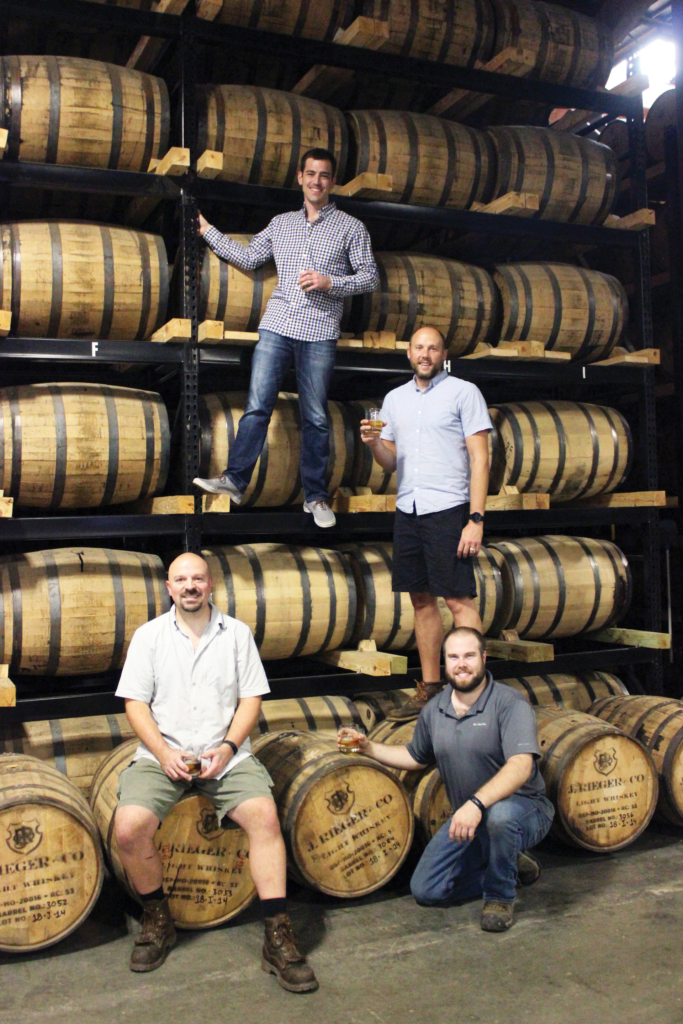 Kansas City has always been a drinking town, and the endless stream of illegal liquor that flowed through our streets during Prohibition cemented that reputation. Ironically, though, the debauchery of those days also effectively shuttered KC’s rich tradition of legal distilling. Some made it out alive: Holladay Distillery, founded in Weston, Missouri, in 1856, circumvented Prohibition laws by producing medicinal whiskey, and today, the company’s portfolio includes the gold medal-winning, eco-friendly 360 Vodka. But other historic distilleries were not so lucky: J. Rieger & Co., founded in 1887 in the West Bottoms, did not see a fourth decade.

But everything old eventually becomes new again. Hints of the area’s return to its liquor-producing glory days were detectable in 2010, when Union Horse Distilling Co. was founded in Lenexa, or 2013, when S.D. Strong Distilling arrived on the scene in Parkville. Then, in 2014, Manifesto’s Ryan Maybee and Andy Rieger — the great-great-great-grandson of J. Rieger founder Jacob Rieger — resuscitated the old distillery’s brand. They debuted with Rieger’s Kansas City Whiskey, a blended whiskey featuring a lick of aged sherry, and today the product line includes a Midwestern Dry Gin (developed under the guidance of Tom Nichols, former master distiller for Tanqueray), Midwestern Premium Vodka, and a Caffé Amaro coffee liqueur.

The J. Rieger & Co. line is now distributed in 17 states throughout the country — and the business is growing rapidly. In August, J. Rieger announced plans to renovate its 15,000-square-foot building in the East Bottoms and expand into the historic Heim Brewery bottling building, a historic, three-story, 45,000-square-foot space. By the time this ambitious, multi-million-dollar remodel is done (next spring, they say), it will boast daily tours, several bars, an event space, a Kansas City history exhibit, a gift shop — and an expansive production facility that includes four stills and five 2,500-gallon fermenting tanks. Whoa.

All that makes J. Rieger probably the biggest name in homegrown booze, but it’s far from the only new distiller. There’s Tom’s Town Distilling Co., whose opulent Crossroads bar is the perfect place to sip on Pendergast-era cocktails (go for its award-winning McElroy’s Corruption Gin); Restless Spirits, which has been pouring Irish-American whiskey and other products at its North Kansas City tasting room since 2016; Lifted Spirits, which opened in the Crossroads in 2016 and created Kansas City’s first traditional absinthe verte; and Mean Mule, a two-year-old label that crafts an agave spirit similar to tequila. Kansas City as craft distillery destination? We’ll cheers to that.