Is the artisanal Pop-Tart a trend worth toasting? 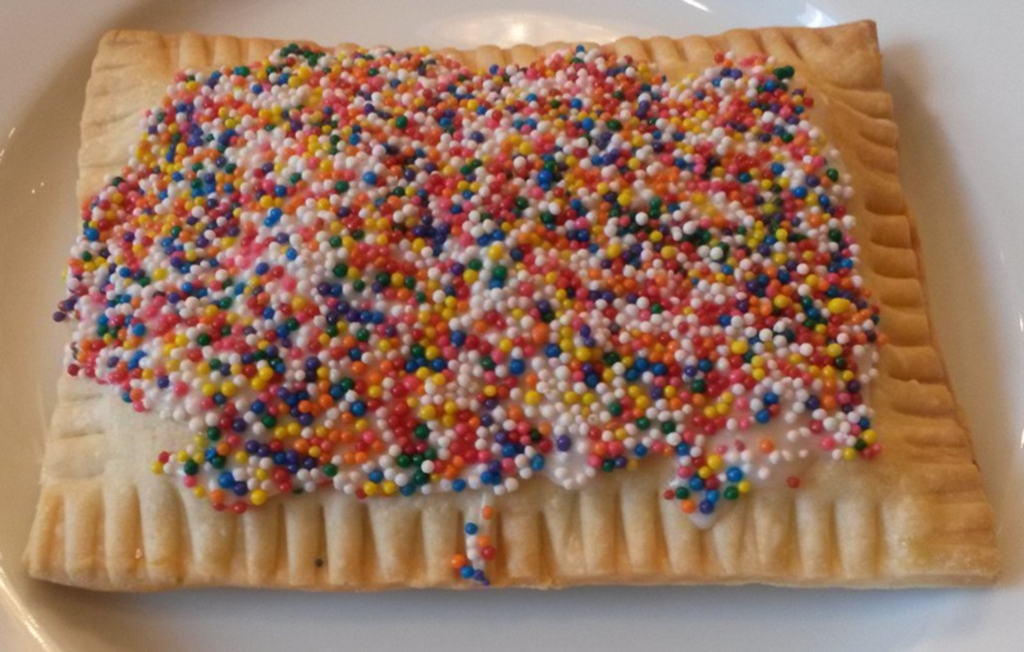 If you want to try one of Heirloom Bakery & Hearth’s homemade Pop-Tarts, you have to get up early.

I stopped by the almost maddeningly popular Brookside café on a recent afternoon hoping to savor one of the fruit-filled pocket pastries, only to stare at an empty platter. An employee told me that the breakfast sweets usually sell out by 9 a.m. (I call foul on overachievers causing a run on this classic slacker foodstuff. Who are you people?) I ordered a scone and slunk away.

The next morning, having vowed to rise with the dawn like a farmer, I slept through my alarm. I woke in a panic, pulled on the first outfit I could find and rushed out the door, muttering, “Pop-Tarts, Pop-Tarts, Pop-Tarts” all the way back to Heirloom.

I arrived at 7:10 a.m. A family of four followed me in at 7:11. I heard the kids behind me point out the Pop-Tarts to one another. “I’m getting one of those,” the boy said. “Ooh, me, too,” the girl echoed. Reader, I deprived those children. When it was my turn to order, I did not hesitate to ask for the last two tarts. Hey, I’d set my alarm. (I did ease my greed-crippled conscience by asking whether more tarts were on the way; yes, I was told, there were.)

Heirloom’s pastry chefs aren’t the only ones in Kansas City revamping the childhood treats. Sasha’s Baking Co. and 8-Bit Bakery (which sells its stuff at Green Room Burgers & Beer) also make versions of the Pop-Tart.

But it was Natasha’s Mulberry & Mott that set me on this journey. I had noticed a sudden proliferation of “Mott tarts” on the 10-year-old bakery’s Facebook page — along with the admonition that its reimagining of the Kellogg’s goody had come first in this market. The shop made this point by posting a dated screenshot, establishing that we could have been eating Mott tarts whenever we wanted for two whole years. (Also, we wouldn’t have had to get up with the roosters to do it; Natasha’s opens at 10 a.m. weekdays, 9 a.m. Saturdays and noon Sundays.)

Clearly, a blueberry-filled gauntlet had been thrown down. But let’s not fight, you guys. No, let’s all make like sugary fruit filling and warm, flaky crust and hug it out. There really can’t be too many artisanal Pop-Tarts in one town, can there?

That’s a purely rhetorical question, but I ate all the local ones anyway, just to make sure — sharing them with my Pitch colleagues. This is what we found.

Natasha’s: The Mott tart appeared very similar to a Kellogg’s Pop-Tart, with a crisp-looking crust and a simple swath of frosting and sprinkles. Depending on the flavor, the frosting colors range from basic white to electric blue.

Heirloom: This tart appeared softer and flakier — more like a pie pocket, as one taster observed. “It looks inviting,” he added. He also said it looked as though a 3-year-old had applied the frosting, which added to its charm.

8-Bit: Plucked from the small pastry case on the bar at Green Room, this tart looked somewhat wilted. The colors of the sprinkles had begun to bleed into one another, like a reflection of Christmas lights in a wet window.

Sasha’s: The crisp, agreeable-looking tart had a thick schmear of white frosting topped with a beautiful constellation of rainbow sprinkles. I immediately posted a photo to Instagram.

Natasha’s: This pastry pocket tasted like the crispy edge of the piecrust that hugs the side of the pan — and damn, do I love piecrust.

8-Bit: Much like Heirloom’s, this tart’s crust was more reminiscent of a Toaster Strudel than a Pop-Tart.

Sasha’s: The crust struck just the right balance between crispy and flaky, like a regular old toaster pastry with center-of-the-pie aspirations.

Natasha’s: The berry-flavored center was fruity and pleasingly tart, but a bit more filling wouldn’t have hurt.

Heirloom’s: One taster said the blueberry filling seemed “more real,” possibly due to the presence of actual fruit chunks.

8-Bit: This tart tasted better than it looked. The strawberry-balsamic flavor delivered a pleasantly sweet-and-savory dynamic. Other flavors include caramel-bacon and brown-sugar-cinnamon.

Sasha’s: The sweet, plentiful strawberry filling contained large fruit chunks and was so delicious that I could’ve eaten two. It’s good that I resisted because this pastry is big enough to share — but trust me, you won’t want to.

Natasha’s: The macarons, which are available in all the colors of the rainbow, as well as flavors such as Cap’n Crunch and brownie batter.

Heirloom: Try one of the scones. The strawberry-mint-chia is delightful.

8-Bit: Treat the Pop-Tart as an unorthodox complement to one of Green Room’s chocolate-flavored stouts.

Sasha’s: Go ahead and get the Pop-Tart. It tastes exactly as its appearance leads you to hope.