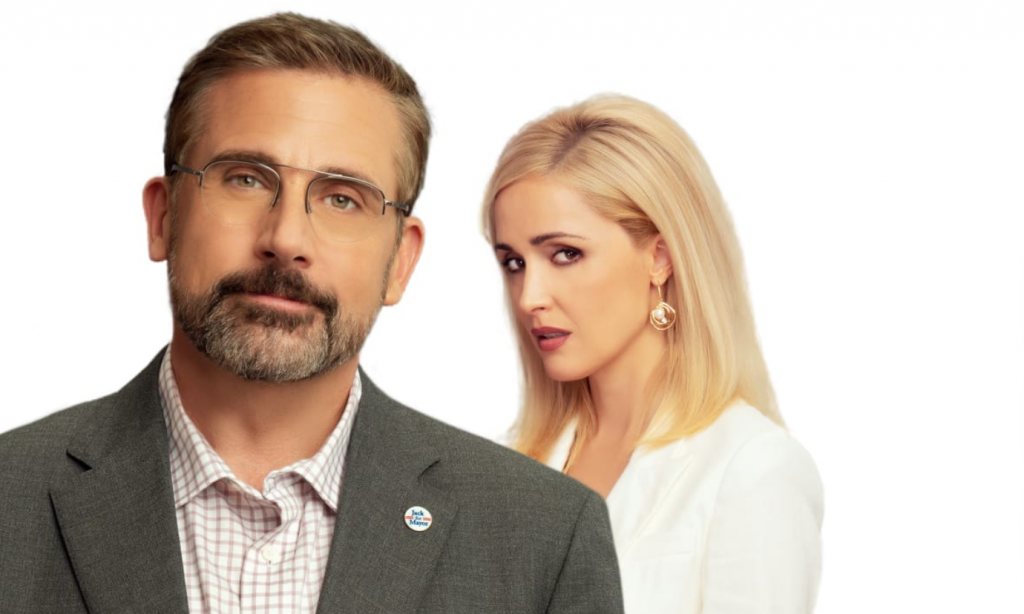 There are multiple generations of folks who miss Jon Stewart. His decades on The Daily Show are what taught me my foundations in politics, as is true for many of my peers. Like hiding medicine inside a dog’s food, he hid a political education inside dick jokes, and at some point, the audience found itself dedication, in a time when no one was seeking education.

Since 2016, we’ve lived in a constant civics lesson. Each day raises new questions about the foundation of laws, the principles by which our government operates, and what counts as a violation of norms. It’s a time when it would feel good to have Jon Stewart back, because in a world of both-sidesism, someone speaking truth to power is not only necessary but would be emotionally rewarding.

Jon Stewart has written and directed a movie about politics. Each line of dialogue feels like it belongs to Jon Stewart. But it has missed the political window where it could have delivered something important. It’s off by years. And that’s a disappointment.

Irresistible is the tale of Democratic political consultant (Steve Carell) who catches a viral video of a retired Marine colonel (Chris Cooper) speaking truth to power in a city council meeting within a small Wisconsin town. Carell sees political opportunity in Cooper, and flies out to convince him to run for mayor. When challenged on the idea that this Wisconsin vet might not see eye-to-eye with Carell, he insists “He’s a Democrat, he just doesn’t know it yet.”

What follows is a journey into a small Wisconsin town where a liberal coastal elite attempt to befriend and enlist the aide of a community that shares no beliefs with him; or maybe they do and are just too polarized by the modern world to agree on what is in everyone’s best interests. This small-town mayoral race becomes seen as something of a referendum on the political temperature of the country as a whole, and soon a Republican strategist has entered the market (Rose Byrne) playing the opposite but equal role to her long-time competitor in Carell.

This setting and plot (small election reflections on the national stage so big money becomes involved) has been done dozens of times across films like Welcome To Mooseport and The Campaign. Vague small town discourse nostalgia doesn’t fit with the modern political landscape. That said, neither would a direct satire of the current administration, a la Primary Colors. The truth is that for a political satire feature film, it is nearly impossible for a year+ long production to have foreseen the place we’d be in now.

(The exception to this is last year’s Long Shot, in which the audience must ask if a leaked video of Seth Rogen jerking-off should tank the political campaign of Charlize Theron. It’s an annoyingly good political movie and I cannot recommend it highly enough.)

The paint-by-number political story churned out across Irresistible is serviceable enough. The film is carried almost entirely by the jokes and line delivery of Carell and Byrne. It is fine. It is a comedy that works mostly, and will almost certainly benefit from skipping a theatrical release, heading directly to VOD this week.

Two years ago, perhaps the message of “perhaps it is the fault of the media” or “there are good people on both sides” would have found a stronger landing spot. If you’ve followed the Black Lives Matter movement in recent weeks, perhaps you’ve seen the negative reaction to the 8Can’tWait campaign. Designed to offer 8 simple guidelines that data proved would help reduce police violence, it was in the works for several years, but was released in a time where incremental change was determined to be a betrayal when revolutionary change was the order of the day. Irresistible falls into a similar space. It wants to convince you that there are half-measures to be taken, at a time when no one wants to take half-measures, because the world is literally burning around us. No one has taken half-measures with us, and limiting the scope of change to what is “acceptable” has no place in 2020.

The previous “Left” has become centrism and the new Left has become a demand for progress and anyone turning centrism into entertainment is not being the ally that any of us need. It is a shame to see a much-needed voice so thoroughly wasted, albeit not by anything beyond shit timing.

Will Sasso plays a perfect Midwestern bar drinking buddy. I liked that. More Will Sasso please.

Starting on June 26th, you can watch the film at any of these locations.