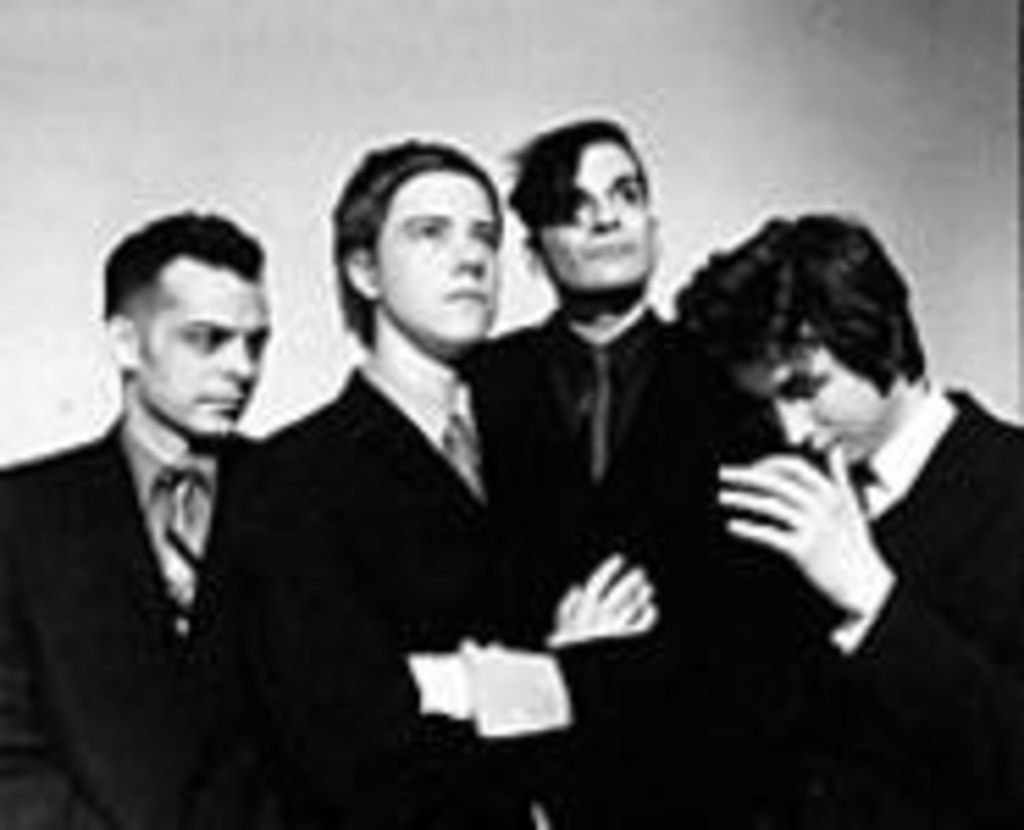 When New York’s Interpol formed back in 1998, the band members knew little about one another. Daniel Kessler met Carlos Dengler in class at New York University and invited him over to play music. When Kessler ran into a casual acquaintance named Paul Banks, he asked him if he’d like to sing in the new band — without knowing whether Banks could carry a tune. So how did the band that produced one of 2002’s most cohesive albums get through its awkward getting-to-know-you phase?

“We had retreats, where we’d go to parks and say, ‘Paul, catch Carlos when he falls!'” Kessler says sarcastically. “It could have gone very much wrong in the beginning. We didn’t even know if we liked the same music or if we clicked as people.”

By contrast, the public’s introduction to Interpol went like a blind date with a mysterious stranger on which both parties got along fabulously. Though the quartet — vocalist and guitarist Banks, bassist Dengler, guitarist Kessler, and drummer Sam Fogarino — lurked in the shadows of the New York music scene for four years before releasing an album, most listeners didn’t discover Interpol until the August release of its first full-length, Turn On the Bright Lights. In a mere five months, this record earned enough acclaim to land it on countless critics’ year-end lists and enough sales buzz to launch it onto Billboard‘s Heatseekers and Independent Albums charts. What’s most remarkable about Interpol’s fame, though, is that it wasn’t propelled by a contrived look or a lot of hype. Interpol merely released an album that enthralled a whole bunch of the right people.

Turn On the Bright Lights is a miasma of fragile pop that’s just as catchy as it is ominous. Vast and somber, Bright Lights teeters on the edge of depression but turns that anxious energy into something danceable. And Banks, it turns out, is a phenomenal vocalist, delivering lines such as I’m gonna hold your face and toast the snow that fell/Because friends don’t waste wine when there’s words to sell in a low, pained tone.

The album’s brooding British vibe, not to mention its musical nods to everyone from Joy Division to Echo and the Bunnymen, owes quite a bit to Kessler’s and Banks’ early years. Both musicians (who will identify their ages only as “twentysomething”) were born in England and lived there throughout their early childhoods. Kessler, whose fast-paced but genteel manner of speaking suggests a Continental upbringing, lived in France until he was eleven. He later returned to Paris for a college study-abroad program. That’s when he first met Banks, whose dirty blond hair and juvenile features do nothing to betray his deep-diving, wavering vocals.

But unlike many of their British forebears, Interpol couldn’t take up residence in some English countryside estate when it came time to record. Instead, the band chose the next best thing for New York City dwellers: a secluded house in rural Connecticut where Peter Katis (known for his work with Mercury Rev) runs a studio. Interpol recorded the album in just ten days in November 2001, working and living in one place and rarely seeing the light of day. That sleep-deprived intensity lends Bright Lights its welcome tension.

“I became pretty obsessed, because the studio is right in the attic and you’re tempted to work such long hours,” Kessler says. “All my dreams were about recording and turning knobs. I didn’t leave the house for nine days, and I saw the sunlight just through the sunroof in the attic.”

When Bright Lights emerged from its countryside seclusion last fall, underground and then mainstream magazines were there to greet it enthusiastically. To most music fans, it seemed Interpol had appeared from nowhere, an illusion that was partly of the band’s making.

“We decided we’d do interviews only when we had a record to talk about,” Kessler says. “We’re working for an independent label [Matador]. It’s not a hype machine. I think [the praise was] just a reaction from people liking the record.”

It wasn’t too long ago that most of the attention Interpol attracted was accidental. More than once, the band received e-mails from people attempting to contact the actual Interpol — that is, the international crime-fighting organization.

“We’d get people e-mailing us some serious claims, and I’m just thinking, do you really think the real Interpol would have a free e-mail account?” Kessler recalls. “We’d write back and say, ‘Hey, we’re just a band. We can’t help you.'”

Now, anyone who’s aware of Interpol the band seems ready to lump them into the New York City scene along with the Strokes, the Yeah Yeah Yeahs and the Liars. Although the band owes some of its success to the fact that trend watchers seem to be looking toward New York with newfound intensity, Interpol doesn’t feel much kinship with its NYC brethren.

“It’s not a scene in the traditional sense,” says Kessler, whose baby face and shaggy hair lend him a refreshingly unaffected look. “You’ve got to be wary of scenes anyway.”

Since the release of Bright Lights, Interpol has been touring nearly nonstop, playing everywhere from the biggest clubs in some cities to underground gems in others. Though Interpol gets mostly high marks for its live shows, which tend to replicate the record’s swirling collages, a recent nerve-wracked appearance on The Late Show with David Letterman suggests that the band is still somewhat blindsided by its new visibility. The touring schedule has been so rigorous, in fact, that Kessler says Interpol has hardly had time to stop and absorb its rapid rise.

“We’ve been on the road so much that it doesn’t feel very different,” Kessler says. “The greatest change is that when we’re playing shows, people have started mouthing the words or clapping already when we start a song. We take it very much in stride.”