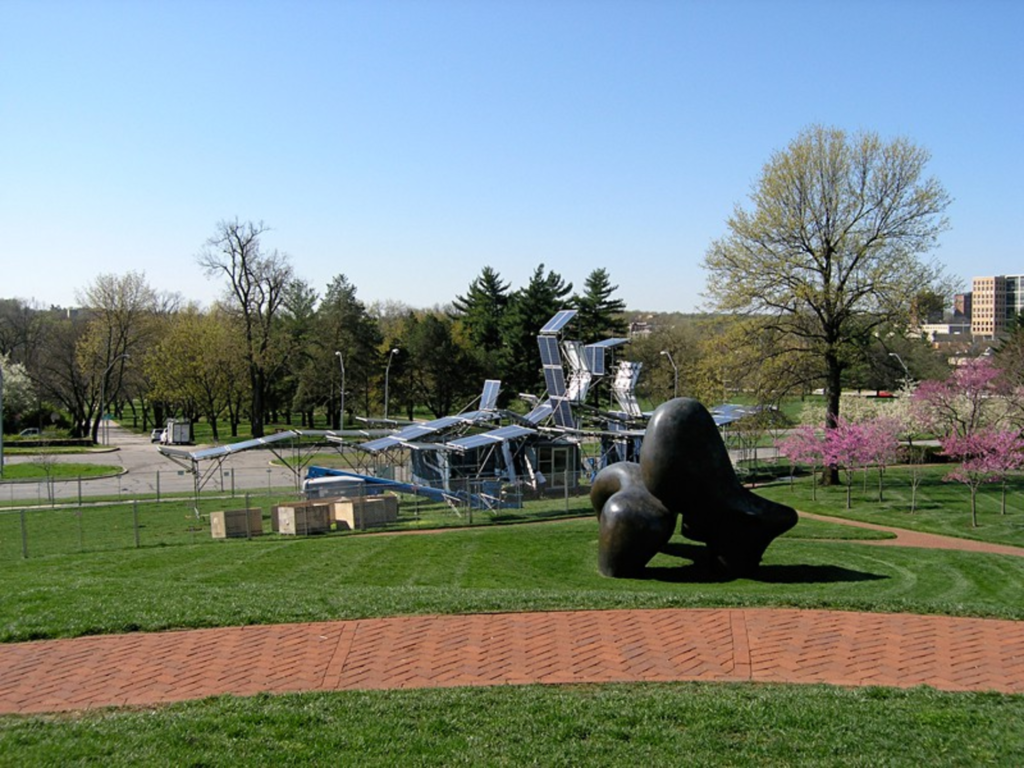 The World’s Fair was the original trade show — one that sold the future. At each, manufacturers from around the globe came together to demonstrate new technologies, display advances in expertise and cultivate consumer interest. The idea: Evoke in every observer a dazzled, covetous awe.

There’s a lot to covet in the Nelson-Atkins Museum of Art’s new exhibition, Inventing the Modern World: Decorative Arts at the World’s Fairs, 1851-1939. The show, which opens Saturday, April 14, glistens with lavish, often over-the-top objects of exquisite design, rich materials and impeccable execution.

Among the remarkable pieces: delicate pendant earrings from 1820, made of iron wire; a gold-and-mosaic bracelet, from around 1860, that used then-modern technology to mimic 1st-century Roman work; a blinding, all-silver, Rococo-style dressing table and stool from 1899. There’s a gorgeous 1915 Japanese screen —called “Morning Sea” — woven with 250 shades of silk threads, which shimmer as you move by it, making the waves come alive.

Curators Catherine Futter and Jason Busch — funded by a research grant from the National Endowment for the Arts — combed the contemporary world’s collections for the finest examples of technique and design that were groundbreaking when the objects were made. But they haven’t assembled a show that’s merely instructive, a simple history of gold-prize winners. Futter (the Nelson-Atkins curator of decorative arts) and Busch (of the Carnegie Museum of Art in Pittsburgh) instead concentrate on themes of innovation, discovery, and the tension between cross-cultural sharing and nationalistic innovation.

“We let the objects tell the story and direct the themes,” Futter says.

The space offers room for the objects to work as Futter suggests. The Bloch Building’s tall ceilings and sprawling layout of platforms and cases recall London’s huge Crystal Palace, which housed the Great Exhibition of the Works of Industry of All Nations, which drew 6.2 million people in 1851. Trying to digest the 189 sets of marvels in a single visit would be overwhelming; engaging closely with a smaller number of the chosen works is the way to go. And there’s time. Inventing the Modern World stays up through August 19. (The exhibition travels to the Carnegie in October, then next year to the New Orleans Museum of Art and to the Mint Museum in Charlotte, North Carolina.)

Presented chronologically and culled from thousands of specimens, the furniture, glassware, vases and tapestries brim with roiling colors, patterns and textures — often all in a single object. A Fukagawa Yeizaemon vase, for example (originally displayed at the 1876 Centennial International Exhibition in Philadelphia), is topped by a puzzle of pink and green hexagons on glazed and enameled porcelain. But the scenes depicted on the front — battling samurai against a background of blooming cherry trees and framed by two dragons — are gaudily un-Japanese.

“This was made for the Western market,” Futter explains. “The Japanese would never use pink and purple.”

In one of the exhibition’s examples of cultural cross-fertilization, this Western interpretation of Japanese design also employs a chemical glazing technique that was imparted to the Japanese in 1870 by Gottfried Wagner, a German chemist who was invited to Arita, the great ceramics center in Japan.

And then there are this exhibit’s 29 pieces of jewelry.

Paulding Farnham’s jeweled iris, almost life-sized at 3 inches across, rests delicately on an elegant curved stem of gold. The platinum petals are paved with sparkling sapphires, diamonds, garnets and topaz. The 1900 Tiffany & Co. Iris Corsage Ornament (it belongs to the Walters Art Museum in Baltimore, which also has one of Farnham’s original design sketches) won a gold medal at Paris’ Exposition Universelle — when America was still thought to lag behind Europe’s cultural perfection. (Farnham used American gemstones in his exhibition pieces — in this case, sapphires from Montana.)

In keeping with the World’s Fair tradition of innovation, there are a few interactive, high-tech components to Inventing the Modern World. At a virtual jewelry counter, you can see yourself wearing a Fabergé tiara: a single sheet of platinum cut into patterns resembling Russian folk lacework and bedecked with diamonds. A stereoscope station shows scenes from the fairs themselves, and a display of interactive screens allows you to flip, turn and examine select objects.

World’s Fairs were intentionally temporary, and their great, expensively built structures were demolished, with a few exceptions: the Eiffel Tower and the Palace of Fine Arts, which is still the home of the St. Louis Art Museum. In that spirit is this exhibition’s Sun Pavilion, which hugs 47th Street like a giant satellite at the edge of the museum grounds. Generator Studios’ temporary structure, chosen from an open-call contest’s 15 entries, is open during museum hours.

“The pavilion,” Futter explains, “inverts what we see with all the gadgets we use every day — an exploded iPad: three shipping containers, scaffolding and solar panels.” In one container, she explains, furniture dropped off by the community is broken down by local volunteer artists and Kansas City Art Institute students, for rebuilding as new art. In another, 150 solar panels collect power to run an air conditioner.

The decorative arts are often the only surviving elements of the dozens of World’s Fair expos showcased in this exhibition. Seeing these objects — rather than souvenirs or postcards or architectural remnants — feels like a gift to us, the descendants of ambitious people who saw the world and its resources as theirs for the taking. Unlike so many of today’s industrial barons, they did so in the spirit of innovation and, in the words of Robert Green Ingersoll, writing in The Illustrated World’s Fair in advance of the 1893 World’s Columbian Exposition in Chicago, “for the intellectual, mechanical, artistic, political and social advancement of the world.” That spirit lingers here, where you wonder what Ingersoll and those who shared his optimism would say about the world as it is now.