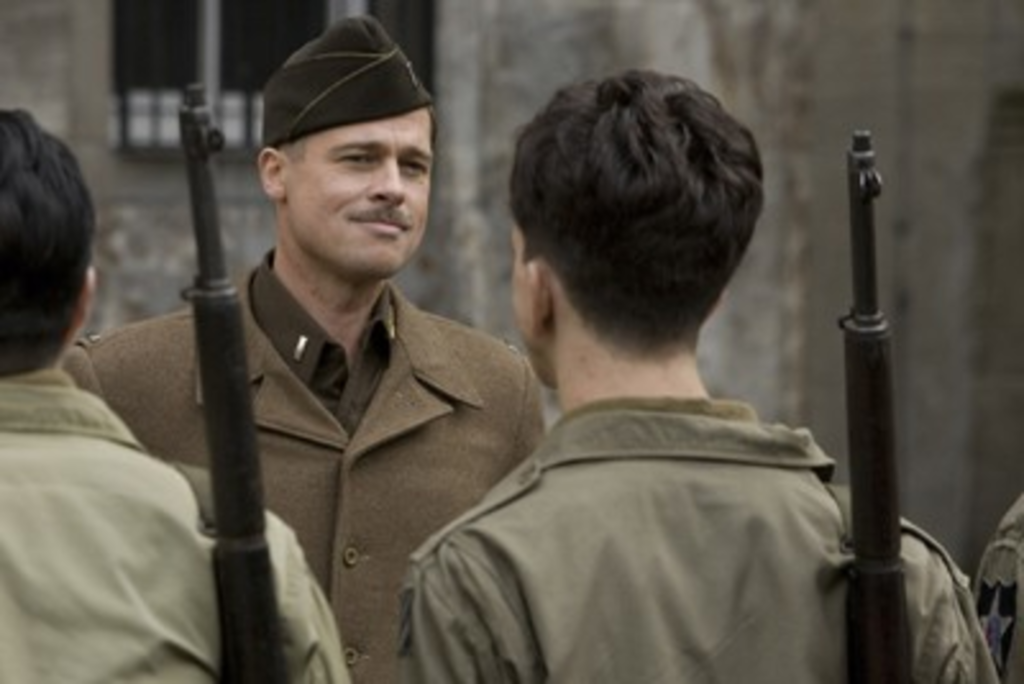 It’s also quintessential Tarantino — even more drenched in film references than in gore. Tepidly received in Cannes and thereafter tweaked, Inglourious Basterds may still be a tad long at two and a half hours and a little too pleased with itself, but it’s tough to resist the enthusiastic performances and terrific dialogue, if you’re not put off by the juvenile premise or cartoonish savagery.

Inglourious Basterds is something sui generis — a two-fisted Hollywood occupation romance, in which a Jewish special unit wreaks vengeance on the Nazis. It also has the best Western opener in decades: The first of five chapters nods to Sergio Leone with the title “Once Upon a Time in Nazi-Occupied France” and to the genre in general with a shot of a French farm family hanging their laundry as a Nazi convoy approaches in the distance like a Comanche band. Violence is not immediately forthcoming — Inglourious Basterds is as much talk-talk as bang-bang.

The first of a half-dozen one-on-one verbal jousts pits a taciturn, salt-of-the-earth peasant against a loquacious Nazi colonel, Hans Landa (Christoph Waltz), who, humorously officious, hypnotizes his prey with a twinkling eye, giant grin and steady stream of civilized chatter. Landa, the SS functionary assigned to rid France of Jews, is not only the movie’s villain but also its master of revels. His elegant and clever SS man is the movie’s most crowd-pleasing creation — another in the long line of glamorous Hollywood Nazis. He’s also a European sissy whose “barbaric” antagonists are a squad of Jewish American commandos led by wily hillbilly Aldo Raine (Brad Pitt). The Jews are out for blood, and Raine promises his eponymous Basterds that, under his leadership, they will terrorize the Germans with “Apache tactics,” demanding only that each contribute 100 Nazi scalps.

Given its subject and director’s track record, Inglourious Basterds has less mayhem than one might expect. It is essentially conceptual and, as with any Western, all about determining the nature of permissible aggression. Operating like a cross between the Dirty Dozen and a Nazi death squad, the Basterds take no prisoners — designated “survivors” are shipped back to Germany, swastikas carved in their foreheads to spook the brass. The rest are sent to Valhalla, most spectacularly by Sgt. Donny Donowitz (exploitation director Eli Roth), who uses a Louisville slugger to bash German brains. “Watching Donny beat Nazis to death is as close as we get to the movies,” one of the Basterds exults, tipping Tarantino’s hand.

The heroine of, and most artificial construct in, Inglourious Basterds is Shosanna Dreyfus (Mélanie Laurent), Jewish survivor of a Nazi massacre, hiding in plain sight as the proprietress of a Paris movie theater. Shosanna articulates Tarantino’s own cinephile credo: His characters live and die in (and sometimes at) the movies, and only there. In a sense, Inglourious Basterds is a form of science fiction. Everything unfolds in and maps an alternate universe: the movies. Even Shosanna’s Parisian neighborhood has a marked resemblance to a Cannes back alley. Inflammable nitrate film is a secret weapon. Goebbels is an evil producer; the German war hero who pursues Shosanna has (like America’s real-life Audie Murphy) become a movie star. Operation Kino not only depends on Shosanna’s movie house and the German movie diva’s complicity but also on a heroic film critic (!), played by Michael Fassbender.

Inglourious Basterds is hardly the first movie to place World War II in the context of American show business. Basterds‘ coarse, ranting, ridiculously caped Hitler certainly contributes to making the war vaudevillian, but Tarantino’s particular genius has been to provide a suitably regressive scenario for the sandbox war that cost 50 million lives.

The Producers might seem an obvious precursor, but there’s a difference between victim and victor mocking Hitler. Where the Mel Brooks scenario involves dancing on the monster’s grave, the Tarantino scenario is less cathartic than bizarrely triumphalist. Inglorious Basterds basically enables Jews to act like Nazis, engaging in coldblooded massacres and mass incineration, pushing wish fulfillment to a near psychotic break with reality. If masterpiece is taken to mean the fullest expression of a particular artist’s worldview, Basterds could well be Tarantino’s.