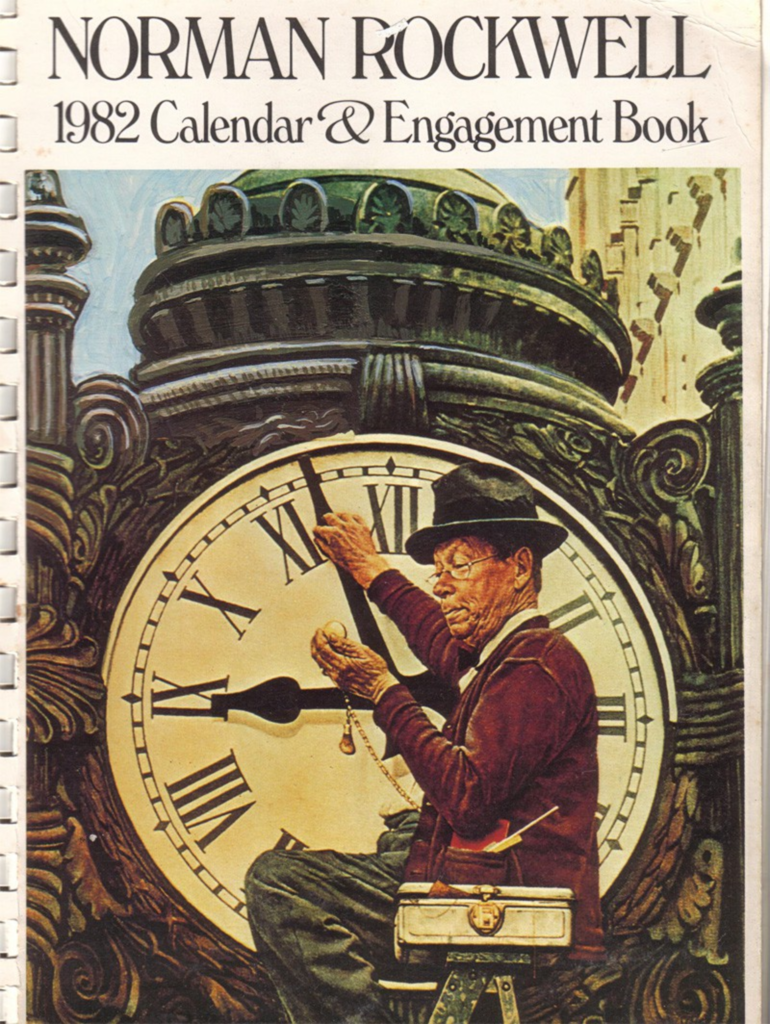 Out of college, living with her moody friend BB, working full time at a hotel, worrying over her weight, wishing that she’d had a date to squire her to Neil Diamond, our Ms. Rockwell has, by the fall of 1982, come to feel dissatisfied. (Read our two earlier stories about this anonymous diarist here and here.) Most days, she jogs miles along Ward Parkway or through Loose Park, but she still shouts at herself, in print, about eating too much and her need to lose those last five pounds. (Her goal is 112; her reality, noted in almost every entry, is about 117.) On September 22, three days after participating in the Rax Roast Beef Run, she starts a new diet, the first of four that she’ll try before journal’s end.

In October, for her birthday, she receives diamond earrings and an exercise bike from her parents. She exults, “Dinner at home — crab casserole YUM! Asparagus rolls, cake roll. Feel so fat but it’s my b-day!” Soon, she’s riding up to 10 miles a day in addition to her jogging.

Birthday bliss doesn’t linger. The next morning, a Monday, she writes, “Alarm went off at 7 — really 6:15 — BB played trick.” This cruel prank is only the latest trouble with BB. Although they cheer together for the Cardinals to beat the Brewers in the World Series, and they make pumpkin costumes to wear to a Halloween party, Ms. Rockwell often writes pained notes like “BB quiet — did I do something?” or “BB gets on my nerves — but I try to be nice.”

As always, she packs her days — and her pages — with vintage Kansas City. As the year winds down, she eats, shops or drinks at Swenson’s, Winstead’s, Pryde’s, Border Bandido, Village Inn, the Indian Hills Country Club, the Copper Oven, “the card shop on Main,” Halls, Lee Wards, Wolferman’s, the Plaza Art Fair, Fuzzy’s, Footlights, Quality Jewelry, Houlihan’s (“so good!”), Mister Guy (for shoes), Oak Park Mall (for ear piercing), Hardee’s (for biscuits) and QuikTrip (for the sweets she keeps swearing off).

As she dutifully gets fitted for bridesmaid dresses for friends’ weddings, the major success in Ms. Rockwell’s life comes at work. On Friday, September 10, she dishes big news: “Got promotion to personnel director! Yea! Now a raise!” She won’t assume the position until just after New Year’s. In the interim, our Ms. Rockwell will suffer that all-American phenomenon: a love-hate relationship with work.

She toils in personnel, often overwhelmed by the Monday payroll, and on some weekends and evenings she picks up banquet catering shifts. She enjoys the extra money and exercise, but she increasingly finds herself the victim of Bridget Jones-style mishaps.

Tuesday, September 21: “spilled dessert in front of men — so embarrassing”

Tuesday, October 12: “ran into tray of dishes + spilt meat juice all over me”

With a raise to look forward to, Ms. Rockwell treats herself. “Sure would be fun to have a sports car,” she writes. So in early October, she starts looking at Fiats and MGs.

No surprise, she chooses a Fiat. “So proud!” she writes on December 20.

Of course, adult life being what it is, hardly a week passes before the joy ebbs. On Tuesday, December 28, she writes, “Ice frozen in Fiat lock — I feel it is the first of many problems to come!”

The problem with work is, the more you accomplish, the more that’s expected of you. The problem with suitors: If you wish for them, they might appear. After a year of romantic frustration, Ms. Rockwell finds herself courted in late September by a man we’ll call David. On September 29, she writes, “date w/David — happy to have a date, but … Prospect for dinner, Garfunkels. Starkers. Interesting person, funny looking.”

She runs hot-and-cold for him, but he keeps up the chase. On October 4, she writes, “David asked me out for tomorrow — something makes me go out w/him.”

She adds, “Get rid of the glasses.”

A second date, on Tuesday, October 5, settles Ms. Rockwell’s ambivalence: “Couldn’t wait to get home.” Poor David calls her at work two days later — “I told him I was busy” — and then vanishes from the journal until December 24, when Ms. Rockwell is on the receiving end of a Christmas miracle: “Dozen roses from David — wish it were from someone else!”

Then she adds, “He sure would be a nice one to date.”

David pops by to see her at work the Monday after Christmas, and she writes, “David in — nice, maybe I will go out. Who knows?”

Saturday, January 8: “Work 9-12, finally getting caught up. David in, kind of ignored him, wish he would just be my friend + not ask me out.”

The full weight of a year is lost to us as we nudge our way from one to the next. When a year is laid out before us, as is Ms. Rockwell’s 1982, we can see its whole shape. A year is cyclical, not just in its seasons and holidays but in how we live: Time and again, Ms. Rockwell vows to change herself; time and again, she stays herself. Events that might have seemed like so much happenstance in 1982 feel, in this journal, rooted in a narrative logic. Her stories begin, grow bigger, arc toward significance, then resolve themselves or wind up forgotten. One leads to her breaking a heart, right on the last page.

On January 2, Ms. Rockwell begins her new job as personnel director. Five days later, she writes, “Really enjoy my new responsibility — feel important.” In the next week, she complains of feeling “nervous” at work and blows a no-sweets diet begun on New Year’s Day. Now a grown-up, she stays in on Friday and Saturday nights. Sunday, January 16, is her last entry. The final words: “Q.T. ice cream.”

These stories carried on.