In the Po House 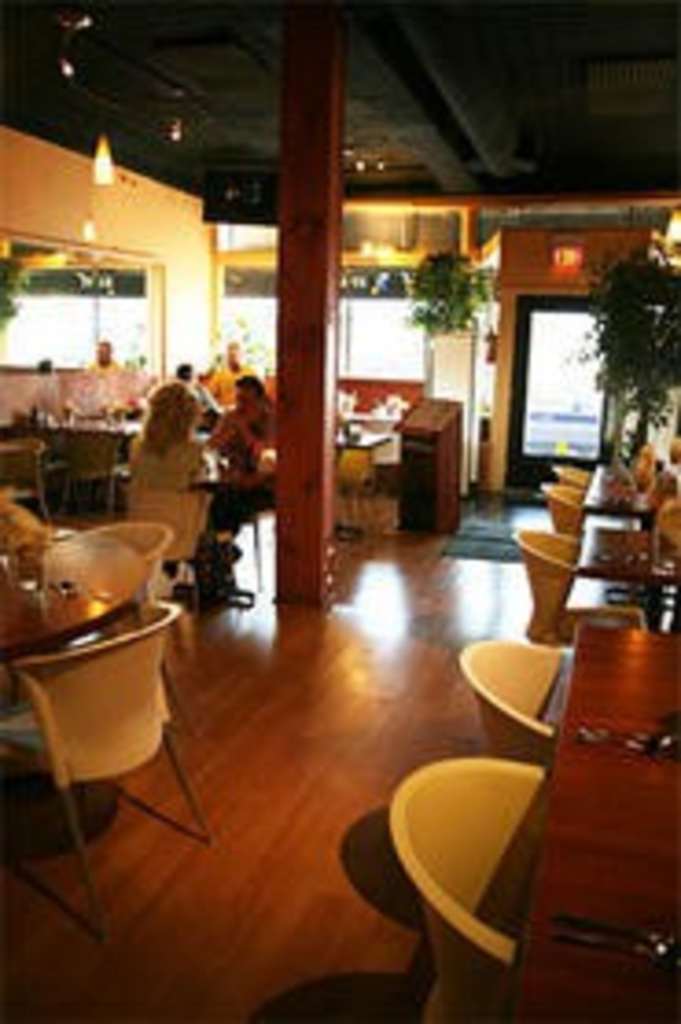 Yes, there is a bar along one wall of Po’s Dumpling Bar on 39th Street, but I’ve never seen a dumpling on it. Nor have I seen a cold bottle of beer or a tiny porcelain cup of sake. The bar is just a decorative feature, like the buttercup walls and the blond-wood floors left behind by this restaurant’s previous tenant, the upscale Circe.

Bartenders at Circe mixed plenty of sophisticated cocktails, but Po’s doesn’t serve liquor with its lo mein and lettuce wraps. That doesn’t bother me, but it might annoy diners who insist on a frosty brew with their bean curd or a Semillon with their sesame beef.

Po Hwang has applied for a liquor license, but even without booze his four-month-old restaurant offers a heady dining experience thanks to some of the best Asian dumplings in midtown. Those dumplings — including the traditional jiaozi steamed version; a pan-fried, open-ended Emperor’s Dumpling; and shu-mai pork balls — are the real draw here. I enjoyed other starters, such as the seaweed salad and the pancake-style onion cake. The rest of the menu isn’t especially exciting; rather, it’s a comforting array of noodle dishes and familiar Chinese-American fare such as lemon chicken and orange beef.

Before I set foot in the place, I’d heard an earful from friends who were divided about the jiaozi joint. They either loved it or hated it. “The service is insanely slow, and the food’s not all that great,” one griped. “It’s a treasure!” said Ann, one of my fussiest friends. “We’ve needed a place just like it on 39th Street forever.”

It took three visits for Po’s to win me over. My first meal there was so nerve-racking that I walked out the door, suffering Po’s traumatic stress disorder. Admittedly, the business had been open only a week or so when Bob and I went for lunch. The dining room was nearly empty, except one large table was full of people who were enjoying a sumptuous meal and extraordinarily attentive service. Our service was attentive, all right — we were the only customers in our server’s station — but the kitchen was glacially slow. It took 20 minutes before our order of Emperor’s Dumplings arrived, but we enjoyed them a lot: each open-ended dumpling a delicate, slightly crispy wrapper folded, crepelike, around a light, gingery minced-chicken filling.

My mood didn’t sour until long after the empty dumpling platter was whisked away. Twenty minutes later, we still hadn’t been served the rest of the lunch. “I don’t know why it’s taking so long,” our server said apologetically, looking nervously around the empty dining room. Bob was fuming, so I canceled the rest of our order, and we went to eat somewhere else.

A few weeks later, my friend Cynthia encouraged me to give Po’s another chance. She liked the food and the cozy intimacy and was concerned that it wasn’t building a steady clientele as quickly as some of the other new restaurants on 39th Street. I can think of one reason, I thought, recalling that ill-fated lunch.

During one of the hottest nights in August, I went back for dinner with Frederick and Ned. Frederick wrinkled his nose when he heard the word dumpling. “Isn’t it sort of hot out for a heavy food like a dumpling?”

“You’re thinking of German dumplings,” I told him. “These are Chinese dumplings.”

The dining room was empty when we were escorted to a sunny table by one of the big windows at the front of the dining room. Ned gasped when our waitress told him that he couldn’t have a martini before dinner. “But we do have bubble teas,” she said brightly.

Ned winked at her: “The only bubbles I want to see, darling, are in a champagne cocktail.”

We drank tea anyway and nibbled on wedges of hot onion pancake (which I liked, but my companions complained they were too chewy) and crunchy fried purses of crab rangoon. “It actually has real crab in it,” Frederick said. “You can see it.”

Well, there was something blended with the cream cheese, and it certainly looked and tasted like crabmeat, though I can’t attest to the authenticity of the ingredients. Still, I was surprised that Frederick could taste crab or anything else, because he kept dipping every edible thing on the table in a neon-red “sweet and sour sauce” that arrived with the rangoon. He loved the stuff, but it only reminded me of the boiled sugar water I pour into the hummingbird feeder in my backyard.

Unlike my previous visit, this dinner’s pacing was anything but languid. Our waitress brought the dinners before we were finished with the starters, and we were barely halfway through the entrées when she dropped off the check. Po was slow no mo’.

I loved the tender sesame beef, glazed in a sweet but piquant sauce and sprinkled with enough sesame seeds to give it a nice crunch. The fried honey chicken was Chinese by way of Mississippi: bits of breast meat dipped into tempura, fried until golden and puffy and thickly lacquered with honey. “Child, it looks like apple fritters and is just as sweet,” Ned said in his Florida drawl.

No one could say that about the chicken lettuce wraps. The golden minced chicken and vegetables that we piled on lettuce leaves were modestly seasoned, but the thick brown hoisen sauce was nearly as salty as the Pacific.

Ned and Frederick shared a bowl of green-tea ice cream for dessert; our server had also described another option, something with apples, but Ned thought it sounded too much like the fried honey chicken.

On my third visit, Po’s seemed finally to be clicking. I was with Richard and Lisa, who were delighted with the doughy steamed buns, stuffed with barbecued pork or chopped vegetables, and the miniature pork dumplings. Our server didn’t rush us this time, and the kitchen (overseen by Po’s wife, Ow) was operating at a civilized pace.

Richard loved his meal, a plate of vivid green-shelled edamame tossed in a satiny sauce with pink shrimp and sliced water chestnuts. Hwang suggested that I sample his version of the ubiquitous kung pao chicken, which he insisted was prepared in the “authentic” manner, whatever that is. He tried to explain the difference to me, but it went over my head. Let’s just say that his kung pao is the prettiest I’ve ever seen, with mushrooms, big pieces of celery and carrots, onion and peanuts. It tasted, you know, like all the less-authentic versions.

Lisa, however, ordered one of Po’s finest dishes: marinated boneless duck, flash-fried so the exterior was crispy but the duck meat remained juicy and succulent. Richard and I ate more of the duck than Lisa did.

“It was a delightful meal,” Lisa said as we headed out. “But why isn’t this restaurant busier?”

Now that Hwang has worked out the kinks that muddled business early on, there’s no reason it shouldn’t be.