In the KCK school board’s search for a superintendent, the fix was already in 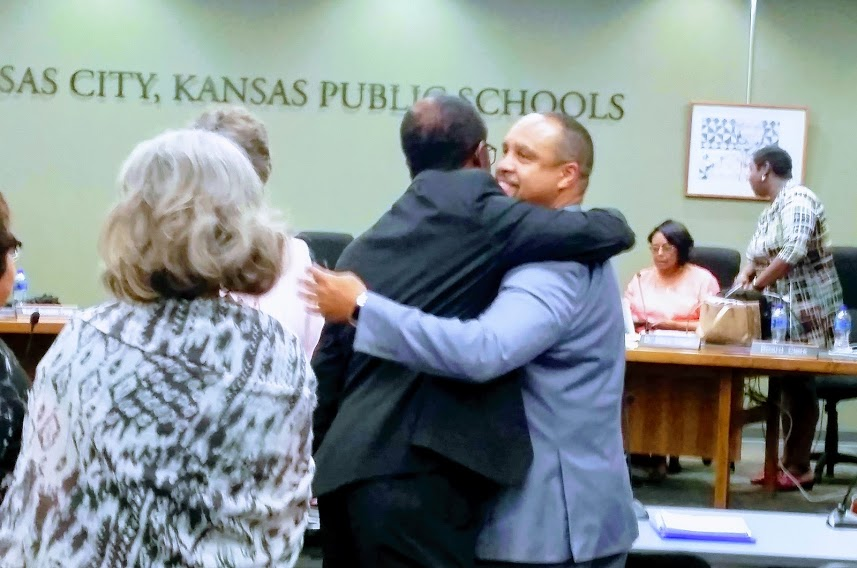 For the first time in 20 years, the Kansas City, Kansas, Public Schools went outside of the district to hire a superintendent on Tuesday night.

The response from an audience that had waited more than three hours for the school board’s vote was hardly affirming.

“No!”  yelled someone else.

“Crap,” another person said in disgust.

The crowd of about 50 district staffers and patrons then rose and gave a lusty round of applause to deputy superintendent Jayson Strickland (pictured above), the inside candidate that the board had just passed over.

So much for a warm welcome for the new superintendent, Charles Foust, whose most recent administrative jobs have been with the Houston School District and Union County Public Schools in North Carolina.

As hirings go, this one could not have been more awkward. Sitting at the front of the room with other senior administrators, Strickland got to hear several district staffers and patrons implore the board to choose him as the replacement for his boss, retiring Superintendent Cynthia Lane.

“He already understands the work, the wins, and the challenges, and he believes in the work that he does,” said Jacqueline Ikerd, an instructional coach in the district.

Speakers reminded board members that over the past year they have consistently called on the administration to hire more teachers and staffers from the local community. Foust created concern last week when he told an audience at a meet-and-greet session that his wife and children planned to live in Houston if he was hired here.

“One of the points I hear over and over is ‘grow our own,’” said Randy Lopez, a district graduate and an administrator at the Wyandotte Health Foundation. “This isn’t the next step on a resume. This is a lifelong commitment to our children and families. This is the dream job.”

No one spoke on Foust’s behalf, but the fix was already in. The board returned from an executive session and quickly moved and seconded a motion to hire Foust as superintendent. It then voted in its frequent 5-2 split, with Brenda Jones and Janey Humphries voting No and Valdenia Winn, Maxine Drew, Harold Brown, Wanda Brownlee Paige and Stacy Yeager voting as a bloc to hire Foust.

As it turned out, the board had negotiated the terms of a three-year contract with Foust before Tuesday’s meeting. He will receive an annual base salary of $230,000, with the opportunity for annual increases. Along with standard district vacation, health care and retirement benefits, he’ll receive $800 a month as a transportation allowance.

No board member spoke up publicly to explain the rationale behind hiring an outsider for a well-run district with a popular and qualified internal candidate waiting in the wings. As The Pitch has reported, the board has done many inscrutable things since Winn, a Kansas legislator, and four followers gained a majority of seats last year.

As staffers and patrons left the meeting — some of them weeping — one got the feeling that an era of rare tranquility for an urban school district had come crashing to a halt.

“People leaving a board meeting in tears: are you kidding me?” said Shanta Bailey, a district graduate. “This is horrible.”

Foust, who has been a finalist for at least two other superintendent jobs, will now have a chance to lead a school district. But it will take some doing before the people of Kansas City, Kansas, accept him as one of their own.