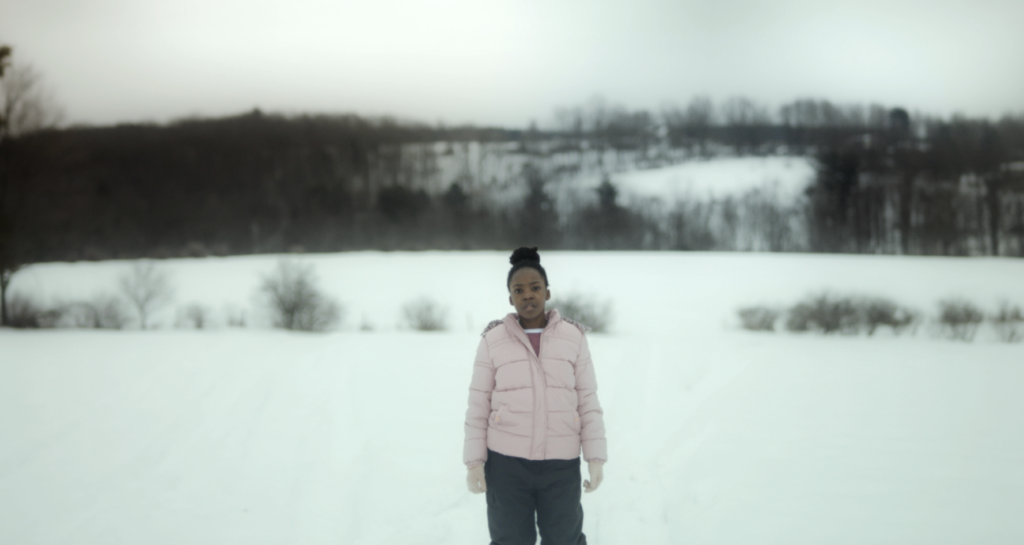 A small girl walks through a field of snow, led by her mother’s voice from the treeline. As she begins to cry out in panic, a figure in a black cloak emerges from the woods. “I am not your mother,” the being whispers menacingly. It’s at this moment that I begin to wonder if watching Andy Mitton’s The Harbinger right before bed was actually a good idea.

The Harbinger spends just shy of 90 minutes exploring the horror of isolation under the guise of neverending nightmares. Set during the peak of the COVID-19 pandemic, the film chronicles Monique’s (Gabby Beans) journey from the safety of home, where she lives with her brother and father (Raymond Anthony Thomas and Myles Walker) to New York City, where her college roommate Mavis (Emily Davis) is struggling with nightmares that will not end. In Mavis’ dreams, which can last for days, she is stalked by a tall, frightening being dressed as some approximation of a plague doctor. The being feeds on the fear and hopelessness that seemed to reach a fever pitch during the height of COVID isolations, and the nightmares it manifests are contagious.

The film navigates pandemic precautions respectfully, accepting that masks and grocery deliveries are now a way of life. It’s a relief to see the concept of caring about our fellow man treated with dignity on film after the derisive tones of Songbird and The Bubble. The heightened family tensions, the fear of strangers, the hesitance to see those we value the most are all portrayed with accuracy and care.

While the film feels timely, it does so in a way that won’t feel dated upon future viewings. Would pre-covid movies have featured a consultation with a demonologist via Zoom? Crowdsourced cryptozoology via Reddit? No, but now that those are plausible resources, I wouldn’t be surprised to see the concept utilized in future movies.

The Harbinger’s focus is on lore and metaphor, which often comes at the expense of plot, but the cast is a joy to watch for the entirety of the film’s 87-minute runtime. Even at its few flawed moments, the movie is a spellbinding exploration of the horror of being isolated and forgotten.

The Harbinger is available now on VOD.