In Spielberg’s Ready Player One, pop-culture nostalgia collides with a virtual reality future 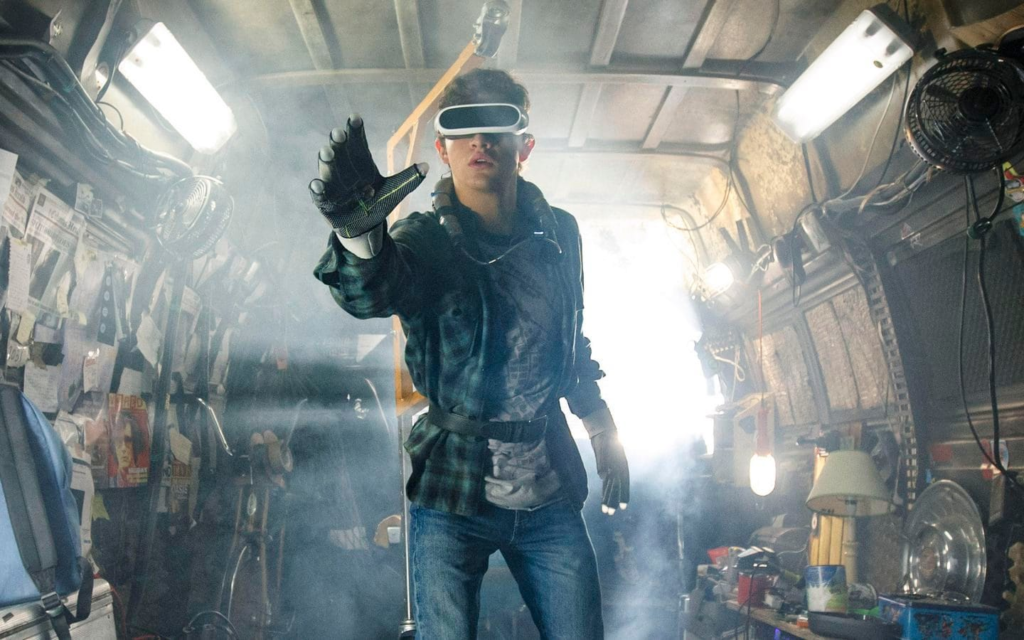 When I was about 12, my parents got me a journal. I started out recounting my day: “Steve came over, we made a snowman, played D&D, watched War Games, it was fun, etc.” But as the year went on, it gradually became a movie diary, and I’d log the number of films I saw that day, followed by the year they were made. At the end of the year, I’d alphabetize them in a list. True story.

So when, in the new Steven Spielberg movie Ready Player One, teenager Wade Watts (in the form of his virtual-reality avatar Parzival) encounters the VHS collection of late game designer James Halliday in a VR space and scrolls through thousands of titles to look for clues to Halliday’s personal life, I can relate. Movies matter. We internalize them, and the ones that we really love become part of our own personal fabric; they help form our identity.

In other words, apart from the fact that I never got much into video games, I’m pretty much the target demographic for Ready Player One, which adapts Ernest Cline’s 2011 VR adventure story, a book that’s overstuffed with pop culture references and nerd trivia. I’ll admit to more than a couple surges of excitement when iconic objects from my own favorite movies, such as Peter Weller’s suit-and-tie combo from 1984’s The Adventures of Bucakaroo Banzai: Across the 8th Dimension, suddenly show up in the VR playground OASIS.

Yet pop culture references themselves are not enough to keep a narrative afloat. (Just look at Family Guy.) The best thing the producers of Ready Player One did was hire Hollywood journeyman Zak Penn to write the screenplay with Cline and re-tool the story to give it a little more depth. There’s an overarching theme about how regrets haunt people their entire lives and a message about the need to live your life — or at least roughly a third of it, lol — in the real-world. The catch-22 here is that Spielberg’s visualization of the VR world is so much fun that the last point comes off pretty half-hearted.

The real world, of course, sucks even worse in Ready Player One. In 2045, people like Wade (played by Tye Sheridan) spend most of their time in virtual reality because pollution and corruption have made the outside world unbearable. Wade and his neighbors live in ratty, run-down trailers stacked precariously atop of each other. An impressive drone shot follows Wade as he descends this teeming mass of humanity, and everyone is seen through the windows of their residences wearing pajamas and VR headsets, swiping at the air around them, completely ignoring their actual surroundings. A child trying to tell her mother that there is a fire in the kitchen is swatted away; the mother just wants be left alone with her VR.

Within the VR environment of OASIS, Halliday (Mark Rylance) — elevated in this society to a God-like deity the likes of Steve Jobs (or Wozniak, more accurately) — has created Anorak’s Quest, a game in three parts, in which the winner is rewarded ownership of OASIS in real life. Meanwhile, evil corporation IOI, led by CEO Nolan Sorrento (Ben Mendelsohn), hopes to take over the OASIS for itself. To that end, it’s increased its odds by creating an army of debt-riddled youngsters who play the game for IOI 24/7.

Spielberg is the perfect director for the VR action sequences of Ready Player One because, even though technically anything is possible in this environment, he keeps the movement grounded in easy-to-follow lines of sight, and establishes characters and plot points that continue to raise the stakes and keep things exciting. Turns out it takes a dash of old-school filmmaking chops to make the most CGI-heavy “live-action” movie in recent memory work.

Wade, as the dashing VR avatar Parcival — a cross between a younger Let’s Dance-era David Bowie and a Duran Duran wannabe — drives the time-traveling DeLorean from Back to the Future in a race over the Verrazano-Narrows Bridge into NYC, where he and the other VR competitors have to evade Jurassic Park’s T. Rex and King Kong in order to get the first of Halliday’s three keys. Dozens of other pop-cultural references litter the foreground and background of the scenes in the OASIS, which will keep easter-egg hunters and online communities afloat for years to come.

Penn and Cline have gone beyond the book and wisely built the foundation of Halliday’s VR game on the ultimate idea that too much nostalgia can be dangerous. And there’s even some emotional resonance by the end. Like he was in Spielberg’s Bridge of Spies and The BFG, Rylance is a wonder, playing the revered innovator as a wounded man-child who missed out on life. More than just quiet and socially awkward, he’s completely withdrawn into his childhood, like, one could argue, much of the film’s adult audience. So even though Ready Player One is about a guy who designed a game that is essentially the ultimate easter-egg hunt, the whole thing is really a cautionary tale about a person who never really lived the life he wanted.

But Ready Player One wants it both ways. The VR fantasy sequences are so thrilling, so much fun, that they make it tougher to swallow the film’s cautionary message. Halliday is essentially the Willy Wonka to Wade’s Charlie, and the final scene in the game is as melancholy as it should be before it reverts to the inevitable triumphant feeling that a hero’s journey like this requires. It’s approximately 15 parts fun escapism and one part reflection. In a culture that’s so obsessed with unearthing obscure references, it will be interesting to see how the movie’s fans — and I think there will be many — process the conflicting messages it presents, if at all.

The difference between two days of gatherings is black and white