In rural Kansas, a music teacher rocks the budget while her students rock their school

On a cold Tuesday evening near the small southeast Kansas town of Galena, everything seemed quiet, with the fiery winter sunset a dramatic backdrop for the surrounding miles of endless, wind-whipped prairie. For a moment, with no cars passing me on Route 66 and a traffic light blinking lazily overhead, I assumed everyone had stayed in for the night.

But I underestimated the draw of Galena High School basketball.

When I arrived at the school, just after dark, the lot was packed. I parked my Ford Focus in the grass. Inside, the squeak of rubber on freshly polished wood filled the new gymnasium, built two years ago when the school underwent extensive renovations. That night, the boys’ basketball team rushed up and down the court, taking on its rival from the neighboring community of Baxter Springs. The bleachers were filled with excited students and even rowdier parents.

As in countless other small towns, athletics take center stage in Galena, which is 151 miles south of Kansas City on Highway 69. Along the blink-or-you’ll-miss-it main drag, the water tower reads “Galena Bulldogs,” in tribute to the high school mascot.

Sports sell the tickets in this rural community of 2,994, but basketball means something else for the students in Andrea Dinkel’s rock band. When the halftime buzzer sounds, it’s their turn in the spotlight. The band has set up its speakers and instruments in the bleachers, behind where their classmates sit, preparing to perform old and new pop songs learned in early morning rehearsals several times a month. 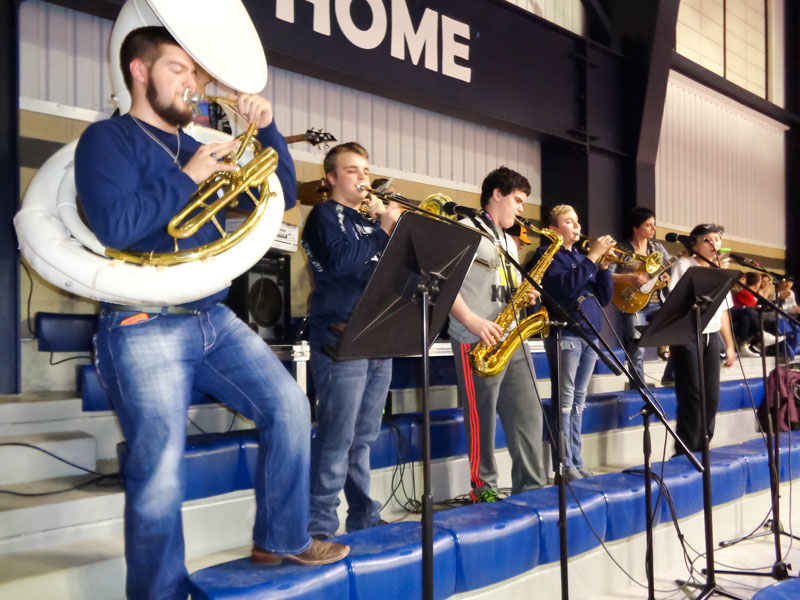 That night, the lead singer, a wispy 15-year-old dynamo with braided hair, kept the lyrics to Pharrell Williams’ “Happy” in one hand, on her phone, as she belted the peppy tune with the confidence of someone twice her age. Her classmates backed her on an array of instruments: trombone, tenor saxophone, trumpet, bass, drums. Dinkel, who teaches band, guitar and music appreciation for the school, played guitar, keeping rhythm while offering gentle direction to keep her young rockers on cue.

At 31, the petite, pixie-haired Dinkel, who studied music at Pittsburg State University, doesn’t look that far removed from high school herself. When she took the job at Galena High School, four years ago, there was no rock band. Galena is among the poorest school districts in Kansas, and the school’s concert band had received the lowest rating from the Kansas State High School Activities Association State Large Group festival the year before Dinkel’s arrival. When she got here, vital instruments were missing from the school’s inventory.

“When composers write music for high school bands, they assume you’ll have certain instruments available,” Dinkel told me when I sat down with her and several of her students in their classroom between performances. We ate chili and giant homemade cinnamon rolls. “When you don’t have those, kids can’t play a lot of age-appropriate music that would mean a lot to them, and that just ticks me off, plain and simple.”

With little money available from the district, she took it upon herself to improve the music program. With approval from administrators, she began raising funds online with DonorsChoose, which connects teachers in high-need classrooms to organizations that match contributions, including Disney, Staples and the Bill and Melinda Gates Foundation.

She didn’t stop with online fundraisers. Having taught herself to sew when Willy Wonka needed a purple coat in Galena High School’s musical production of Roald Dahl’s classic, she decided to use her new skill to benefit her band, which now has 99 middle school and high school students.

Inspired by the Kansas City Royals’ historic march to the World Series championship, Dinkel started making and selling purses and computer bags featuring the team’s logo, as well as those of the Chiefs and Sporting KC. Stylish and sturdy, the bags were a hit, with Dinkel estimating she sold at least 50. She also stitched and sold at least a dozen quilts, as well as a multitude of crocheted hats.

Through her multifaceted efforts, Dinkel has managed to raise nearly $30,000 since last November. With these funds, she has purchased a bass clarinet, new mallets, a set of chimes and a vibraphone, among other equipment. Additionally, she raised enough for her honors students to represent the state of Kansas at the National Independence Day Parade in Washington, D.C. — a big deal, considering some of Dinkel’s students have barely been outside of Galena.

“This area is different than back in Kansas City,” she said. “I’m trying to invent ways for music to work for these kids in their lives.”

The situation in Galena is hardly unique. Nationwide, art and music are often first to feel the effects of budget cuts, with many programs scaled back or eliminated altogether. In Kansas, Gov. Sam Brownback has proposed millions of dollars in additional cuts for public schools and higher education in 2016.

What no budget report mentions are the intangible benefits that music and arts education provide, or the quiet ache that’s felt in their absence. As we finished our chili, Dinkel and I discussed how these programs had made school bearable for us — me as a shy writer who felt confident only when singing in the school choir, Dinkel as a burgeoning musician who grew up practicing songs like “Achy Breaky Heart” on the accordion with her grandmother.

“Playing music is attractive to people,” Dinkel said. “It’s fun. Every kid has a reason for being a part of it. For some, it’s the one thing they can do every day that makes them feel better or helps them forget about some struggles they’re having.” 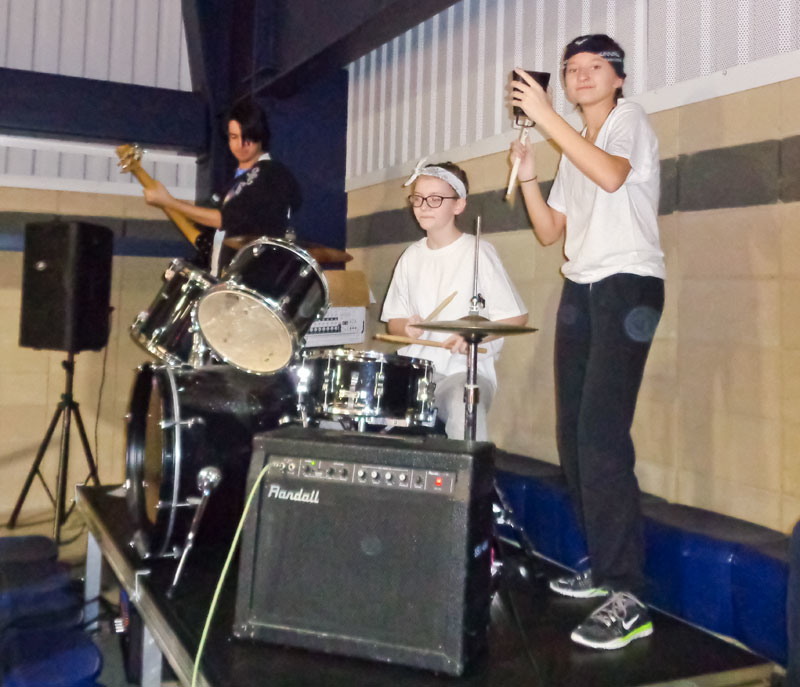 Senior Evan Garcia said when Dinkel came to Galena, he wanted to play the bass clarinet, but the school’s instrument was in poor quality. After fundraising for a new bass clarinet last year, Dinkel said Garcia and the instrument are now “inseparable.” Tyler Lloyd, a freshman, said piano was “in his blood” but that Dinkel encouraged him to try the trumpet, which he now plays in the rock band. Thanks to a recent district purchase, sophomore Connor Adams learned that he loved playing the baritone saxophone. And senior Taylor Curry usually rocks the tuba and sousaphone but wanted to take a turn as lead singer.

Educational growth aside, the students simply enjoy being around their teacher, whom they just call “Dinkel.” They laugh easily, showing off their skills by playing Vance Joy’s “Riptide” on the guitar or plunking out the Star Wars theme on the vibraphone. They feel at home in Dinkel’s classroom.

“Dinkel can do anything,” Garcia said. “She makes school in general more tolerable.”

This year, Dinkel is in the process of raising $7,000 on DonorsChoose for two new timpani. After the drums, she hopes to purchase a marimba, which is about $3,500, and one more bass clarinet, which is about $2,000.

“I’d need to make 30 more handbags to get it funded, and each one takes two hours, so that’s a minimum of 60 hours of my time,” she said. “That’s fine, and I’ll do it, but I already work 60 hours a week. I’m trying to find people who want to help kids out, think music is important, and want to help us grow at a time when we can’t really afford to grow.”

Back in the gym, Taylor Curry got his chance to sing “Hooked on a Feeling.” As he took the mic, Dinkel started that song’s familiar opening chant, encouraging the student section to join in: Ooga chaka, ooga ooga ooga chaka!

For a moment, it seemed the band members were the only ones chanting, but slowly a few students joined in. And finally, the gym came alive with music.