In MTH’s rousing In the Heights, Lin-Manuel Miranda tells another immigrant story 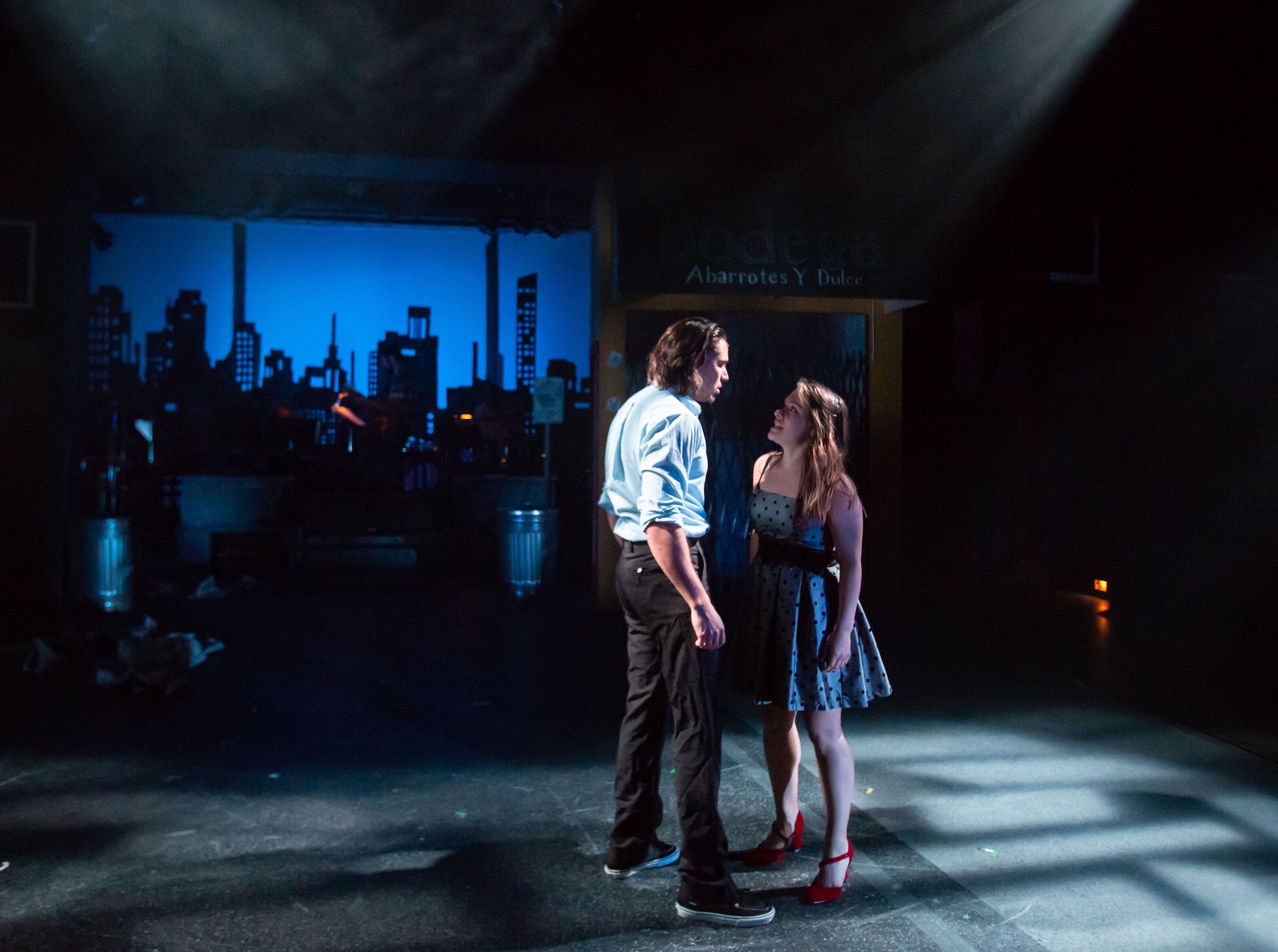 Musical Theater Heritage planned well, staging Lin-Manuel Miranda’s award-winning In the Heights not long after the touring production of the playwright’s Hamilton made a stop in Kansas City.

What MTH Theater couldn’t have foreseen is the increasing anti-immigrant sentiment that may have precipitated the mass shooting in El Paso a week before In the Heights opened.

Why even think about that tragedy at a night out at the theater? It’s not as though the week’s bad news was on the minds of a tangibly anticipative theater crowd, eagerly looking toward a Miranda-composed evening. But In the Heights is about immigrants, specifically Hispanic immigrants, just as Hamilton, ultimately, is the story of an immigrant who works his way up.

The ongoing toxic hubbub around immigration was front and center for this theatergoer during MTH’s finely executed and energetic production, directed by Nedra Dixon. In the Heights is a celebration of an immigrant community in upper Manhattan’s Washington Heights. It’s a story of these inhabitants’ strivings, their joys and their challenges. It’s bound not so much by history but by the relationships and personalities making up their vibrant neighborhood, one that’s in transition.

Miranda began work on the show back in 1999, when he was still in college. After undergoing changes over the years, the musical opened on Broadway in 2008 (starring Miranda) and won four Tony awards, including Best Musical, Best Original Score, and Best Choreography. Not bad for a beginner. (It’s now being made into a major motion picture, set to release next summer.) One gets a few hints of the future Hamilton here—in certain note combinations, in a few phrasings and rhythms, in the humor woven in. 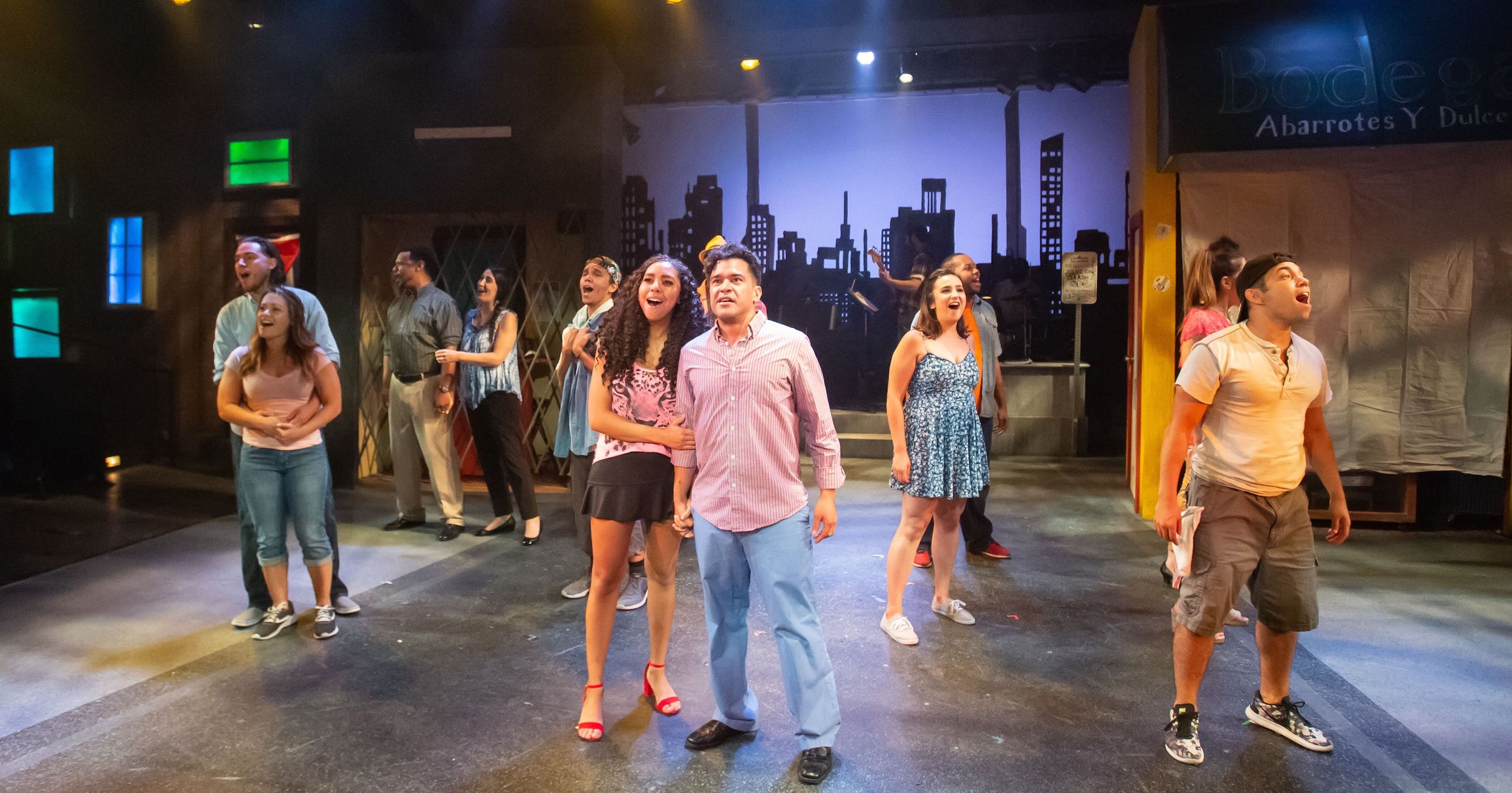 Dixon has compiled a large, talented 14-member cast that maneuvers through Miranda’s music and lyrics (book by Quiara Alegría Hudes), as well as choreographer Kenny Personett’s assorted dance movements, with skill and seeming ease. (Kudos for the blocking of the group numbers in the confines of a smallish stage.) A tight five-member band plays live (music direction by Pamela Baskin-Watson, on piano), though the horns threatened, in Act 1, to overtake the singers. And Dixon makes use of all available real estate, setting some scenes in the aisles at the corners of the stage.

The story’s events take place in the heat of summer, around July 4. Usnavi (Francisco Javier Villegas)—whose parents named him after “U.S. Navy,” the first thing they saw on the side of a ship when they arrived in this country—runs a bodega in the barrio. He’s stuck to this corner like a streetlight, his neighbors tease, but he longs to move to the Dominican Republic and set up shop. He and others in the neighborhood are facing higher costs from gentrification. Abuela Claudia (Alma Fusco), neighborhood matriarch and Cuban immigrant, helped raise him after his parents died. He’s in love with Vanessa (Lily Nicholas), a neighborhood beauty who works in the salon run by the colorful and outgoing Daniela (Vanessa A. Davis), who’s in the midst of having to move her business to the less expensive Bronx.

Working at the salon, too, is Daniela’s friend Carla (Celia Thompson), a pretty young woman who can be a little slow on the uptake but has a good heart. She sometimes questions Daniela’s actions: What would Jesus do? she often asks, to which Daniela responds, Do I look like Jesus to you? Sonny (Tony Pulford) works for Usnavi at the bodega (and serves as a kind of wingman with Vanessa), and he pals around with the pesky Graffiti Pete (Lucas Lowry), whose name defines his occupation.

On summer break from the university, Nina (Gabriela Delano) is the first in her family and in the neighborhood to attend college, but she’s having some trouble there. She hasn’t yet told her parents, Kevin (Keenan Ramos) and Camila (Franci Talamantez-Witte), who run Rosario’s taxi-cab service. She falls for Benny (Anthony J. Gasbarre III), who works as a dispatcher at her parents’ business, and is the lone non-Spanish speaker. Rounding out the cast: the Piragua Guy (Douglass Walker), who sells piraguas (shaved-ice desserts) from a cart, and ensemble members Sicily Mathenia and Robert Vardiman. 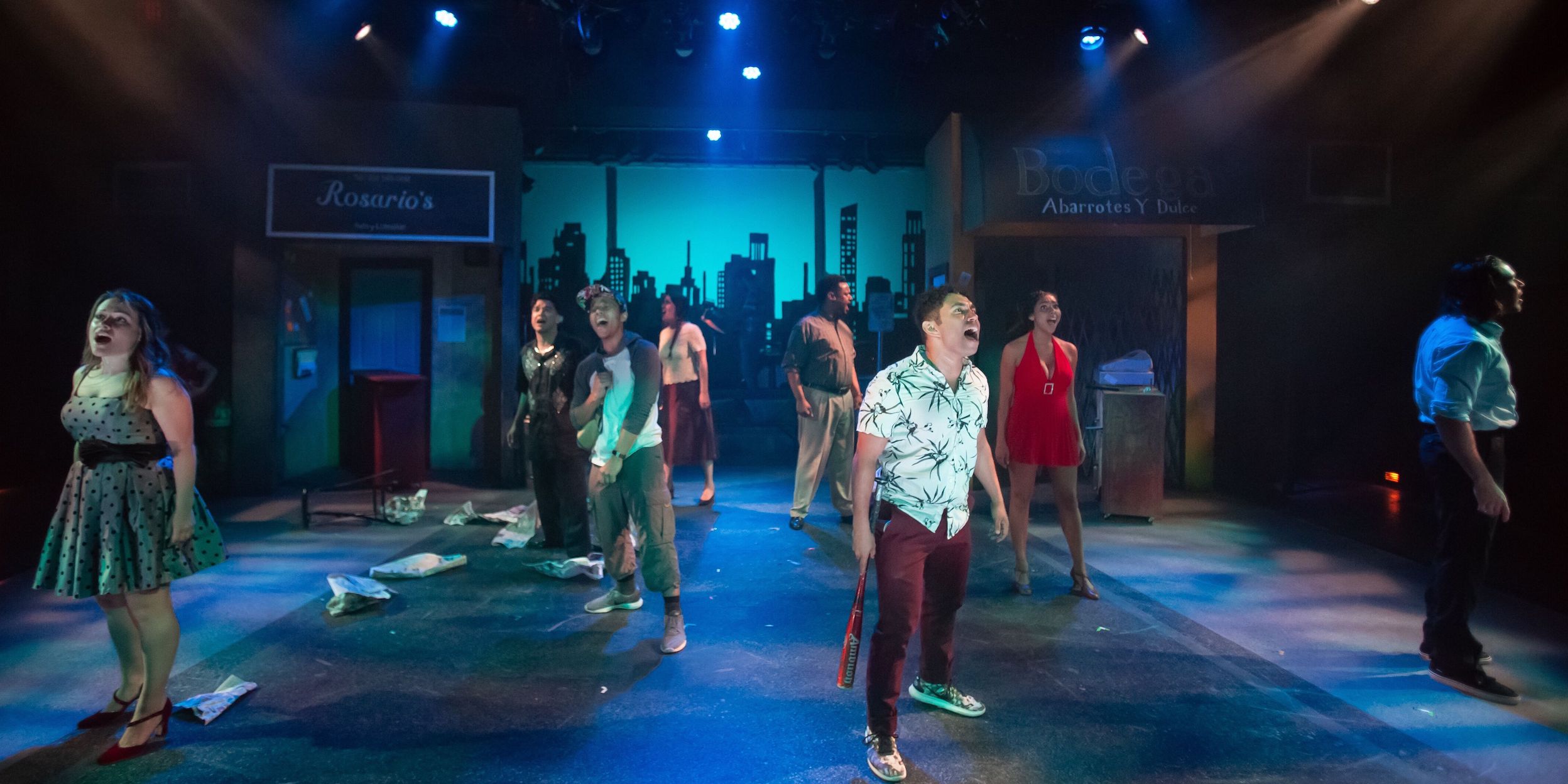 Nicholas’ Vanessa is the center of attention at any community fest, and Nicholas’ powerful voice soars over the band’s horn section. As Usnavi, the role Miranda undertook in the Broadway production, Villegas gives strong, distinct expression to this central character. Ramos renders a moving portrayal as a father who wants to take care of his family but feels inadequate, his “Inútil (Useless)” lingering still. As Nina and Benny, Delano and Gasbarre have palpable chemistry and memorable harmony in “When You’re Home,” “Sunrise” and “When the Sun Goes Down.”

Walker’s full-voiced melodic bits as the Piragua Guy are entertaining musical asides. And Davis, as Daniela, lends dynamic over-the-top comedy and pizazz to a character teetering on cliché.

During a blackout in the neighborhood on July 4, the ensemble’s voicing of we are powerless holds extra meaning. Lighting (by Amanda Zieve) helps dramatize changing environments and emotional moments, and is especially effective in the use of shadows, and of fireworks on Independence Day.

Miranda is a prolific composer and lyricist, whose In the Heights alone has around 23 numbers. (The first act runs 70 minutes.) His work here, while celebratory, also explores more serious themes, about those who, in seeking opportunity, leave behind everything [they] know. MTH Theater, which has sold out the first week of this show, has put together a fine-tuned and alluring production. And its timing is apropos.