If you can’t get out of Kansas, get over it — on a zip line 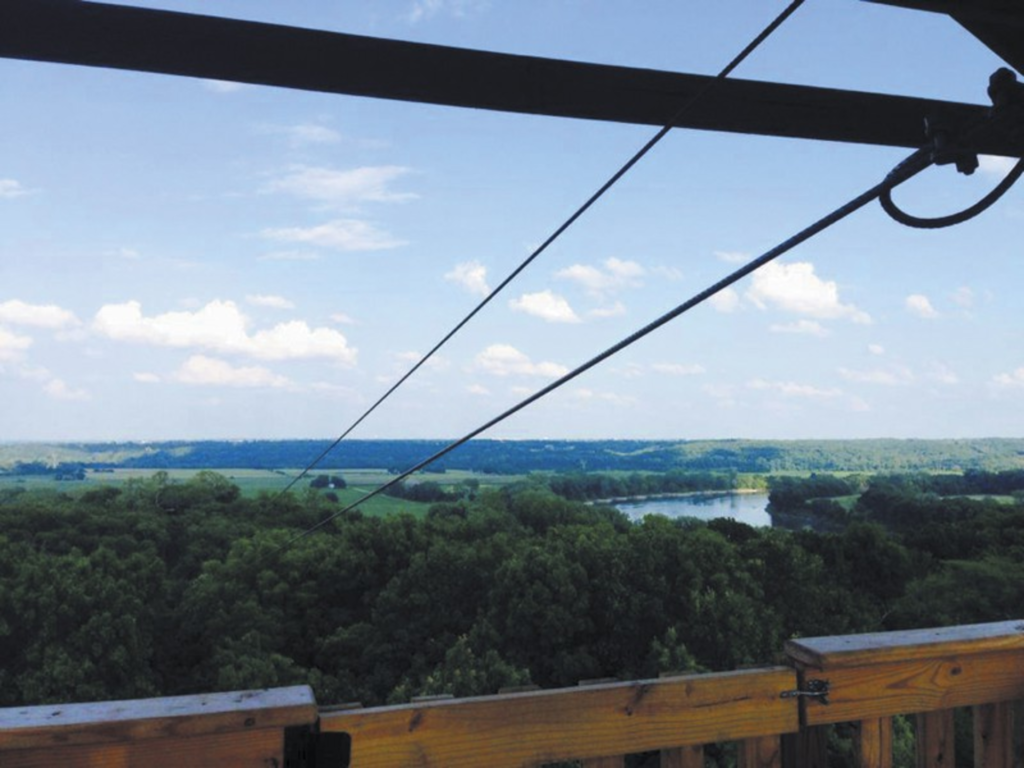 On a humid Sunday morning at Adventure Zip KC, I found myself riding a yellow school bus up a 300-foot Kansas hill — one of the state’s tallest, I’d just been told. The guide at the front of the bus assured everyone that we would tower over the rest of Bonner Springs, a promise that elicited a chorus of sarcastic oohs and ahhs. When it comes to awe-inspiring views, most of my home state feels like a dinner party to which no one brought dessert.

Geographic snoozefest aside, though, anyone afraid of heights isn’t necessarily safe in flat Kansas. I’d prefaced my first visit to the KC area’s only zip-line park with a few Google searches that didn’t help: horror stories of broken lines that had sent would-be dare-devils plummeting 100 feet into rivers. Some had been devoured by alligators, I was certain. I knew the possibility of such a mishap here was slim to none, but the waiver I had to sign, absolving the park of responsibility if I experienced severe head injury or death, wasn’t exactly a steadying force.

“Are you nervous?” I asked my friend as the bus shimmied up the hill. She shook her head. This was a woman who had gone zip-lining in the redwoods before. “Me neither,” I lied.

Fortunately, the park’s guides put me at ease. They were young, probably in their early 20s. One of them, a woman, asked to be called “Fancy Pants,” and the other, a man named James, occasionally spoke with a British accent. They helped us tighten our helmets and wriggle into our harnesses, which felt designed to directly and persistently ride up the butt crack to form an all-altitude wedgie.

I would just have to get used to this assault on my nether regions because my friends and I had signed on for a full tour. This adventure would last all afternoon and include eight zip lines, some of them nearly a quarter-mile long, allowing speeds of up to 40 miles per hour.

When the bus came to a stop, we climbed off and started hiking a narrow, shady trail where everything was verdant and lovely. Birds sang down from trees, and cicadas hummed their end-of-summer songs. In the distance, there were … gunshots? I asked our guides if I was hearing right.

“Yeah, there’s a firing range nearby,” Fancy Pants said. “But we don’t worry about it because they fire in the other direction. We think.” 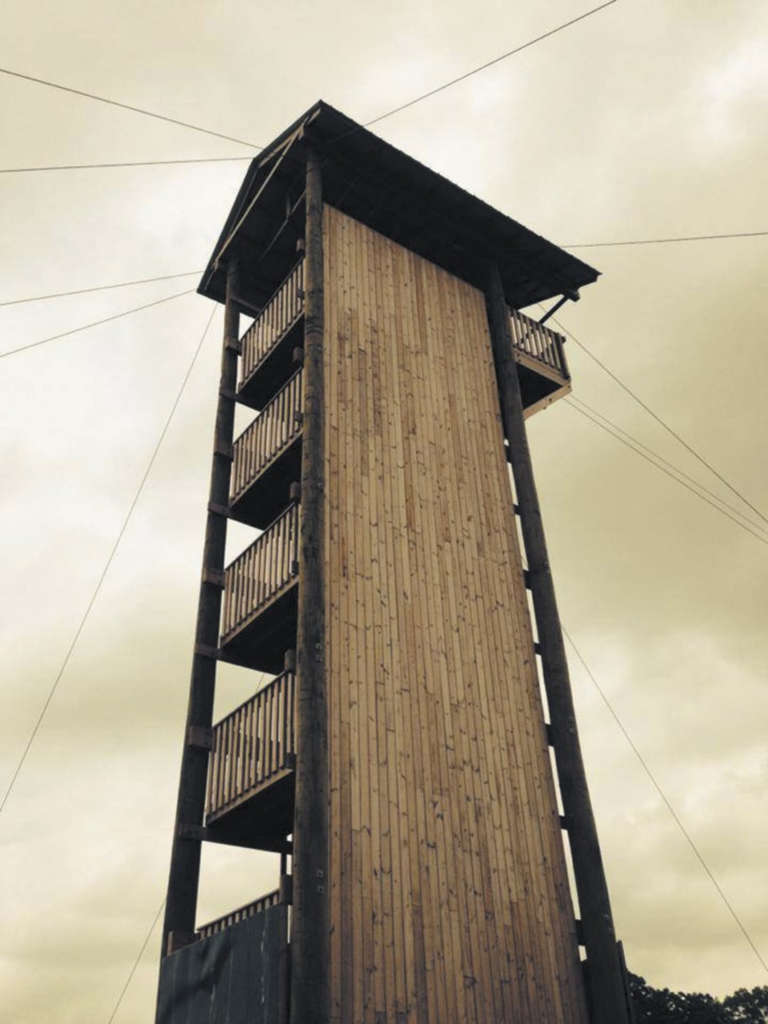 The first zip line was more impressive than I’d expected. It cut through the treetops, and I couldn’t see the other side. James went first to demonstrate that the line was safe. As he slipped from view, Fancy Pants started singing that fucking song from Frozen.

No one stepped up.

At last, I volunteered, grabbing onto the line for support. Fancy Pants pushed my hand away. “Do not hold on to the line,” she said. “The first time we’ll tell you nicely. Then we’ll start slapping you.”

There was good reason for her bluntness. The “carriage” — the metal thing with wheels that attaches to the line and allows you to zip — can pretty easily cut your fingers off. I didn’t make that mistake again.

Fancy Pants secured me to the line, and I took a few steps forward. And then I was off. The experience was exhilarating, at least until I flipped backward and couldn’t figure out how to turn back around. I didn’t need to worry, though, because James was there to stop me.

Subsequent lines were even longer and faster. To begin the final five, we climbed a 65-foot tower that swayed in the breeze, and then we zipped from one structure to the next. I grew more comfortable with each embarkation, so much so that I let go of the handlebars and stretched out my arms and legs. I was flying. Below was green, mossy forest, and above was nothing but sky. In the distance, I could see the Kansas River. From this perspective, the Sunflower State turned lovely. 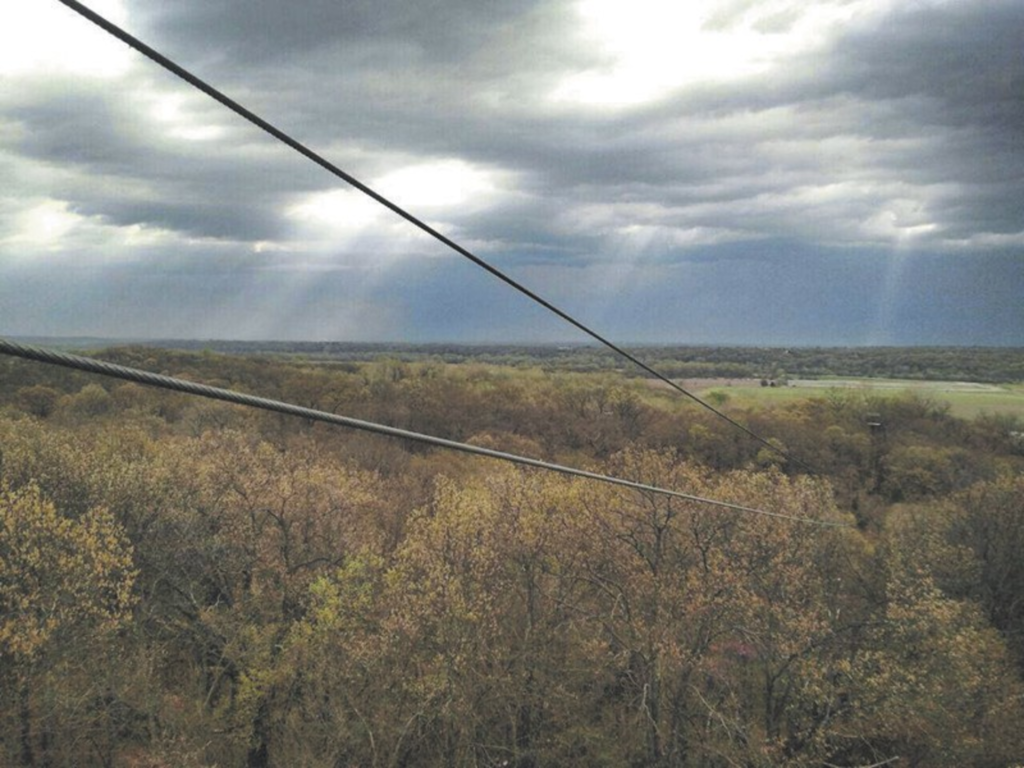 One person in our group began the day afraid of heights but had mustered enough courage to complete every zip — until we got to the last tower. Getting down required stepping directly off the side, resulting in a free fall that lasted a couple of seconds before the line caught you.

“I don’t think I can do it,” she told our guide. “You might have to push me.” She seemed on the verge of tears.

James had first encouraged the reluctant zipper with a little lighthearted shaming. He reminded her that zipping was way more fun than being slowly lowered through the platform’s trap door — zip lining’s equivalent of a roller coaster’s chicken exit. “It’s pretty lame,” he said.

James tried a different approach: “Think of the hot wings you’ll get to eat later,” he said. She must have been a woman after my own heart because this did the trick. Her legs shaking, she stepped off the platform.

Later, on the ground, I asked her if she was glad she’d done it. She squeezed her husband’s hand and nodded. I was glad I’d done it, too. I felt brave.

I also had a new appreciation of Kansas’ beauty. It’s true that a forest in Bonner Springs is not the redwoods. But when you spend most of your days in an urban environment, even this place felt like a remote getaway. And when that harness came off, it felt damn good to finally pick that wedgie.