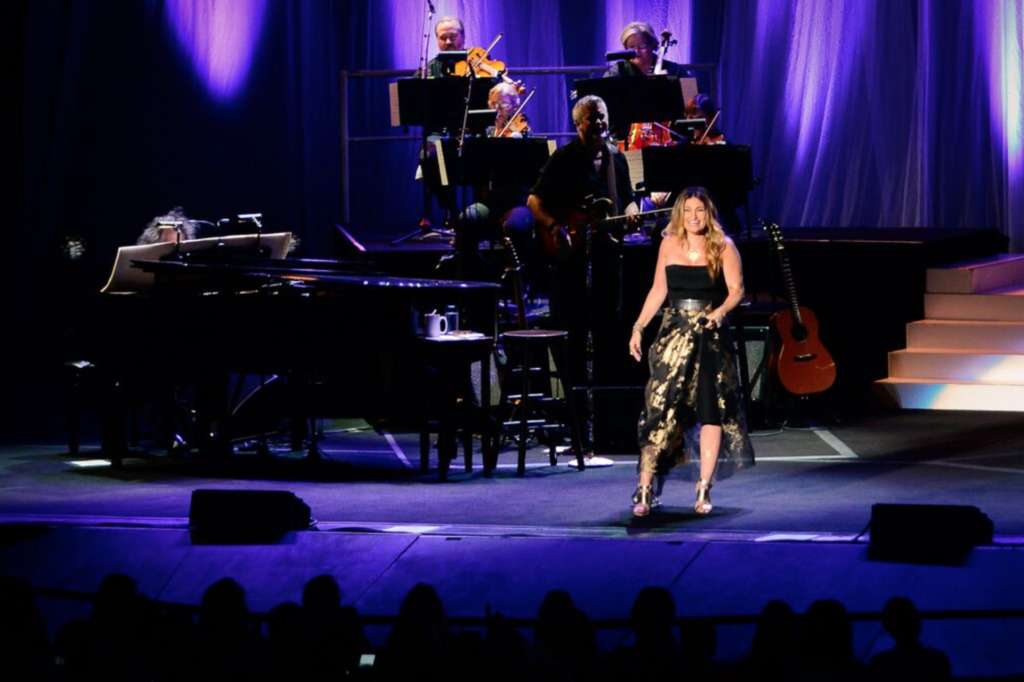 Divas of the world, pay attention: Idina Menzel is who you should be directing your prayers to. Last night at Starlight, she proved to the audience of around 3,600 that you don’t need a half-dozen costume changes and fancy stage effects to impress. If you’re Menzel, all you need is that impeccable voice and a bit of sincerity.

Menzel burst onto the stage at approximately 8:30, appearing on top of a white staircase in a black strapless dress with a gold skirt, a Julia Roberts-worthy smile and cheekbones that could cut glass. She descended as she delivered “Defying Gravity,” the epic tune from the sensational Broadway musical Wicked (in which, Menzel playfully reminded the crowd later, she was “the original green girl”). The notes she hit — and held — in that opening song and every one that followed were chilling, more powerful than any TV appearance or YouTube clip could convey. And for the hundreds of people, like myself, who were seeing Menzel for the first time, the experience was thrilling. 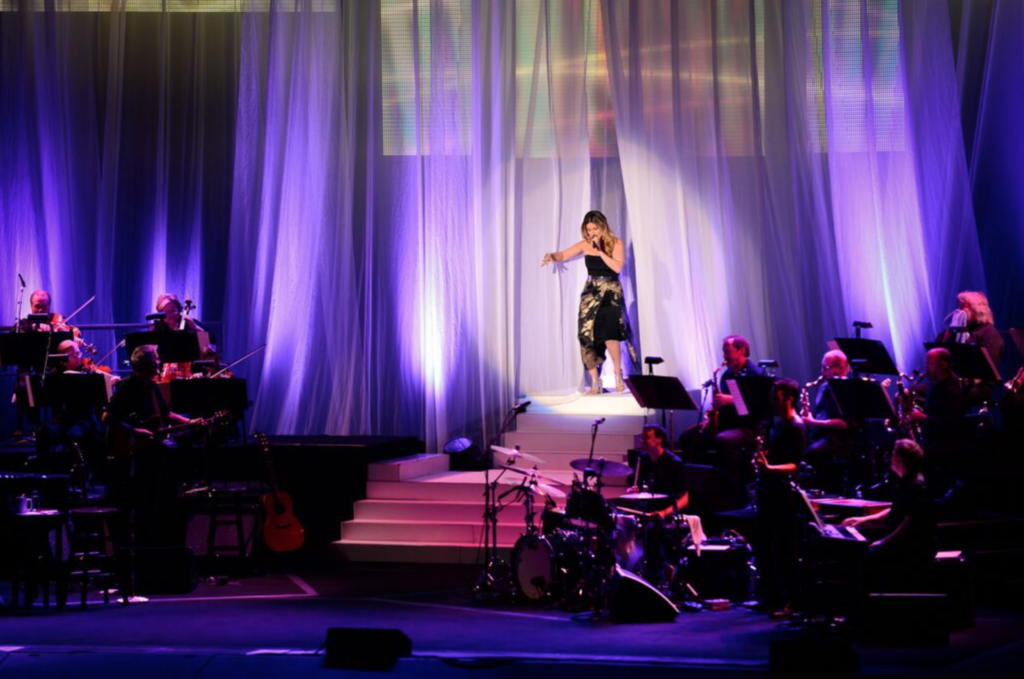 Shortly after “Defying Gravity,” Menzel took a moment to call out a couple latecomers — two gentlemen — that were filing into their seats. She offered to start the show over, pantomiming her opening number — to the delight of her audience, and possibly the mortification of the latecomers.

“Are you settled now? That’ll teach you to be late to a show,” she said after. “I’m just kidding! Did you hit traffic? Yeah? You don’t even know who I am. Your girlfriends told you to show up. Because you’re straight, right?” Menzel paused for the laughter. “The only people that know me are little 13-year-old girls and old gay men. It’s a really good demographic, though.”

This was how Menzel would conduct most of the night: Delivering a gut-wrenching Broadway showstopper, then joking with the crowd in a way that highlighted just how self-aware she was, then back to the mirror-shattering notes. She had our emotions on a see-saw.

She got back to business with a cover of Barbara Streisand’s “Don’t Rain on My Parade,” followed by an anecdote of performing that song live for dear ol’ Babs, then performed “Brave” and title track “I Stand” off her original 2008 album. Those songs were beautifully done, and while they certainly suited Menzel’s voice — they were hers, after all — it was the show tunes that really engaged the crowd. “The Wizard and I,” another Wicked number, was received with shrieks of approval.

Afterward, Menzel grabbed her smartphone and told the audience she wanted to “Periscope” with it, referencing the social media platform that, apparently, her management encouraged her to participate in. She struggled with the app, though, then struggled with connecting it, then finally called a fan onstage to help her out — while she sang a along to an improvised tune from her 15-piece band (mini-orchestra? Menzel had a baby grand piano, brass and woodwind sections).

“Thank you for bearing with me on that,” she told the crowd after the fan had successfully uploaded her video. “Just singing really high notes and holding them for days… Not good enough, gotta do some fucking thing called Periscope,” she continued in a lighthearted rant. “Gio — Gio is my hair guy — he says Nicki Minaj does it. Well, if Nicki Minaj does it….”

As she spoke, Menzel carefully perched herself atop a barstool for a rendition of Joni Mitchell’s “River,” which obviously broke hearts. Menzel quickly followed that with a version of Cole Porter’s “Love For Sale,” which she introduced as a song she had first learned her freshman year of college in a voice class — she had wanted a “sexy” song to woo her instructor (“He was gay,” Menzel deadpanned. “Freshman girls….”).

“I sang one line and he stopped me abruptly,” Menzel said. “‘What are you doing?’ he asked me. ‘You can’t just play sexy. You have to think about who this woman is, and how she doesn’t know where her next meal is, and how desperate and alone and scared she is.’”

It was with this number that Menzel showed off her theater training. After setting up the song, she stripped away the gold tulle from her dress, wrapped her arms around her torso and launched into a harrowing cover, capturing Porter’s character and interjecting a stormy chunk of the Police’s “Roxanne” in the middle of the break. After that, she launched into a joyful Ethel Merman medley, featuring “There’s No Business Like Show Business,” “Anything Goes” and “Everything’s Coming Up Roses.” 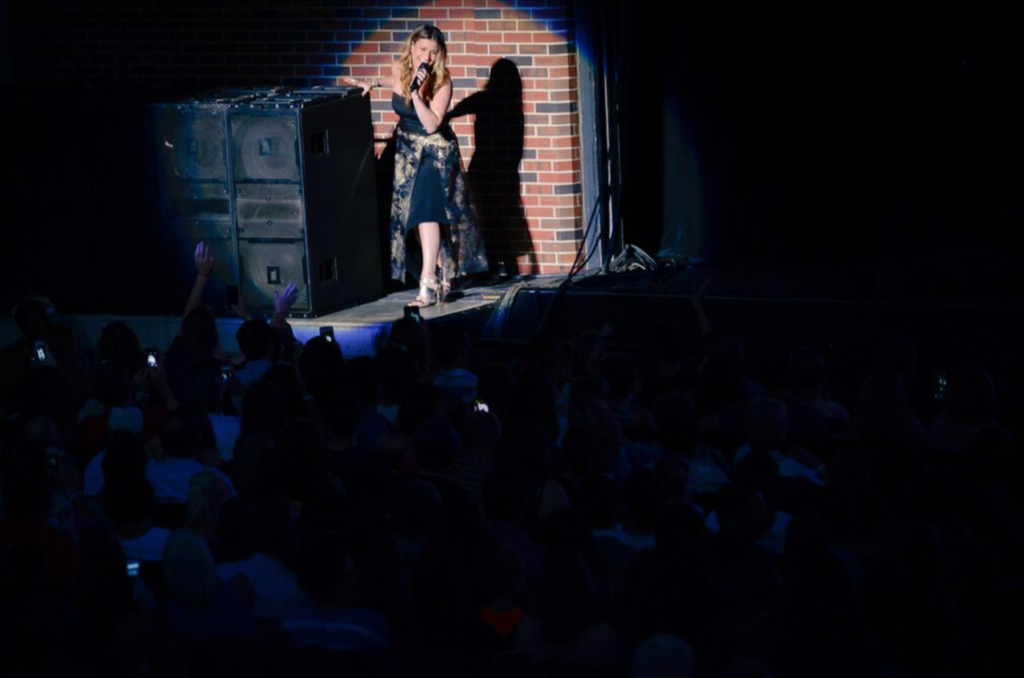 There were innumerable big moments in the evening, but the greatest highlight came as Menzel delivered a brief soliloquy from her knees following this ode to Merman. She had sunk to the stage, barefoot at this point, and told the audience that even though she knew she was privileged to be able to sing the songs “about people who are different and who harness the power of what sets them apart,” even Menzel has her off days.

“If I’m being completely honest, some days I wake up in the morning and I don’t feel like getting out of bed,” she told the rapt audience. “I’m sure you have those days, too. Maybe the night before somebody broke your heart, or maybe you heard something somebody said about you, and it just rocked you to your core. Or maybe you look in the mirror that day and you just don’t like what you see. I have those days, and on those days, it’s kind of hard to find it in myself to sing a song like ‘Let It Go.’ Sometimes I just don’t feel like letting it go. Sometimes I want to sing a different song.”

And, without a pause, Menzel launched into a cover of Radiohead’s “Creep,” which she performed from the floor of the stage. More than her flawless vocals on this song, it was her transparency and her rawness that made this moment so affecting (while the last year and a half has been “incredible, professionally” for Menzel, she admitted that it had been personally difficult — a reference to her recent divorce after 10 years of marriage to actor-singer Taye Diggs). By the end of “Creep” — the final notes of which Menzel sang from a crumpled ball on the stage — the audience was on its feet for the first standing ovation of the night.

And still, she wasn’t done. The grandest songs of the night were still unchecked. After rising back to her feet, Menzel launched into Rent tune “Take Me or Leave Me,” and following the first verse, she strode into the audience to select three fans to help her finish the duet portion of the song (she managed to find three surprisingly impressive singers). She dedicated “No Day But Today” to Rent creator Jonathan Larson, and I was not the only one openly weeping as she sang that anthem. She gave us “Always Starting Over” from her most recent Broadway show, If/Then, and performed Wicked‘s “For Good” a cappella.

Menzel closed out her set with “Let It Go,” and she called all the small children up to join her as she perched on the stairs off the stage. A flood of tiny bodies in sparkly Elsa outfits swarmed around her, singing the chorus loudly with her as Menzel held what appeared to be someone else’s one-year-old. 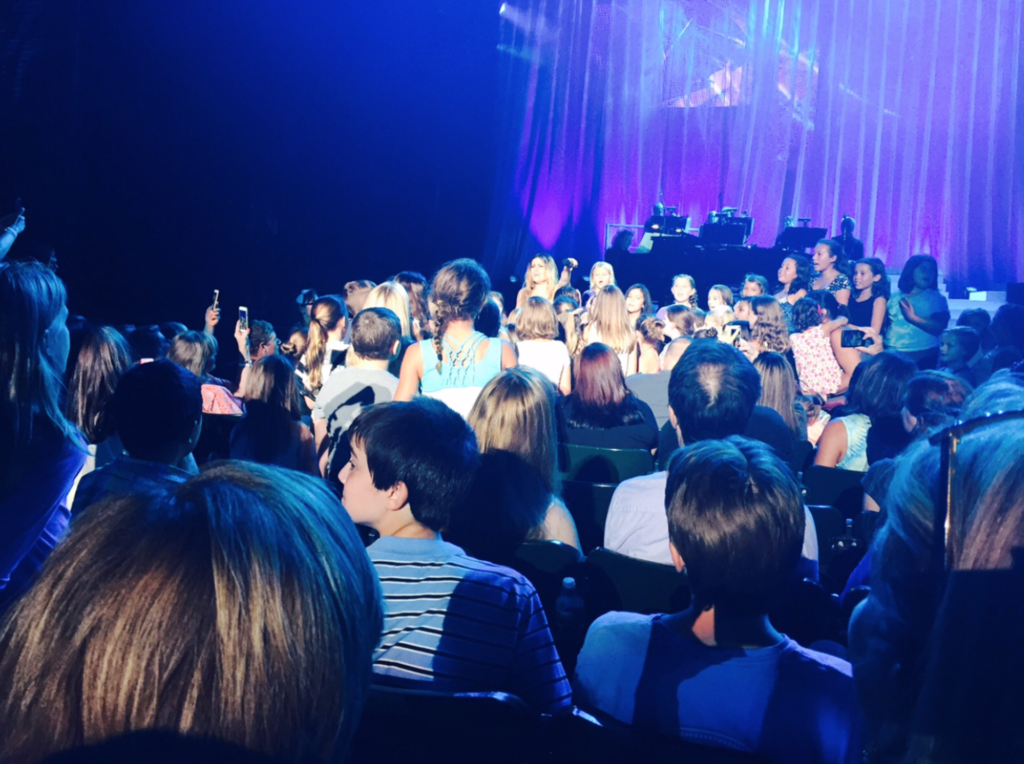 “That is so stinkin’ cute,” a woman behind me exclaimed, and despite the fact that I have never seen Frozen and despise it anyway (I am pretty much dead inside), I had to agree with her.

Eventually, Menzel passed the child back to its adult, and sent the kids back to their seats (“We’re all going to get back safely,” she said, “and our parents are going to put the phones down and help their children so that no one is trampled”). She finished out the song with several hair tosses and arms extended, and she disappeared as the stage went black.

But a split second later, and Menzel was back for the two-song encore: “Child,” a new, original song she dedicated to her son, Walker, which she performed from a stool, and the Annie classic “Tomorrow,” which she said she had been singing since she was a child. She delivered this song, still barefoot, with a giant pink bow in her hair — one of the munchkins had gifted it to her — beaming as she belted out the lyrics. Then, just over two hours after she had first appear onstage, Menzel was done.

Despite the fact that she adhered to the setlist she’s been running on this tour, not one moment of last night’s performance felt rote — even if Menzel’s song introductions and stage antics were finely rehearsed. Chalk it up to her acting skills, or to her being a goddamn professional. Or, perhaps, to her diva status.

Leftovers: No opener. But I did get to overhear this delightful exchange from the couple behind me, a few minutes before the show started:

Man #1: “I was going to go pee before ‘Defying Gravity,’ because I know that’s what she opens with. You know how small my bladder is.”

Man #1: “I’ve been to the doctor, there’s nothing wrong with me. It just happens when I drink a lot. The more I drink, the more i have to go to the bathroom.”