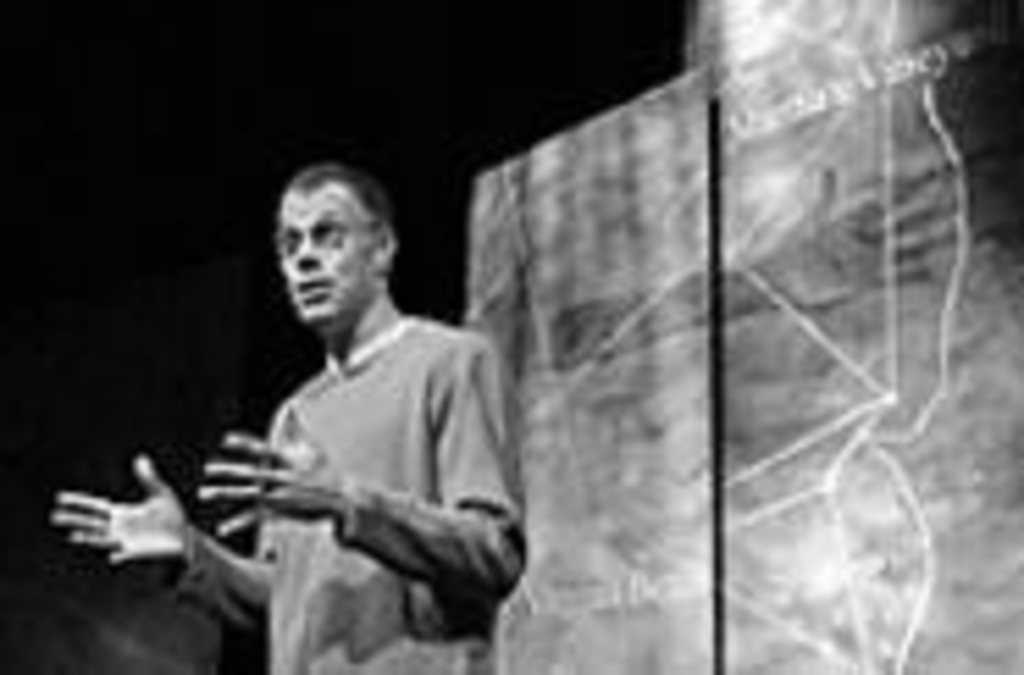 At 31, Michael Sidney Fosberg takes on adult challenges that fling him back to feeling like a kid. First, his mother and stepfather decide to divorce. This spurs him to ask about the biological father whose entire history his mother has effectively buried. He feels “like a jigsaw puzzle with a big piece missing” until he meets his real father and grandparents.

The Missouri Repertory Theatre production of Fosberg’s biographical play, called Incognito, stars Fosberg himself, a theater professional who has acted and directed across the country. His story is intermittently interesting and moving but more often is self-indulgent and overwritten. Though the show spans the cultural crises of the late 1950s (when Fosberg was born) to the restitutions of today, it’s about his identity, not the nation’s. Fosberg never offers a compelling reason his life story is now a two-hour show.

Unlocking “the vault” inside his mind also unleashes a string of flowery and superfluous prose. His hugs are “embracing,” he runs “swiftly” and he hears the “familiar sound of the phone.” (I suppose it is.) Upon arriving at his apartment, he writes, “I opened the door and entered the dark room.” Later, upon receiving a package, he says, “I sit transfixed at the return address” — as he sits transfixed at the return address. Even nods of the head aren’t just performed; they’re commented upon: “I nod in affirmation.” The show runs on and on like this, a geyser in need of a cork.

Like Fosberg, director Michael E. Myers and set designer Ryan McKinty-Trupp have been imported from Chicago’s Bailiwick Repertory Theatre, where the Missouri Rep’s artistic director, Peter Altman, apparently fell in love with the show. Myers makes excellent use of the Rep’s larger stage, and McKinty-Trupp’s set presents a lovely series of panels that make up an abstract map of the United States. Local lighting designer Jeffrey Cady offers a series of meticulously rendered shifts in tone and shape. Unforgivably, the sound designer isn’t credited at all. (To echo one of Fosberg’s lines, “Whazzup with that?”)

In the theater, it’s nothing new when one person believes his life is ripe material for a one-person show; lately, in fact, it’s pretty common. Some of the products of such thinking are transcendent, such as Elaine Stritch Takes Liberty, but many — say, David Drake’s The Night Larry Kramer Kissed Me — are a little flat if you’re not sitting across a coffee table or a margarita from the storyteller. Fosberg’s story has depth and color but doesn’t earn its high-profile place on the Rep’s stage.