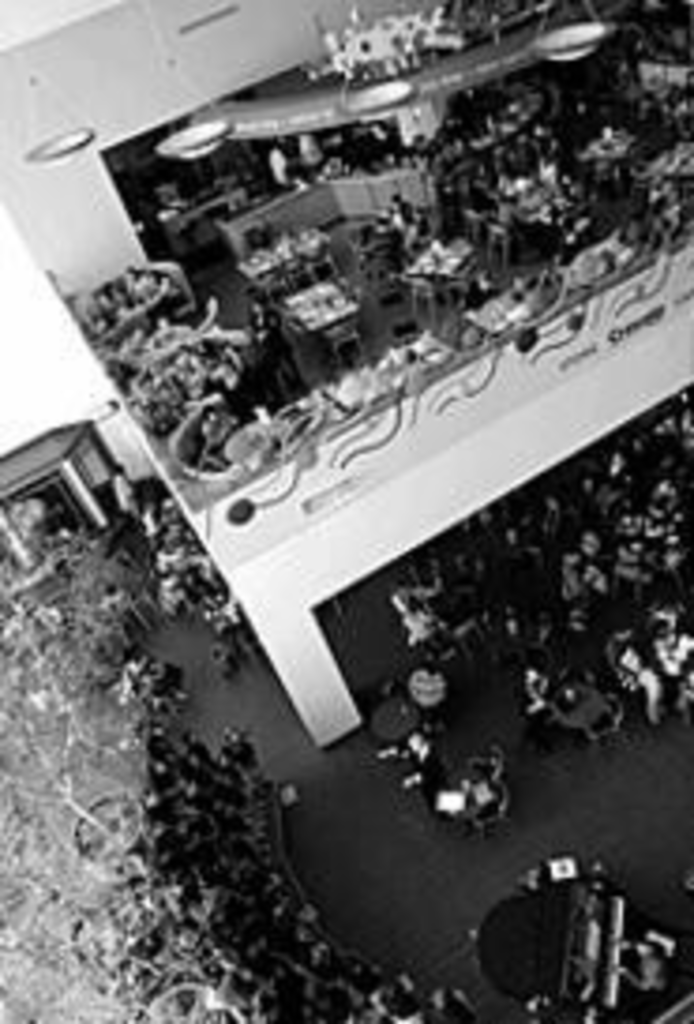 At the risk of sounding like Ebenezer Scrooge, I have to say that the magic of Christmas was nearly ruined for me after two frightful meals at the Crayola Café this month.

I know what you’re thinking: Why in the hell would he go back to that kid-friendly dinette after giving the colorful but crummy joint a negative review two years ago (“Stick It!,” January 30, 2003)? That thought did cross my mind as I was practically begging friends to dine with me there — my two teenage goddaughters rolled their eyes and laughed in my face when I asked them. But I had my reasons. When I last ate there, the restaurant was still operated by Hallmark’s former restaurant division, Culinary Concepts. This past March, Hallmark turned those duties over to the Hyatt’s food and beverage department.

Since I like two of the Hyatt’s signature restaurants, Skies and the Peppercorn Duck Club, I had a vision that this well-oiled operation might make some sense out of the Crayola Café, which tried to serve imaginative food in a creative setting but always missed the mark. Maybe, I thought, the Hyatt would attempt to be a little less artistic and focus more on taste and value — you know, like a really fun diner. But that was just a fantasy, like Santa Claus.

Oh, the place isn’t a total nightmare, particularly during the holidays, when Crown Center is spiffed up for the season. I don’t always think it’s a wonderful life, but even my cynicism eased at the site of the sparkly Mayor’s Christmas Tree, visible from the second-level patio, where the Crayola Café is perched. From there I also could see the immense holiday wreath and many pretty garlands decorating Crown Center’s front glass wall.

Why, my mood was getting downright merry! I even had a brief encounter with the Ghost of My Own Christmas Past as I listened to various grade school choirs sing carols down on the lower level. It reminded me of my own parochial school holiday pageants. The memory almost brought a tear to my eye.

But was it really memories evoking those tears? Or was it a thick onion ring with watery ranch dressing? Or was it the tortilla chips served with the lukewarm, soupy “artichoke spinach dip,” which actually might have benefited from the texture of a few melted crayons?

I was dining that night with my friends Bob and Jennifer, who immediately noticed that even though Crown Center was crawling with kids, only a handful of them were actually dining with their folks in the stubbornly uncheery Crayola Café. Jennifer looked down at the single-page “For Big Kids” menu and noted that the collection of appetizers, salads and sandwiches was like most bar menus in town, if less interesting.

“But you can’t get a drink here,” I said, flagging down a waitress, “can you?”

“Oh, yes,” the server said. “We have beer and wine and specialty drinks.” But she didn’t offer to explain what a Crayola Café specialty drink might be, and frankly, we didn’t care. The place was already so weird, who needed liquor? We were debating which entrées sounded edible when Bob practically jumped out of his seat. “Did you hear that?” he whispered. “The choir downstairs stopped singing Christmas carols and is singing ‘The Rose.’ You know, from the Bette Midler movie!”

Quietly, we listened to kids warble the bittersweet ballad from 1979. It did seem a strange musical choice but preferable to yet another rendition of Handel’s Messiah. Our waiter, a strapping blond youth named Carey, wondered why we were giggling. Bob said, “Don’t you recognize this song?”

Carey, all of 19 years old, didn’t know “The Rose” from a pink crayon. Suddenly the miserable realization hit that we were far too ancient to be eating in a restaurant with color-me place mats and waiters who should be modeling for Tiger Beat.

Still, what pubescent was going to order lobster bisque as the soup du jour? Bob liked the shiny, creamy soup, which was the exact color of an Atomic Tangerine Crayola. It barely had a hint of lobster in it, but c’est la vie. The soup was vastly preferable to dinners such as the fish and chips. Jennifer said the dry slab of fried cod reminded her of “the daily lunch specials at a high school cafeteria.” In fact, I had another flashback to my youth when the Ruben’s Ruben appeared; it tasted as if it had been made from the same prepackaged sandwich meat I used to find in my lunch box. Bob liked his club sandwich, though — it looked good, tasted good and was accompanied by a big mound of Tater Tots.

“We didn’t used to allow adults to order Tater Tots,” Carey confessed. “But they recently changed the policy.”

Well, they also need to change the policy on some of the desserts. Perhaps they shouldn’t serve the Grandma’s Deep-Dish Apple Cobbler so hot that it tastes as if it’s just been taken out of a nuclear reactor.

The Hyatt Regency’s food and beverage director, Teri Rack, might have thought I was the Gourmet Grinch a few days later when I rattled off my criticisms of the place. “It’s still in transition,” Rack said, “and although we have a very creative executive chef now, we do still have some issues from the previous management we are dealing with.”

Many of those issues were obvious the night I returned with Bob and Wendy, who found it “hilariously subversive” that we were dining at the venue without children. But Wendy’s good humor disappeared as she tasted the dishes we had ordered to share. I agreed with her that the Asian spring roll was “obscenely greasy” and that the “grilled chicken” on a visually horrific pile of nachos — which seemed to be drenched with cheddar cheese soup instead of actual melted cheese — bore no resemblance to anything that once had pecked or squawked.

“This place makes Chubby’s look like The American,” Wendy said, pushing the nachos to the end of the table. It certainly made the old Crayola Café, which had a menu created by the American Restaurant chefs, seem like a four-star restaurant.

Wendy and Bob could see that the hanging light fixtures were dirty, and the restaurant’s manager spent more time busing dirty tables than taking any interest in those that were occupied. She looked desperate to get out of the place, Bob said.

“This is the kind of place that you take kids when you want to punish them,” Wendy said after sending back her first dinner, the Philly Cheese Wrap, which had ridiculously tough beef slices.

I could take only a couple of bites from my own Jump’n Jack’s Jack, the lewdly named version of an open-faced sandwich: a soggy English muffin topped with turkey and ham, more of that watery lukewarm “cheese sauce” and stale “fried onions.” Not even the restaurant’s excellent chocolate malt could make up for the disappointment.

Bob ordered a seemingly safe dish, a hefty Cobb salad heaped with chopped chicken, tomatoes, avocado and egg. “It’s not too bad,” he said, “but the dressings are terrible.”

At least our server remembered to bring dressings with the salad. When Bob ordered a banana split for dessert, what arrived was a sliced banana with three scoops of ice cream. “Hey,” he shouted at the server, “the menu says it’s supposed to come with pineapple, chocolate and strawberry sauces.”

The server looked in disbelief at the laminated dessert menu Bob held in front of her, then returned with three little dishes of the ice cream sauces and nary an apology. The manager never looked up from the table she was busily swabbing clean.

I couldn’t wait to pay the bill and get out. For the first time in my life, I was actually glad to be sent to bed without dinner.