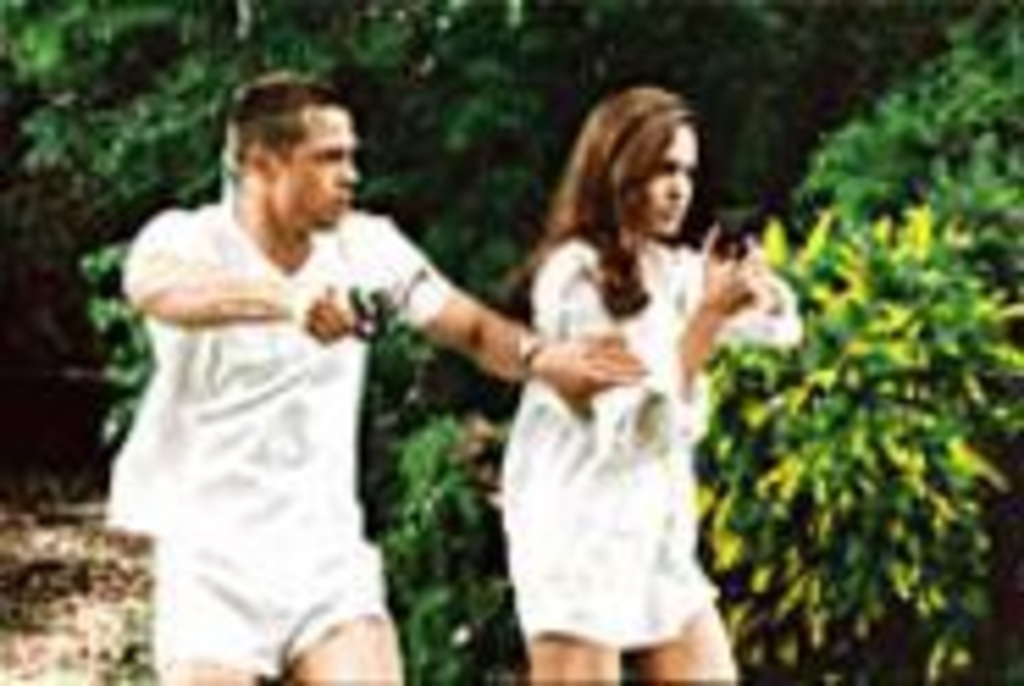 The pairing of Brad Pitt and Angelina Jolie, both in real life and on celluloid, is so obvious as to be almost cartoonish. So even though both are better actors than they need to be, they perfectly belong in this goofy, explosion-filled world. Married assassins trading bullets and smoldering looks … this is what the nation demands of them. The film itself is tissue-thin and has no reason to exist outside of its stars. A tight-orificed indie snob would tell you this is Hollywood at its worst, but it’s also damned watchable. No one on Earth gives two shits about the special features for a film like this, including the people who assembled them. The three commentary tracks will not be heard even by fans of Pitt or Jolie; a featurette on the evolution of a scene — actually a fairly interesting glimpse into the thinking behind a Hollywood blockbuster — will go unwatched. Next time, just give us a featurette called “Brad & Angie Do It.” — Jordan Harper

Not to be confused with the plain old Mummy Collection, this new set includes The Scorpion King, which has no mummies in it at all but does feature the Rock in his first (and arguably best) lead performance. On the off chance that anyone who likes these movies doesn’t already own them, this is a good way to get them for less than 10 bucks each; each set also contains a coupon to see Peter Jackson’s King Kong. The discs here are all the same as previously released versions, which offered decent commentaries and extras. But factor in the price of the Kong ticket, and you’re basically getting one of them for free anyway. — Luke Y. Thompson

March of the Penguins
(Warner Bros.)

It’s the nature doc that became the year’s phenomenon — perhaps because it was also the best film for kids, one full of sweeping, frozen vistas populated by cutey-pie penguins toddling off to do their thang. It’s astonishing, really, to contemplate what should be so obvious: As studios spend millions to animate animals that sound like Ray Romano, director Luc Jacquet proves that all you need is the real deal. Without sentiment (but not without love), Jacquet’s crews have captured the crunch and squawk of emperor penguins slipping and sliding over 70 miles of wasteland to mate. Those who thought Jacquet pushed too hard by trying to conjure human emotions in tuxedo-clad birdies should skip the fascinating bonus doc Of Penguins and Men, which recounts the difficulty and wonder in getting the footage. — Robert Wilonsky

The first misconception that this documentary clears up is that quadriplegics can’t move their arms. The second is that they cannot kick your ass. This film about wheelchair-rugby players lives up to the inspirational hype not because the subjects are angels but because they are raging, randy devils. Mark Zupan, the charismatic, goateed breakout star of the film, is such a caricature of a sporting fellow that you almost want to smack him — not that you could get away with it. The scads of extras show how broad the film’s appeal is: There’s a lowbrow clip of Zupan acting stupid with Johnny Knoxville, a middlebrow Larry King interview and a highfalutin Charlie Rose special. The deleted scenes are worth skipping, but an expanded scene of the athletes answering children’s questions is worth watching; kids, after all, aren’t too ashamed to be as curious as the rest of us. — Harper