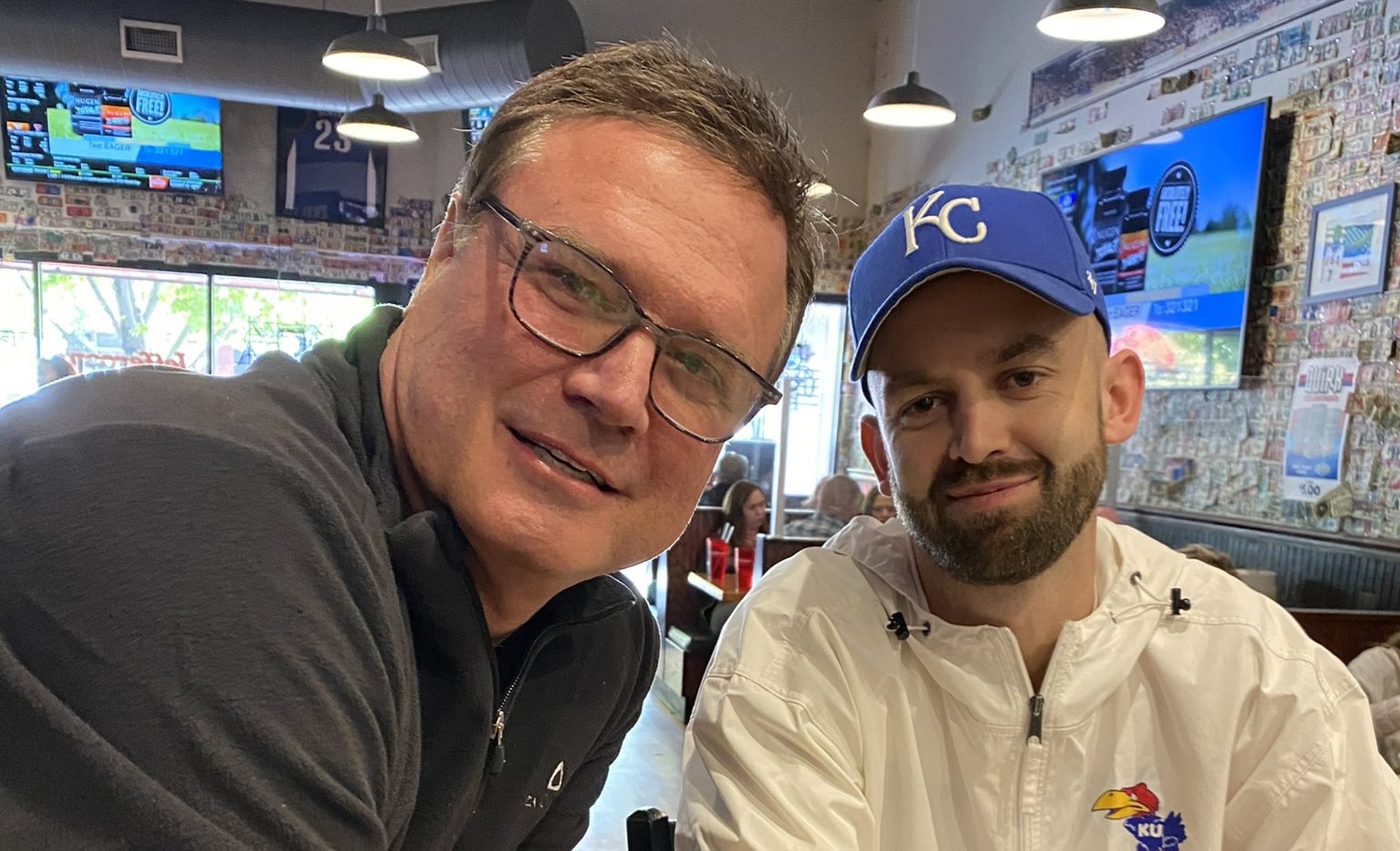 Braiden Turner (right) sits with Bill Self (left) at local favorite Jefferson’s after the Duke vs. Kansas game in Lawrence, KS. // Courtesy of Braiden Turner

Claims that “KU is a football school” used to be made by fans only in admittance of the less than stellar performance of the Jayhawks in the NCAAF—until recently.

Going on a 4-0 winning streak against Texas, Duke, and others in the league, the likes of Jalon Daniels and Lance Leipold are bringing fans back to David Booth Memorial Stadium in droves. And among that crowd this upcoming season, you’re likely to find Braiden Turner and the countless fans that were able to get tickets thanks to his generosity.

Braiden Turner runs the Ain’t No Seats podcast alongside his co-host Ryan Rinehart. Unabashedly a true red-&-blue Jayhawk, Turner takes to Twitter often (amassing 17.7k followers) with his keen—and often outlandish—takes on the Kansas City Chiefs and University of Kansas Jayhawks. It was with this following that he was able to reach out to the community and get kids, families, and youth groups to go out to the game.

Inspired by the recent performance of the University’s football team, Turner has given out 240+ tickets to see the Kansas Jayhawks, and plans to do so for the remainder of the season.

We hit up the sports aficionado and probed for his own takes about the hype he has garnered for the team.

The Pitch: Who are you and what do you do?

Braiden Turner: So right now, I sell merch. I do the podcast, Ain’t No Seats. And I have a little sports card company right now. I do whatever it takes, or I guess I just hustle to make money.

I’m a super caring person. That’s how I’ve been raised, my mom is by far the sweetest, nicest person I’ve ever met in my life. I was raised by her to treat people with respect and really care about people and I’m always looking out for others before myself. So I guess that’s basically how I describe myself.

Where were you raised?

I grew up in Olathe. But after third grade I moved to Shawnee, I went to Mize Elementary and then ended up moving to DeSoto, Kansas. I went to high school in DeSoto. So we lived there and was close to Lawrence. That’s kind of how I grew my love for KU, just being so close and going to the basketball and football games since I was a kid.

So you were kind of already born into the Jayhawk lineage?

Yeah, I’ve been going to Allen Fieldhouse and Memorial Stadium since I was a kid and luckily my dad raised me to be a KU fan. He was taking me to games as a kid and I just fell in love with Allen Fieldhouse. I’ve just been a diehard KU fan. That’s why I’ve been doing this ticket stuff. Basically, I want to see the stadium full, it’s been a tough 13 years. So that’s really what it’s all about, about helping kids and families that can’t make it to the games and getting the stadium packed.

Right, because as of yet you’ve been able to give out, I believe, 240+ tickets so far?

For the Tennessee Tech game, I made a video before the game trying to get some hype on KU football. I told people on Twitter that if  they can’t afford a ticket or they just wanted to go, I would buy them one. And once I started buying tickets, people saw that and they started donating on Venmo, which was just crazy to me.

Charlie Hustle donated $200 bucks. I had probably over $1000 in donations and that went towards buying tickets. Then we kind of rode that momentum towards the Duke game. Especially with what KU did on the road against Houston and West Virginia, they were 3-0 for the first time since 2009. 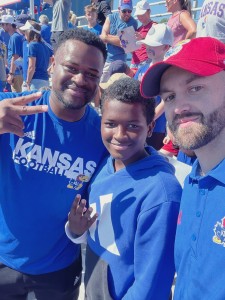 I had an anonymous donor — she didn’t even want her name out there, which is awesome. She donated $1,000, honestly that made me tear up like she didn’t want her name out there. She wanted me to find a youth group and somehow I did. Ky Thomas’s dad [Tobian Thomas] has a youth group with a ton of kids [Crush Nation]. He said some live in Topeka all the way to Kansas City, and we gave away 50 tickets to that group.

They sent me videos, pictures of their experience, saying thank you and it just made me super happy because it’s kids that don’t get to do stuff like that all the time. Just the smiles I saw on their faces at the game. That’s what it’s all about for me.

I still have people sending me Venmo just for what I’ve done and that’s gonna go towards tickets to either get people in or just give to my friends and family to go. So I’m pumped and I should be able to give tickets away to every game this year, so that’ll be fun.

So Are most of these tickets going to students, families or kids? Youth groups?

The first tweet about giving away tickets was basically for families that have never been to a KU game. [The anonymous donor] wanted it to go towards the kids which was just perfect for me because there’s obviously kids out there that aren’t as privileged and don’t get to do stuff like this.

So the first batch of tickets went to people that have never been to a football game there’s people sending me pictures of their family, wearing KU stuff. People that are just struggling with money right now like that.

KU’s been great this year. Tickets got up close to 100 bucks and we were able to get tickets to the KU ticket office for a good price. And we got into these families for free and they got to take their kids.

There are just people in my DMs thanking me so much for doing that for them. That felt amazing, but it felt even better to get to see them to go. I think another huge thing is maybe this will end up getting these kids to go to school in Kansas when they’re older.

You do this on top of the Aint No Seats podcast you co-host with Ryan Rinehart. What inspired you to get that jump-started other than your upbringing as a die-hard KU fan?

Yeah, it’s kind of funny. We have a bunch of mutual friends. We were in the same dorm freshman year at KU and I kind of got to know Ryan through social media.

I did a Bill Self impersonation thing and went on the radio. Kind of started to grow a little following and was just randomly tweeting out, ‘Man, I really want to start a podcast,’ because I have some decent connects through KU. Like I said, I’m I just love Kansas so much and the University football/basketball, all that so I just feel like I’m super knowledgeable. And one day Ryan actually DM’d me, ‘Dude, I really think we could kill a podcast together.’

So he said that and my friends were in my ear like ‘dude, you got to do it with Ryan’ and it was just perfect. It’s been perfect from the start. Our chemistry is crazy.

We’ve interviewed a bunch of KU legends. We know so many people through KU now and even just people that stop us and say they appreciate the pod, that means everything to me. We never really imagined having a following or people that actually listen to us. And they do and we’re just super grateful and we love KU fans so much.

I gained a good amount of new KU followers over the last few weeks. Could you guys please go follow the podcast (@AintNoSeatsPod) we are working hard & insanely excited to bring people football coverage this year👏👏we are very close to 8k followers & moving up in the charts📈📈 pic.twitter.com/GS5MgJLFYD

Speaking of outrageous takes, could I get yours on how you feel about Kansas being left out of the AP rankings?

I think it’s outrageous. And I’m obviously biased. I’m a die-hard fan, but just the product in the field like just the eye test. If you watch KU you know they’re one of the best 25 teams in the country.

Everyone knows that they’re not ranked because it’s Kansas football. But there’s no doubt in my mind: that’s the reason people hear Kansas football. It makes sense that they don’t want to believe the hype or they don’t trust it I guess because they’ve been that bad for the last 13 years.

So I think that’s by far the only reason they are in the top 25. Part of me is happy they aren’t, because I think the guys will be juiced up and ready to go Saturday against Iowa State.