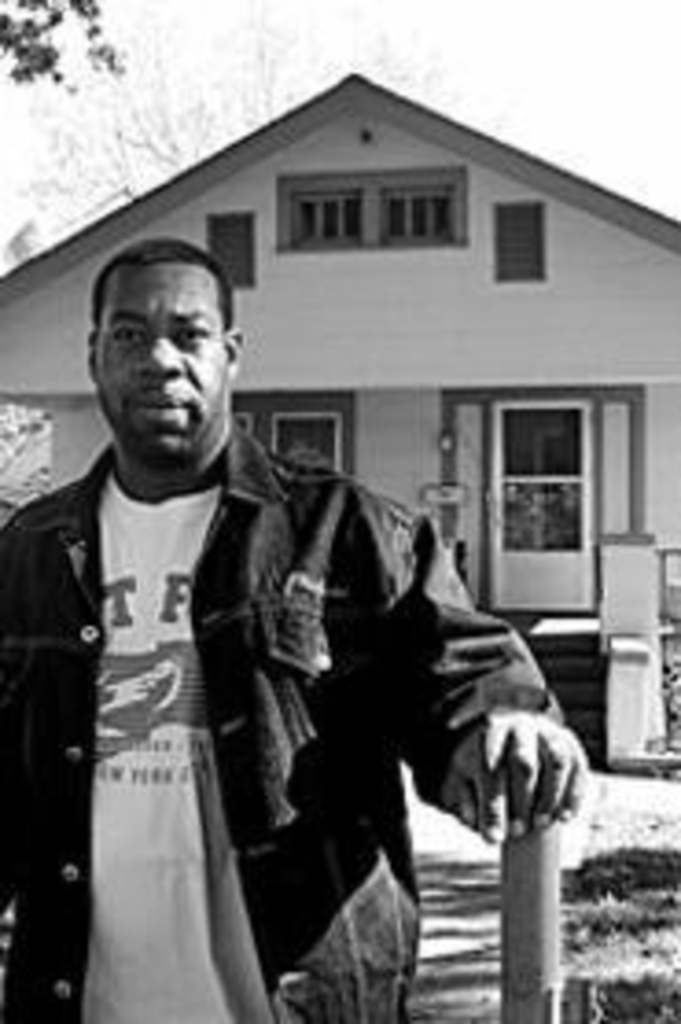 Earlier this summer, the 6200 block of Wabash was a horrifying place. Holes yawned in the middle of porches. At one house, the chimney’s missing bricks left a jagged scar from the ground to the roof — and a view into the house. Discarded mattresses and tires piled up between the sagging homes. In some front yards, the weeds were high enough to obscure the facades.

The only thing that would have possibly been reassuring about the block’s condition was if no one lived there. Except that people did. And they still do.

Cedric Workcuff, a 43-year-old sheet metal worker, lives at 6219 Wabash. He is one of four people who still occupy these houses.

Workcuff was supposed to move out more than a year ago. Since then, workers with the city’s dangerous-buildings demolition program have torn down collapsing houses around his. Before that bit of progress, Workcuff sent his 12-year-old son to live with another family member, for fear that the kid would hurt himself amid the refuse or be hurt by someone squatting in the abandoned houses.

But Workcuff is stuck in limbo as he waits for the last leg of a stalled process begun by the now-nonexistent Health Midwest hospital system, aided by the city’s now-dismantled Department of Housing and Community Development.

Before City Manager Wayne Cauthen eliminated Kansas City’s housing department in a surprising show of force earlier this year, it functioned like a headless octopus. A dozen independent CDCs, or community development corporations, used to be responsible for carrying out City Hall’s housing goals, building houses with grants from sources such as the federal Department of Housing and Urban Development. City Council members say all of this was done in unplanned, disconnected spurts. CDC leaders, such as William Threatt Jr., of the CDC of Kansas City, say that City Hall’s leadership was misdirected or nonexistent.

Threatt’s CDC of KC contracts work with the city, rehabbing old apartment buildings and building new houses, including those on Workcuff’s block. Now, though, it’s uncertain whether that contract will be extended another year. While he waits to find out, Workcuff can’t move.

“All my friends and their moms grew up around here,” Workcuff said from his porch one day this summer, “until they came and bought everything.”

“They” could mean one of several entities. Workcuff’s block of Wabash lies within a tax-increment-financed improvement project, which was started by Health Midwest in 1994. It is one of the bigger TIF projects ever initiated in Kansas City, called the Southtown TIF. Originally, there were three parts to it: a commercial development, a housing component and a health-care-related project. Fourteen proposed projects, identified by the letters A through N on a map, were divided among those three focuses. Ten years later, some of the housing and health-care aspects of the program are finished — six houses in the Blue Hills neighborhood were rehabbed between 65th and 66th streets on Olive, for example, and there’s a Blue Cross and Blue Shield data center on Research Medical Center’s campus. There’s a Walgreens and an AutoZone at 63rd and Troost and a new Osco drugstore at 63rd and Prospect.

But four other commercial projects have yet to be completed. Early in the process, staffers from the nonprofit Health Midwest’s Partnership for Change, the entity within Health Midwest that handled things like TIF projects and charitable contributions in the hospital’s name, approached the Blue Hills Neighborhood Association and asked what residents wanted to improve their community. The neighbors suggested a high-quality grocery store or further neighborhood-friendly development.

Health Midwest’s staff chose the area around Wabash and Olive just off busy 63rd Street, where studies showed that the construction of Bruce Watkins Drive, which closed off Prospect as a main corridor, was starving commercial development and creating supposedly stagnant, backwater swirls of neighborhoods. Workcuff’s house was in this commercial element of the TIF, Project G.

Partnership for Change then tried to attract a developer to come up with a plan. Threatt’s Community Development Corporation of Kansas City asked to be part of the project, offering to use $3 million in HUD dollars and federal grants to buy the houses on Olive and Wabash. Staffers at the CDC estimated the cost at $55,000 a house.

Most homeowners on Wabash took the buyout offers and got checks for their property, along with federal relocation-assistance money. But an independent appraisal estimated Workcuff’s house to be worth $71,000. He had bought the house from his mother in 1987; the two had taken good care of it, so it was in better shape than some of the neighboring properties that had gone up for rent over the years.

City records show that the first people on Wabash to settle for the CDC of KC’s offer, between September and November of 2002, accepted between $50,000 and $55,000 for each of their properties. A few received higher amounts, in the $60,000 range. The homeowner across the street from Workcuff received the largest settlement on the block, $72,000, in February 2003. Those who qualified for federal relocation assistance money took it and left.

Workcuff got a check for $71,000 in June 2003. He also qualified for, and was promised, the federal relocation funds. But by then, the CDC of KC had no money to help him move. CEO Threatt and Anthony Crompton, the CDC’s real estate director, had underestimated the cost of buying out all of the homeowners and had run out of money.

So Workcuff no longer owned his house. But he couldn’t leave.

Here’s why: Federal rules dictate that a homeowner’s relocation money is based on the condition of the house he plans to move into, says Edgar Jordan of the city’s Property and Relocation Division. HUD inspectors must determine that the new house is in the same condition as the previous dwelling or better. If Workcuff tries to buy another house, he risks the possibility that it won’t pass inspection from HUD eyeballers, who would then deny his relocation money.

To further complicate the issue, Health Midwest, which used to be in charge of the TIF district, is now out of the picture. The for-profit HCA bought the nonprofit hospital system in April 2003. Now HCA officials are deciding how much of the previous hospital’s charitable work they want to continue.

“We’re trying to figure out what to do with these four projects that don’t help HCA directly,” says Will MacArthur, Research Medical Center’s vice president of community affairs and the only employee held over from the Health Midwest administration. Besides Project G, MacArthur oversees the other three commercial redevelopments along 63rd Street, which include the New Landing Mall on 63rd and Troost, the old Metro Plaza shopping center, and an abandoned building on Meyer and Prospect formerly occupied by US Bank.

“I mean, we benefit by creating a good environment to do business in,” MacArthur says. He adds that he’s heard “from the senior level of HCA” that the group is committed to sticking with those projects until they’re finished. Until then, Workcuff gets to live in his old house rent-free, MacArthur points out.

Both MacArthur and Threatt are optimistic that they’re close to landing a developer who will commit to financing the last part of the project on Wabash. “They tell me it will be done in the next couple weeks,” MacArthur says. “Hopefully, when they come in with their plan, they will tell us how to get those five houses and people out of there to move on with their lives.”

Meanwhile, the task force set up by Cauthen has just completed a list of priorities to guide the city manager in molding a new housing department. At the final meeting at the end of October, a few task-force members touted the possibility of partnering city forces with funders from the private sector.

But that technique doesn’t look so brilliant from 63rd and Wabash.

That task force also wants to encourage homeownership in the city.

Workcuff remembers being a homeowner. But the next time he buys a house, he says, it won’t be in Kansas City. “I’ll move to Raytown or something,” he says. “Out there, they don’t put up with it. In the inner city, they don’t care.”