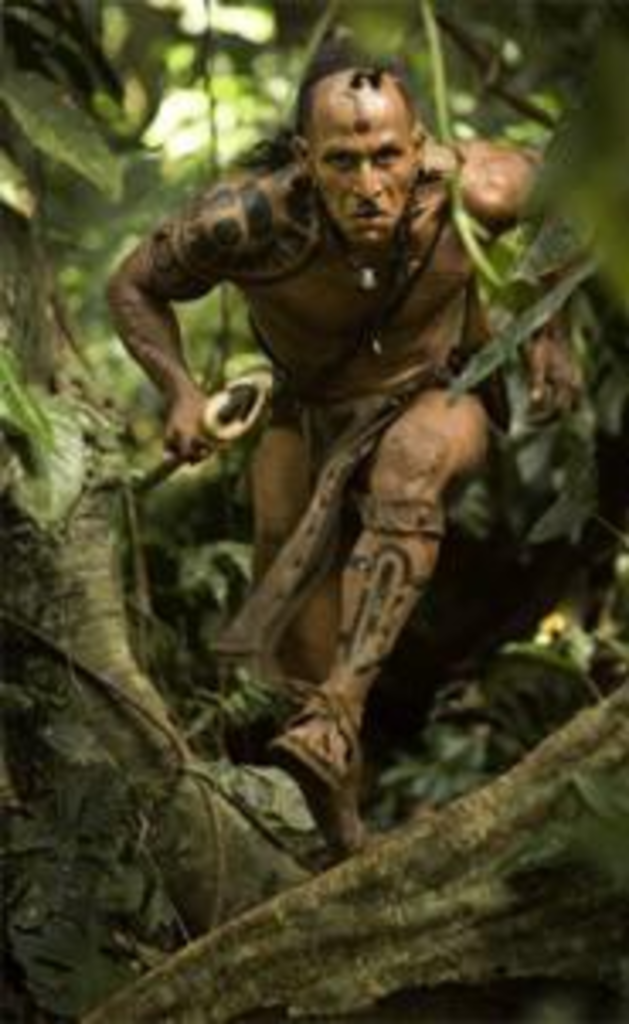 Apocalypto has a faux Greek title and an opening quote from historian Will Durant that ruminates on the decline of imperial Rome. It may seem like an odd way to comment on the supposed end of an imaginary, unspeakably barbaric Mayan civilization, but Mel Gibson means to be universal.

Not just a walk in the park with Mel and the guys (in this case, a large cast of mainly Mexican Indians speaking present-day Yucatec), this lavish, punishing picture is the third panel in Gibson’s ordeal triptych, The Martyrdom of the Braveheart , The Passion of the Christ and now The Misadventures of the Jaguar Paw.

Jaguar Paw (American actor Rudy Youngblood) is a junior citizen of a generally jovial, practical-joke-loving 16th-century Central American social unit that, given their good looks and family values (that is, keeping pet monkeys and having babies), might be called the Sugar Tit tribe. Over the course of Apocalypto‘s 140 subtitled minutes, he endures two calvaries. After the Sugar Tit village is overrun, sacked and more or less crucified by a marauding group of “civilized” Mayans, JP is dragged through the jungle, carrying his cross (as well as his brothers) to the Temple of Doom. After he’s saved from ritual sacrifice by a timely miracle — his Mayan captors are so degenerate that they’ve forgotten the astronomy they invented — there’s an hour of running barefoot, bleeding, back home to the cenote where he stashed his pregnant wife and child. JP dodges spears, vaults waterfalls and slogs through quicksand. It’s a nonstop sprint, complete with irate mama jaguar nipping at his keister.

Following the gory trail marked by Braveheart and The Passion of the Christ, Apocalypto is a blatantly sadistic spectacle — albeit not without a certain chivalry. Women are raped and children butchered, but Mel shows no taste for such savagery. (You might even call him protective. In one feeble bid for a PG-13 rating, the surviving children of Sugar Tit village are left to fend for themselves in the charge of a teenage baby-sitter.) Mel is a glutton for male punishment. There’s not a man in this movie who isn’t scourged, bashed or punctured — unless he’s disemboweled.

Unlike its predecessors, however, Apocalypto is unburdened by nationalist or religious piety — it’s pure, amoral sensationalism. By those standards, the most engaging sequence is played in the evil heart of the Mayan sacred city. Give the devil his due: Hieronymus Bosch or Matthias Grünewald would have appreciated Mel’s vision of paganism run wild. The place is a monstrous construction site-cum-marketplace where life is cheap (and so are the extras) and the blood pours over the stone monuments like molasses on grandma’s griddlecakes. It’s political, too: Gesturing muck-a-mucks in feathered masks rise from their human footstools atop garish temples to address the juju-dancing mob below.

No mean panderer he, Gibson has compared the “fear mongering” Mayan leadership to “President Bush and his guys” and their ritual human sacrifice to the deployment of U.S. troops in Iraq. He may also be recycling material from his canceled miniseries. The spectacle of a village torched and its peaceful inhabitants rounded up and marched to a remote industrial complex run by slave labor under the heel of gratuitously cruel, fetish-bedecked warriors, to be systematically mass-murdered on the altar of some irrational ideology, does suggest Poland circa 1944. There’s no denying this holocaust — complete with vast corpse-disposal pit — or is there?

Maybe the Mayans really did bounce human heads down the steps of their pyramids, but their civilization collapsed hundreds of years before the Spanish conquest, so how would we know?

“A lot of it, storywise, I just made up,” Gibson confessed to the Mexican junketeers who visited his set last year. “And then, oddly, when I checked it out with historians and archaeologists and so forth, it’s not that far [off].” Or far out, for that matter. Irrational as it may be, Mel’s sense of history does have a logic: JP’s trip to hell ends when the Christians arrive.