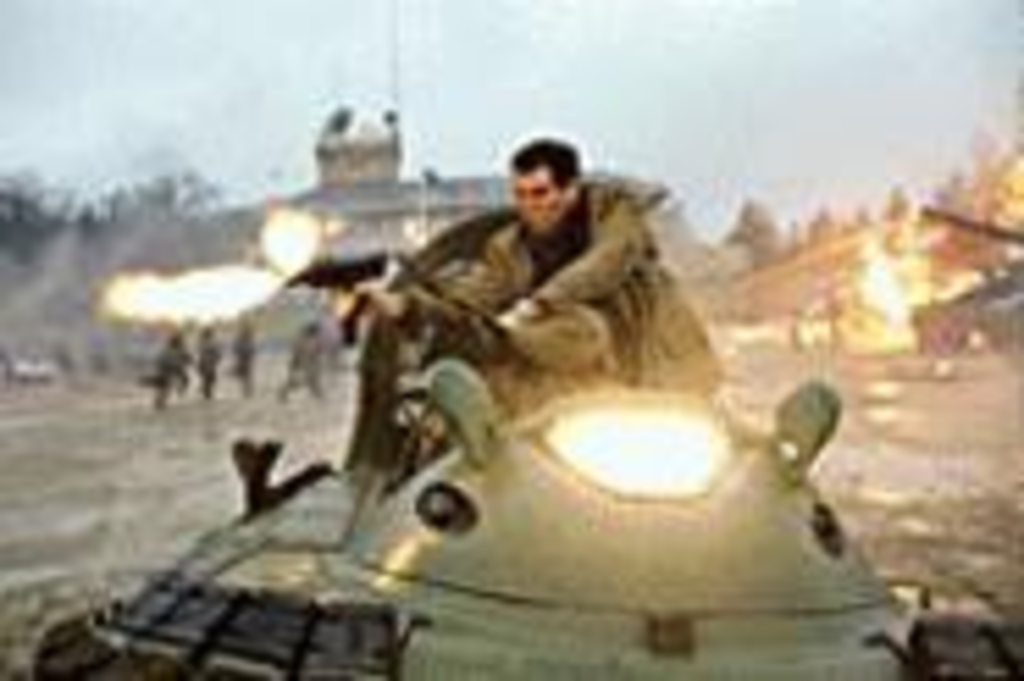 Second only to a film critic in terms of style and prowess, James Bond is still the ultimate action hero, and in Die Another Day, the twentieth official entry in the forty-year-old Bond franchise, the Irish Pierce Brosnan — though sorely lacking Welshman Timothy Dalton’s darker edge — now fully owns the character. He smartly incorporates Scottish Sean Connery’s muscle and veddy English Roger Moore’s mischief to make women want him and men want to be him … well, at least in author Ian Fleming’s enduring Cold War fantasy world.

Although the enormous waves of this installment’s opening surf sequence were shot by a second-unit crew, they reveal immediately that director Lee Tamahori (Once Were Warriors) and screenwriters Neal Purvis and Robert Wade (The World Is Not Enough) have their fingers on the pulse of contemporary cool. That means literally ice cool: One of the film’s primary set pieces is a massive, frozen mutation of the Sydney Opera House located in the Icelandic tundra. Even the opening-credit sequence — featuring Madonna’s tinny, idiotic title song — transforms the bump and grind of traditional Bond waifs into an S&M fetish fest. The introductory message is clear: This ain’t your daddy’s Bond.

The plot this time is refreshingly tight and smart, commencing with Bond landing on the Pukch’ong Coast of North Korea to intercept a transfer of thousands of diamonds and erupting into a grand exchange of ballistics with uppity young Colonel Moon (Will Yun Lee) and Moon’s sinister henchman, Zao (Rick Yune), whose name seems to be Korean for hot skillet! One bang-up hovercraft chase later, Moon meets his demise. But his disillusioned-general father (Kenneth Tsang) tosses Bond in a cell to be tortured for the next fourteen months, until British intelligence leader M (Judi Dench) grudgingly swaps Bond for the captured Zao.

The dirty, twitchy, long-haired and bearded Bond will surprise many viewers (some perhaps presuming they’re viewing outtakes of Brosnan’s Robinson Crusoe), and even beyond the cosmetics, the character’s revision is significant. Once he escapes — license revoked — from his own government, he’s a man without a country. On a quest to find the now-disfigured Zao and discover why the diamonds in the terrorist’s noggin bear the mark of British entrepreneur Gustav Graves (Toby Stephens, youngest — and least menacing — Bond villain ever), Bond wends his way around the world, but it’s very clear that the sun has set on his Union Jack many times over.

Tamahori pumps a tremendous amount of energy into his Bond movie, and it’s an electrifying ride. The stunt work in and around Graves’ ice palace is stunning, and Bond’s surfing and ‘chuting skills are bound to impress. It wasn’t apparent in his Along Came a Spider, but the director also exhibits a healthy sense of dangerous fun, whether he’s blasting the Clash’s “London Calling,” depicting a roguish, violent swordfight between Bond and Graves (attended by a very distracted-looking Madonna) or conducting a battle of the bouncing boobs between svelte American operative Jinx (Halle Berry) and dubious agent Miranda Frost (Rosamund Pike).

Quibbles are minimal: John Cleese ably replaces woefully departed Desmond Llewelyn’s gadget master Q, but his time onscreen — as in Harry Potter — is but a flash; the shoot-outs could have been tightened up; and Zao’s green Jag is cooler than Bond’s invisible Aston Martin. The main problem is that the über-villain — who has some paternal issues — doesn’t have the good sense to name his flying, solar-powered superweapon after a less-doomed mythological figure than Icarus. But if you’re not too concerned about logic and just want to watch Brosnan and Berry sexily kick ass in exotic locales, you’ll be more than satisfied by Tamahori’s take on the formula.