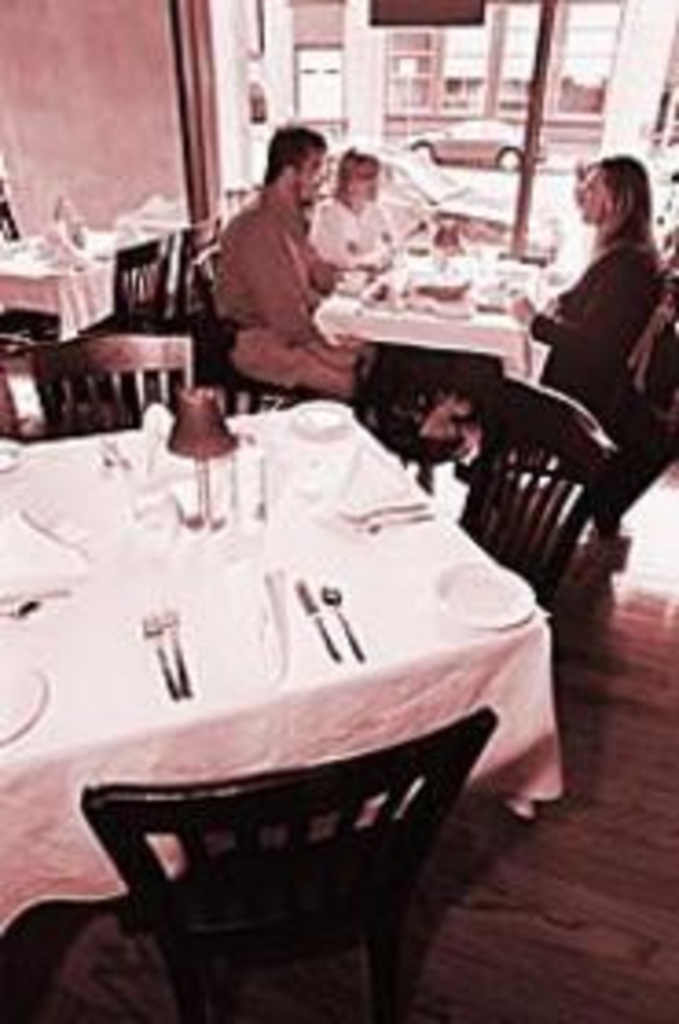 It’s been eons since downtown Kansas City was a hotbed of happening restaurants, so it’s always good news when any new restaurant opens north of the booming Crossroads District. In the case of Sienna Bistro, the pocket-size dining room just off the narrow lobby of the Quality Hill Playhouse, the news is especially hopeful.

Why? For one, it’s an independently owned restaurant in a time when it seems as if every new restaurant is a chain. And the place has some style, the look and feel of a grown-up, metropolitan joint. Not cutting-edge New York hipness — nor the antique glamour characterizing the Tuscan city of Sienna — but it’s more exciting than the space’s previous tenant (another Italian restaurant most notable for its noise level and the ugly paintings on its walls). “Bistro” is a French word describing an unpretentious restaurant, but by downtown Kansas City standards, Sienna Bistro is pretty sophisticated.

On the surface, anyway. It’s hard to pull off culinary razzle-dazzle in an absurdly tiny kitchen. There’s no real chef shaping the five daily entrées, the appetizers, and the handful of bistro dishes here; instead, there’s a yeoman cook tucked behind a curtain of heavy rustic fabric, passionlessly churning out recipes created by the restaurant’s talented owner, Brian Briggs. It’s not the best arrangement, and this three-month-old restaurant still has some kinks to work out.

Briggs and his wife, Shannon, are affable host-managers overseeing the front of the restaurant. With earth-toned walls, sleek wooden floors, and, along the far wall, an upholstered banquette dotted with soft pillows, the place has been altered into something cozy and elegant. The windows looking out on 10th Street have been hung with theatrical curtains, and diners can finally sit at a real bar while they wait for a table.

At press time, Sienna was still waiting for its liquor license, so the bottles sitting on shelves in front of the mirror were gathering dust. But until he can start serving from his own well-planned list of vintages, Briggs lets customers bring their own wine for dinner.

And though Sienna serves lunch in addition to dinner, the space is sexier at night, when the lighting is seductive and the high ceilings keep the intimate room from feeling claustrophobic (the tables are so close together, a sneeze can rattle a wineglass three tables away). Not surprisingly, Sienna is packed on weekend nights before a theater curtain. On one visit, my friend Sally and I were squeezed into a tiny window table at 7:30 p.m. Thirty minutes later, most of the well-dressed patrons were racing out the door, clutching their theater, symphony, or opera tickets.

That rush included the couple who had been sitting at the table next to us. They looked shell-shocked as we were seated, and we soon learned why.

“I’m terribly sorry you had to wait so long for your meal,” the waiter said as he set two steaming plates in front of them, his manner not nearly as starchy as his white apron. “The manager insists on taking care of your dinner tonight.”

They had waited an hour to get their entrées. But they were far more congenial about it than I would have been.

“I was actually more miffed about not being able to get a glass of wine with my dinner,” the lady whispered before starting to work on a dish of pasta tossed with roasted vegetables. “I just thought since this is a European-style restaurant, the service was very slow, like it is in Europe. They don’t gobble down their food and run out the door like Americans do, you know.”

A charming and humane perspective, I thought, looking down at the menu for something to gobble as quickly as possible. Not only was I starving, but I also was a starving American and I wanted food now. Luckily the waiter scurried over with a basket of warm bread and a little white bowl filled with sea-green olive oil. We ordered an appetizer of roasted garlic and goat cheese, which arrived quickly: a fat fragrant bulb, its skin as dry and crumbly as ancient parchment but the plump cloves inside soft, juicy, and easy to spread on triangles of crisp toast. We embellished them with a bit of fresh-tasting marinara from a pool on the plate and a dab of the goat cheese, served in a big, fluffy, warm ball. I wished the bruschetta had been as garlicky, but we had to be content with the mild pesto and mozzarella cheese spread over the thin slices of bread sprinkled with chopped roma tomatoes; they were gently toasted but still not crusty enough.

We could have made a great little pre-theater dinner, however, out of that garlic-bulb appetizer and a house salad or Sienna’s hearty corn chowder (a creamy version made with canned corn and hunks of chicken). Simple house salads (they come in two sizes) are the only kind here, though they’re artfully arranged: mixed lettuce greens surrounded by a pile of julienne carrots in one corner, a bit of purple onion in another, and, in the third, a little mound of chopped black olives (“Boring canned American olives,” Sally said, grimacing). The pink raspberry vinaigrette was nice and tart, but I preferred the thick, luscious dressing made with parmesan and cracked pepper.

Sally, noticing the juicy pork chop that someone nearby was consuming with American gusto, ordered the same for dinner. And while I debated between the sesame-seed-crusted, pan-seared tuna and the roasted Tuscan chicken, the server decided for me: “We’re out of the fish,” he said. Luckily for me, the chicken was perfectly roasted, tender, and succulent, with just a splash of a piquant lemon dill cream sauce. Sally’s pork chop was splendidly roasted, but we both thought its whole-grain mustard sauce was a shade oily and wondered whether it would have been more flavorful with a potent Dijon. And we were disappointed by the soggy potato pancake and the slightly bitter cooked zucchini that accompanied our dinners.

I had, however, greatly enjoyed two of the bistro sandwiches on an earlier visit. The toasted panini-style number was stuffed with goat cheese, slices of thick portabella mushroom, and roasted peppers. Better yet was a Tuscan tenderloin of delicate beef, caramelized onion, greens, and a mild horseradish sauce on Italian bread. For an inexpensive pre-theater treat, I can’t imagine anything better than one of those sandwiches, a cup of potent Kenyan coffee, and a wedge of Sienna’s airy chocolate mousse cake (made for the restaurant by “a guy named Bendy,” Briggs says). And if the restaurant stayed open past 10 p.m., the same combination would make for a great post-theater meal too.

But Kansas City’s Sienna Bistro isn’t taking all Tuscan traditions to heart yet — unless more customers start insisting on late-night suppers. If this restaurant really were in Sienna, the dinner hour might continue on past midnight. But Sienna already has the Italian style; now it just needs the attitude.