Here’s the Rub: Joys and ethical minefields for pandemic cookouts 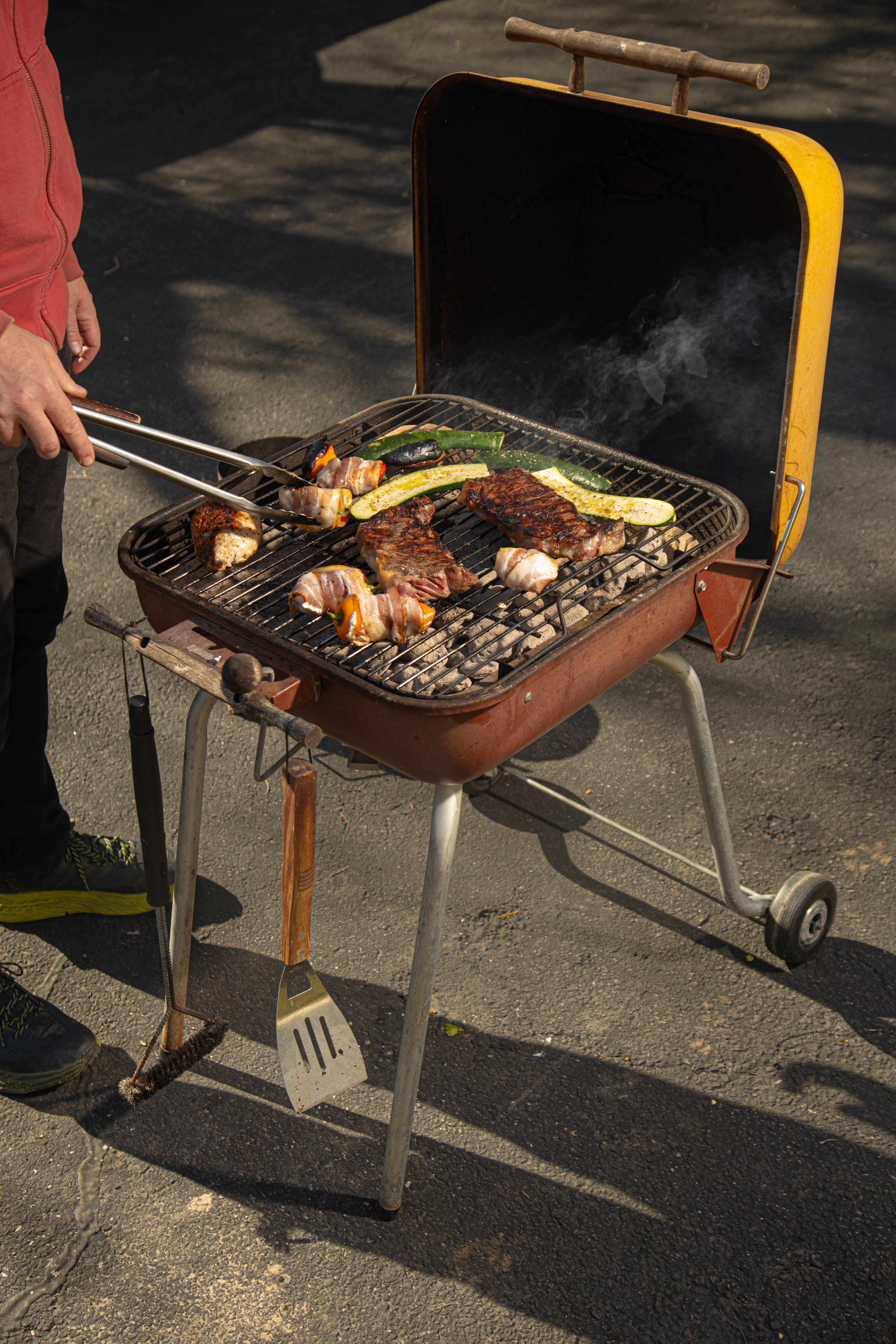 Grill to your heart’s content this summer. // Photo by Zach Bauman

Grilling is as synonymous with summer as illegal fireworks stands and the coconutty smell of sunscreen, but in the year of Coronavirus, the hobby has taken on new significance and popularity. Some reasons are obvious: it’s warmer outdoors, we’re still largely at home, beyond bored, restaurants are closed. Plus, all of the other well-covered challenges of our new not-normal.

Other reasons to regularly fire up the charcoal are less obvious. Grilling gets us outside and away from our too-familiar walls, and cooking out (much of cooking, really) can generate warm feelings of family and nostalgia. For some, occasional distance hangouts with friends outdoors generally seem to be safer and more manageable than inviting anyone into our homes. As well, many cooks who have experienced meat shortages at grocery and big box stores have been visiting local butcher shops and specialty stores, often for the first time. There are many are experiencing both new flavors as well as products and practices that offer a stark contrast to those coming out of the Coronavirus-infested meatpacking plants owned by companies like Tyson, National Beef, and Cargill.

Though essentially all restaurants in Kansas City are still cobbling together some version of survival with a mix of curbside service, delivery, and some drastically limited in-house seating, business at local butcher shops is, perhaps surprisingly, booming. 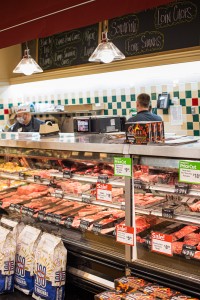 Stuart Aldrige of Broadway Butcher Shop in Midtown says he’s never seen anything like this, and is struggling to keep up with demand. “We have seen a pretty dramatic spike in sales,” he says. “In the first two weeks that this was going on, we saw a fair bit of, well, you could call it quasi panic buying. People would ask: What do I need to keep my freezer? What do I need to stock up on?” Customers, he says, have in recent weeks have by and large settled down as far as panic buying goes, but that his overall sales volume is still way up, and new customers walk into the shop every day. Many of them have never been into a butcher shop. He also adds (on more than one occasion during our conversation) that much of this success, if you can call it that, makes him feel somewhat guilty, as so many of his friends in the food and beverage industry are currently out of work or are struggling.

Alex Pope, owner of Local Pig Butcher Shop and Pigwich, has had a similar experience. Though Pigwich, which generates the majority of revenue for Pope and his team, has been closed since March, Local Pig itself has seen a significant uptick in sales. The butcher teams at Fareway Meat Market (formerly McGonigle’s) also told me that business has been surprisingly brisk [they asked not to be directly quoted in this piece, noting they didn’t feel that they could speak for the Iowa-based Fareway at large]. The Upper Cut, a specialty meat shop north of the river that specializes in Akaushi and Angus beef, also says sales are high enough they sometimes struggle to meet demand.

Patrick Montgomery, owner and operator of KC Cattle Company, which both raises and sells American wagyu from its ridiculously pretty ranch in Weston, Missouri, says that his company sells out of product as quickly as he can stock it. KC Cattle Company’s sales took off after Food & Wine Magazine lavished praise on its wagyu hot dogs last fall, but now he is consistently selling out of everything, including steaks, roasts, and even ground beef, usually within an hour of updating his shop each Tuesday. 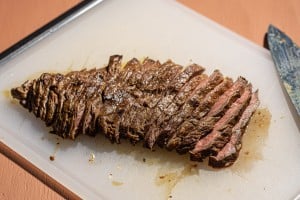 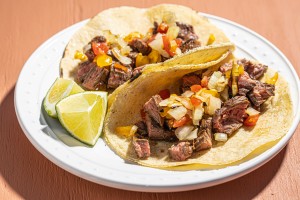 He says that “Even in January, [our local delivery service] was probably only making up about five percent of our sales. It has grown to 20, 25 percent. Then the other portion of that is, you know, every other state in the union. At first we had a lot of sales to people in California, Washington state, New York. But since the shelter in places basically took effect in all of the States after that, orders come in from everywhere.”

So why are people utilizing local butcher shops and producers more than ever, and what are they cooking? A lot of things, it turns out. 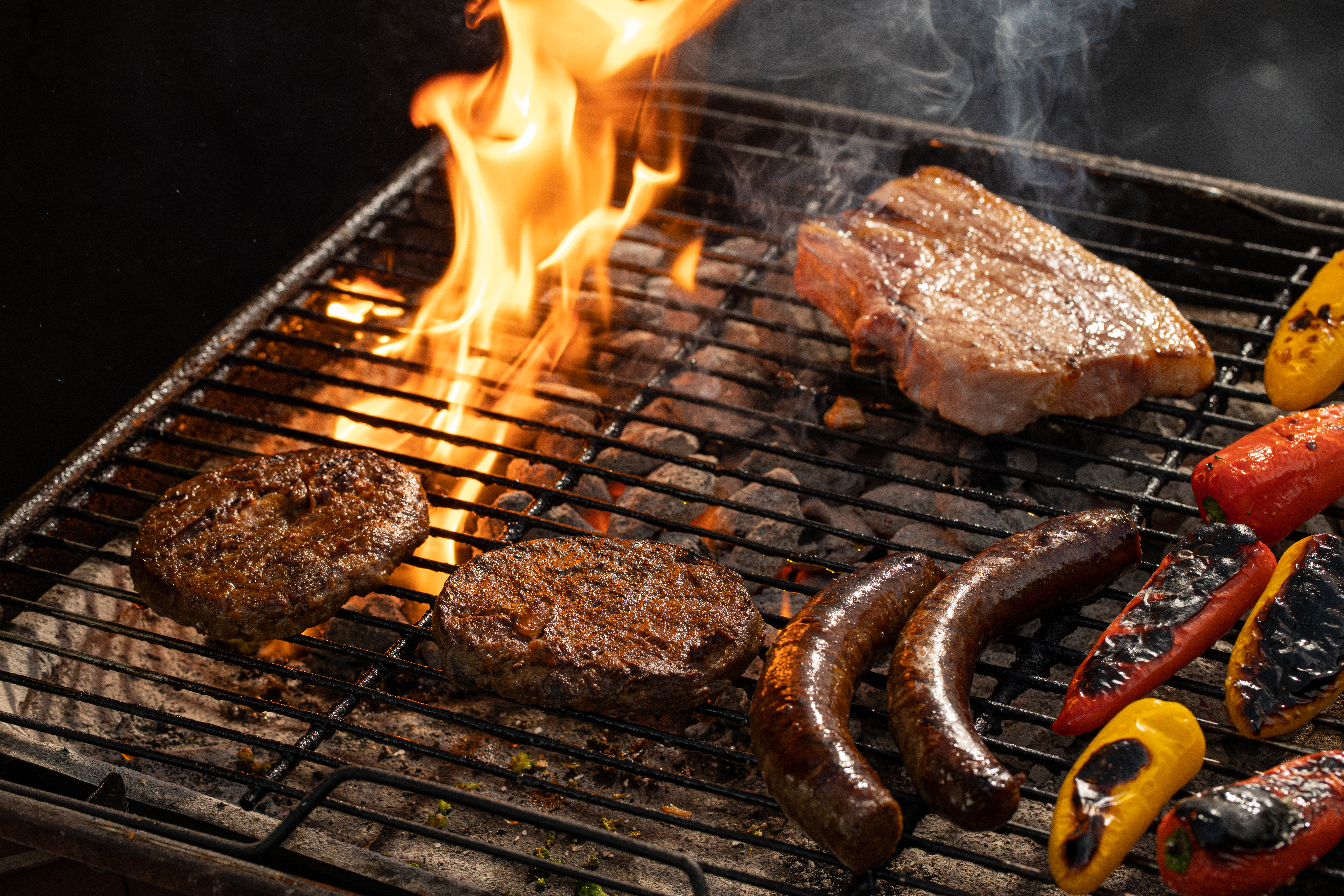 Grilling up meats from the Local Pig. // Photo by Zach Bauman.

Michalis Koutsoupides, a musician and professor at Avila University, says it helps him feel connected both to his home in Greece as well as to his friends here. “I have kept a family tradition going of cooking out in recent years by inviting friends over for cookouts and making Greek kebabs, but now I find myself cooking for one or a few friends at a safe distance. It gives me a sense of togetherness now that we’re all apart, because of COVID. Also, for fear that soon we might run out of meat soon!” Koutsoupides cooks steaks or kebabs a few times a week on either a trusty black Weber or on a small backyard spit.

Zach Bauman, a regularly featured photographer for The Pitch and other local publications (this piece features his work, as well as several dishes he prepared in the past few weeks), has ramped up his home grilling and smoking considerably. He cooks out at least a few times a week, often more.

“Being outdoors provides a little relief from being cooped up in the house,” he says. “I like figuring out what I’m going to put on the grill or in the smoker and researching how I want to prepare it. The longer it takes, the better. The end product really doesn’t even matter that much—it’s just fun to make something, and if it isn’t terrible, that’s a bonus.” Bauman has been smoking pork butts and grilling sausages, steaks, and vegetables like bell peppers and zucchini. 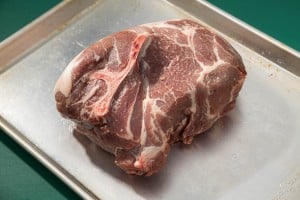 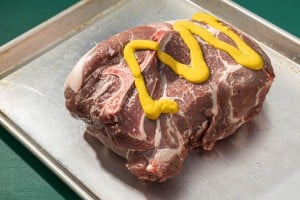 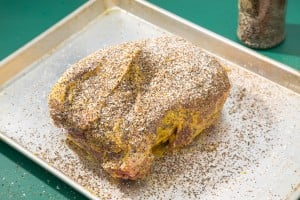 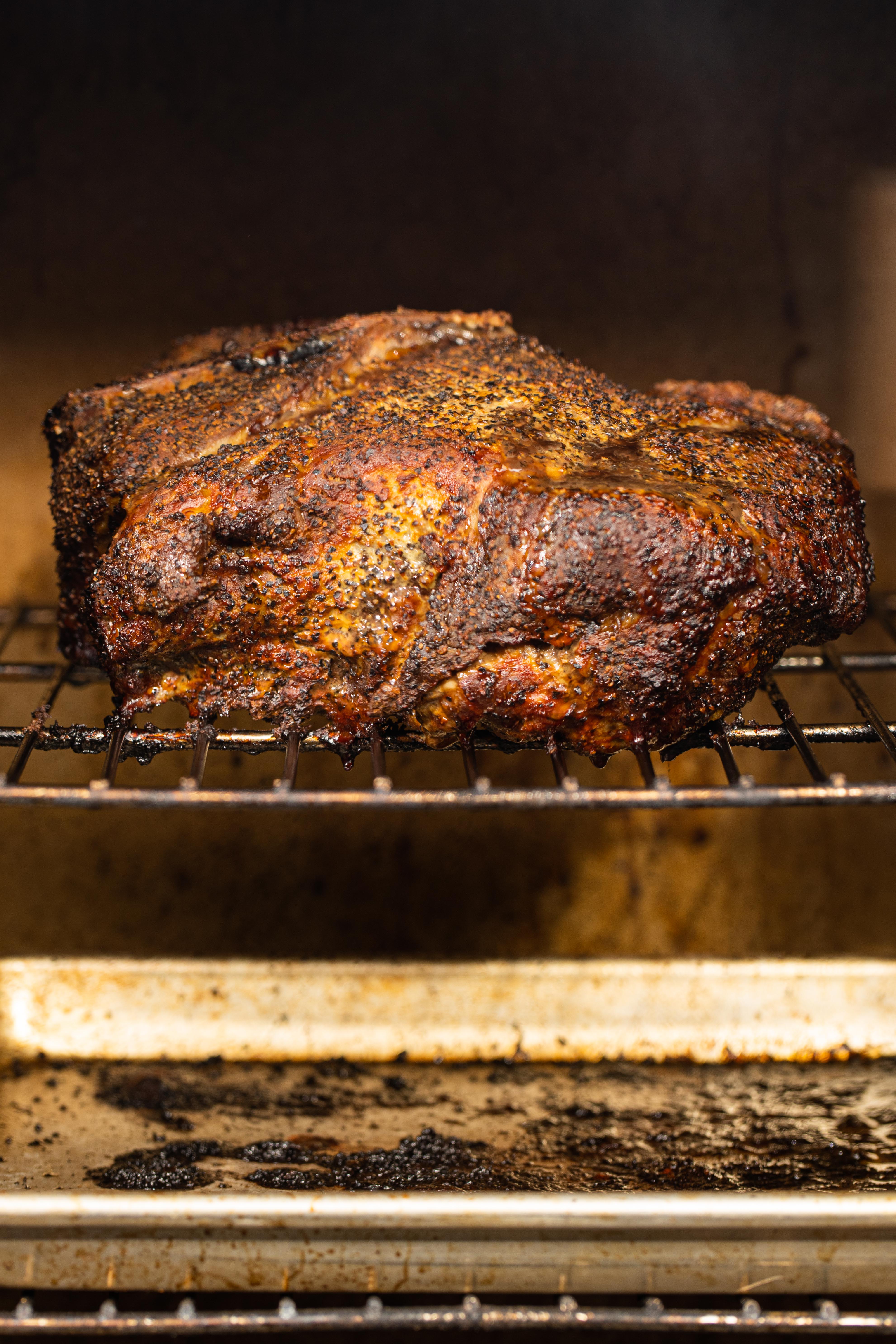 Alex Pope at the Local Pig says people have been buying a lot of chicken and beef in an effort to stock up, and Stuart Aldridge at Broadway Butcher says that he’s selling a lot of everything he stocks, including fish, but he’s seeing many customers coming in looking for specific items they are having trouble locating at their regular stores, such as brisket. K. Meisel, who owns Leeway Franks in Lawrence with her husband Lee, says that they “are cutting more chops and briskets as a result and find it a challenge to keep up with the demand for ground beef as we grind our own in-house.” At Fareway Meat Market in Waldo, customers are particularly loading up on ribs, ground beef, beef skewers, bacon-wrapped jalapeno poppers, and yes, lots of brisket—all traditional backyard fare.

At this moment, Kansas Citians are not experiencing significant meat shortages, but customers at grocery stores like Price Chopper, Hen House, and HyVee are seeing limits being placed on quantities they may purchase, and certain items have become more difficult to find (KC, you are one brisket-obsessed town). This is mostly due to well-reported outbreaks of Coronavirus in meatpacking facilities across the country, and across the world. Workers in these facilities, which are extremely dangerous and ethically compromised work environments even without the threat of highly contagious disease, are testing positive for the virus at staggering rates, and many are still being permitted to work despite positive test results. In St. Joseph, just an hour’s drive north of Kansas City, for example, over four hundred workers tested positive for Coronavirus in early May, in a single pork processing facility run by Triumph Foods. Workers there told a reporter from The Kansas City Star that those who have tested positive are permitted to return to work if they aren’t showing symptoms, and testing there is not mandatory. So—objectively—we should feel at least conflicted about our supply chain—or in other words, our food and the people who work in dangerous environments for very little money in order to bring it to us. 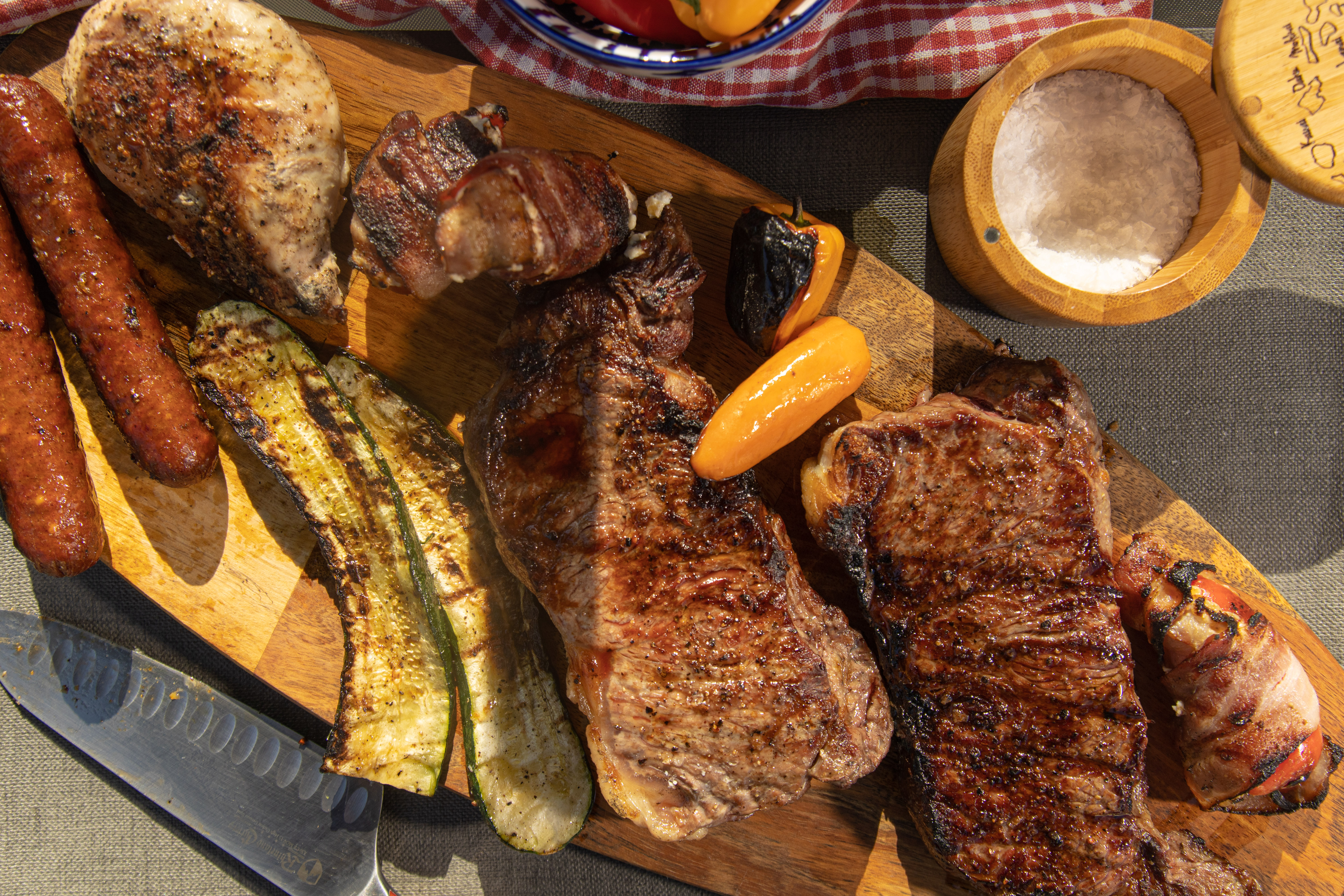 Kansas City’s mom-and-pop butcher shops and specialty stores present an alternative for all your cookout needs—one that is safer for workers involved in the supply chain, less taxing on the environment, and generally is far less cruel to the animals we eat. Local shops including Leeway Franks, Broadway Butcher Shop, Local Pig, Bichelmeyer Meats, The Upper Cut, and Paradise Locker Meats, as well as farmer’s market vendors like Black and Gold Farms and Bauman’s Cedar Valley Farm (both regulars at the Overland Park Farmer’s Market), are all open for business. Aldrich at Broadway Butcher Shop notes that he is not seeing shortages from his producers, which operate on much smaller levels than Triumph Foods or companies like ConAgra and Tyson. What he is seeing are rising prices.

“We’re just now getting to the point where, because things like beef are a commodity, prices are starting to go fairly high [due to demand],” he explains. “And because we are a natural shop [no hormones, little or no use of antibiotics], we’re already going to be a couple dollars higher across the board.” 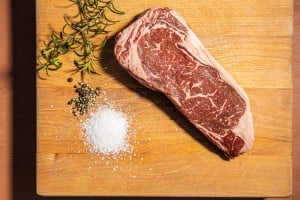 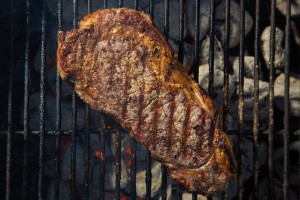 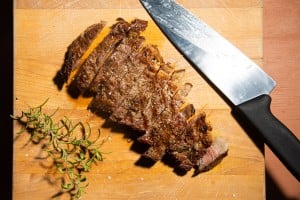 Alex Pope at Local Pig says that there is continual pressure on his supplies because he sources from small farms in the Kansas City area exclusively. He says, “We get 100 percent of our meat and eggs from small family farms in Missouri and Kansas—most within 50 miles of KC. We have developed our own supply chain apart from the factory farm supply chain. Our biggest issue now is that we are trying to scale up our supplies, but the small slaughterhouses we use are being inundated with demand.”

Aldrich, Pope, and Patrick Montgomery of KC Cattle Company all express genuine sympathy at the challenges they see their families, friends, and communities experiencing. But they also all feel that the Coronavirus presents an opportunity for consumers and home cooks to learn more about where their steaks, burgers, and brats (and all of their other food) come from, and what the real cost of cheap, extremely available meat actually is.

“I think it’ll probably be a pivot point for how people purchase their protein items,” says Montgomery. “It’s eye-opening to know where the product’s actually coming from, where it’s being sourced.” Aldridge expands on the same idea: “If you visit a shop like mine, or Alex at Local Pig, or Bichelmeyer’s over in KCK, you get people like us who are doing this because we have a passion for it, and we truly do care that we want to feed our community with well-cared-for food, and well-cared-for workers.”

Where to Get Your Grill Fix: 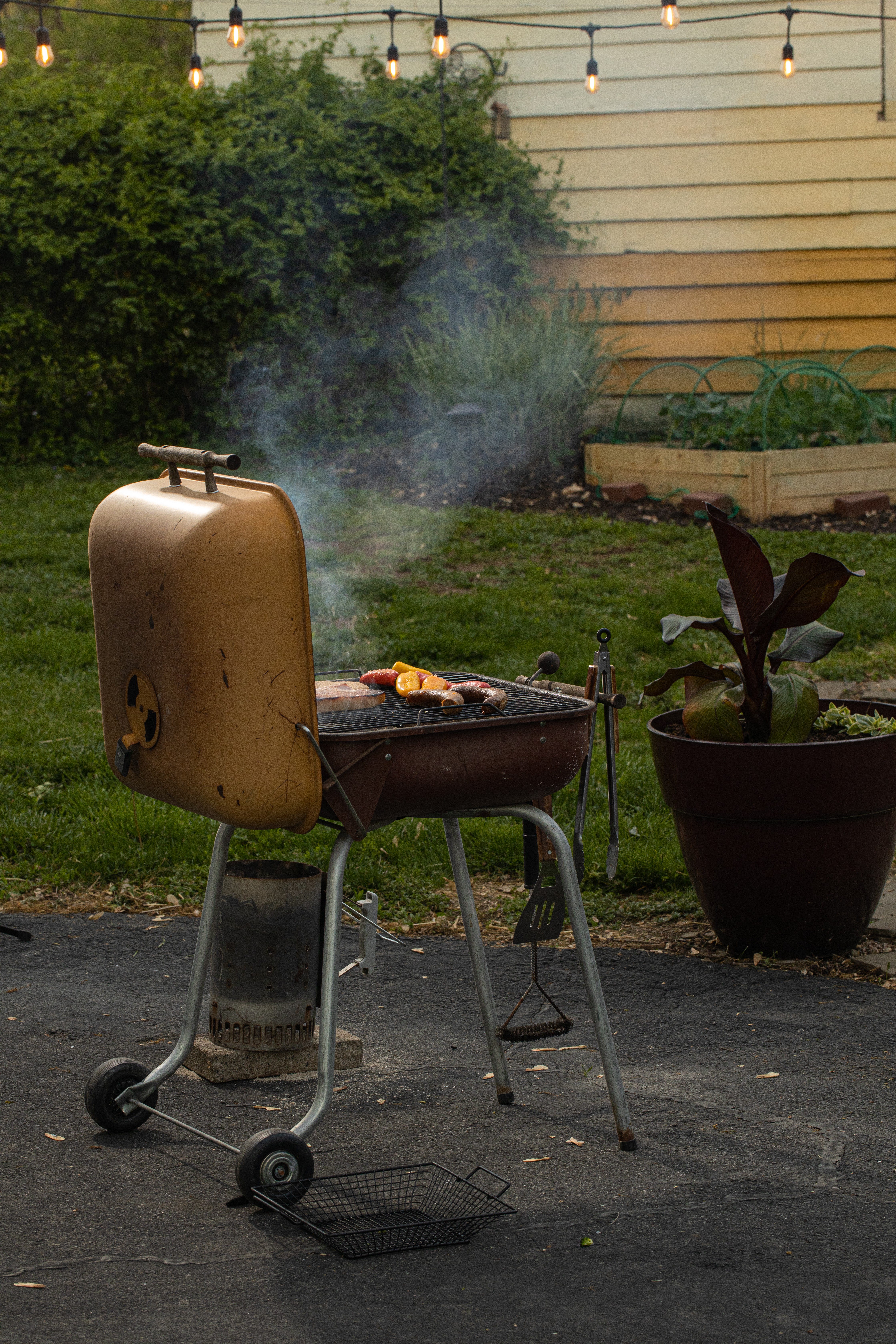