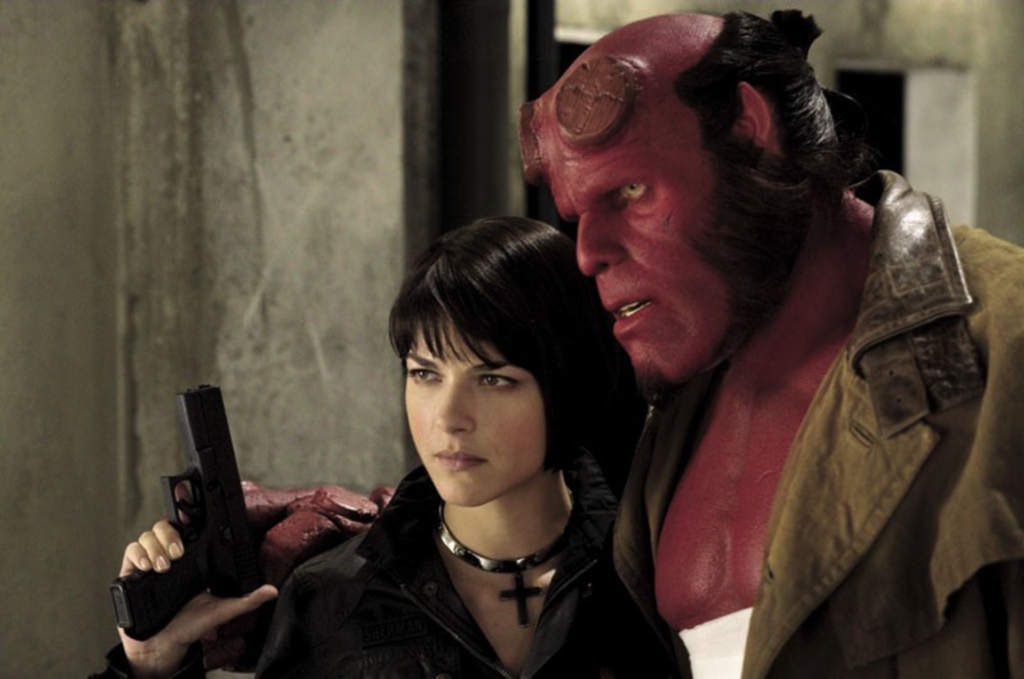 Hollywood’s Endless Superhero Summer rolls on with the arrival of Hellboy II: The Golden Army from Pan’s Labyrinth director Guillermo del Toro. But before this review goes any further, I must confess — head hanging low in shame — that I haven’t read a comic book since I was 12 years old. That means I’ve never read a Hellboy comic, the first of which appeared in 1993 (when I was well past 12). In fact, I’m not so sure that I’d even heard of the big red lug until 2004, when del Toro made the first Hellboy movie, though I pretended at the time that I knew all about him. These days, not reading comics and graphic novels marks one as a pop-culture loser, which goes to show you how topsy-turvy the world is. In my day, comic-book kids got beat up.

A primer, then, for the secretly uninitiated: Hellboy, or “Red,” as his friends call him (played by Ron Perlman in the films), is a demon from hell (literally) who entered this earthly realm when Hitler’s minions opened a portal to you-know-where while attempting to form an alliance with the big guy down below. Rescued by the Allies and raised by a gentle British professor (John Hurt), Hellboy has burnt-red skin, a long tail, thick horns on his forehead (filed down to stubs) and a massive right arm made of stone — the “Right Hand of Doom” in creator Mike Mignola’s comics. Red packs a mean right punch, but luckily, raised on Howdy Doody and Santa Claus (as a Hellboy II flashback tells us), he’s fighting on the side of man, not with the evildoers who keep coming up from hell. Score one for nurture versus nature.

In the new flick, Hellboy and his girlfriend, Liz (Selma Blair), who can turn herself into a ball of fire at will (or when she’s depressed), are living in a government-run bunker below Manhattan, hunting demons. As Liz prepares to announce her pregnancy, up pops the centuries-dead-yet-still-stylish Prince Nuada (Luke Goss, channeling David Bowie) to scour Manhattan for a shard from a magic crown that, when reassembled, will raise the Golden Army, whose soldiers turn out to look like high-end, Neiman Marcus–catalog versions of Transformers toys.

Despite the rosary beads that Red wraps around his wrist and the crucifix at Liz’s throat, Hellboy II doesn’t have much on its mind, but few will care, given that del Toro and his stellar Pan’s Labyrinth team, including Oscar-winning cinematographer Guillermo Navarro, stage one virtuoso set piece after another. Chomping on his cigar, the otherwise uninteresting Red hulks out against not only the vast Golden Army but also tiny, pissed-off tooth fairies; a magnificent, multi-winged, multi-eyed Angel of Death (Doug Jones); and, in the film’s action centerpiece, a 70-foot forest demon that looks like a leaner, meaner cousin of Lord of the Rings‘ mighty Treebeard. (Del Toro, of course, is set to direct The Hobbit for Rings mastermind Peter Jackson.)

Smitten still with the movies of his youth, the 43-year-old del Toro joyfully fills his movie with references: the cantina in Star Wars, the Alien pod field, Ghostbusters‘ marauding doughboy. A B-movie director (see: Mimic, Blade II) with a touch of the poet about him (see: The Devil’s Backbone), del Toro was elevated to capital-A artist with 2006’s Pan’s Labyrinth, a Nazi-era Through the Looking Glass fantasy with underworld creatures so strange and wondrous, few seem to notice that the film itself is mean-spirited and unpleasant. With this new Hellboy, del Toro is clearly coasting — as Steven Spielberg often does in between dramas. Though there’s no shame in having some summertime fun (and making some summertime money), the question hangs: Is del Toro a mad genius or an imaginative hack? Or both?

Time and hobbits should tell the tale. Meanwhile, the beautiful, violent (but gore-free) Hellboy II will amaze 12-year-olds and amuse their parents.